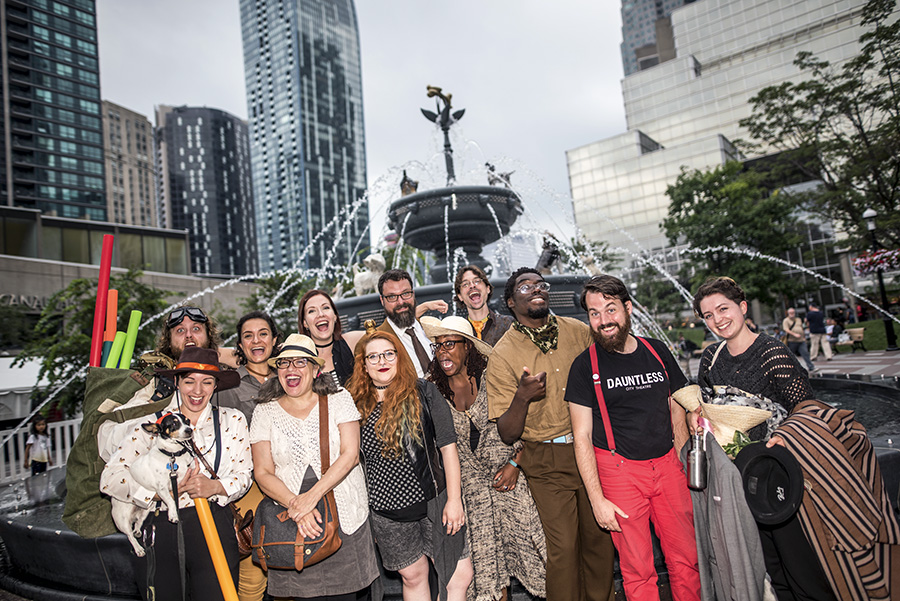 The cast and crew of Two Gentlewomen of Verona, on now at Berczy Park. PHOTO: Dahlia Katz

That might as well be the nickname for Dauntless City Theatre’s creative reimagining of Shakespeare’s comedy Two Gentlewomen of Verona, on now at Berczy Park for Bard in Berczy (that’s the park with the dog fountain near the St. Lawrence Market).

The company, which prides itself on being a feminist, inclusive and diverse operation that is focused on gender parity, takes it to the dogs for this summer show by embracing the park’s new fountain and letting it become inspiration for the show and its design.

“When we learned that the fountain was coming with the reno of the park we knew that we needed to lean into the fountain and produce our version of Shakespeare’s only play featuring a dog, the Two Gentlemen of Verona,” said designer/producer Stevie Baker.

Two Gentlewomen of Verona is considered by some to be Shakespeare’s first play, and is not often performed. Dauntless City’s take, directed by Scott Emerson Moyle, begins with the lead, Valentine, played by Beacher Naya Guzman, leaving her lifelong friend, Proteus, to go backpacking in Italy.

Valentine begins a romance with the duke’s son, Silvio, and complications ensue when Proteus joins her in Italy and sees what Silvio has to offer.

The show is a “true site-specific production,” explains Baker. “We have no set in the traditional sense. The park serves as the set of our show with only a pop-up tent masked as the Outlaw Hideout to serve as our backstage and holding area.”

Costuming takes inspiration from the canines, with each character’s costume based on a different dog breed.

“The Duke and Silvio are Bull Mastiffs, Speed is a Sheepdog, Valentine is a Pointer and so on. The performers all have a touch of colour in their accessories to invoke the feeling of colourful dog ID tags. Look closely and you will even find a few dog collars,” said Baker.

This weekend is the last chance to check out the performance, with shows Friday and Saturday, Aug. 25 and 26, at 7:30 p.m. and Sunday, Aug. 27 at 1 p.m. Performances are accessible and pay-what-you-can.