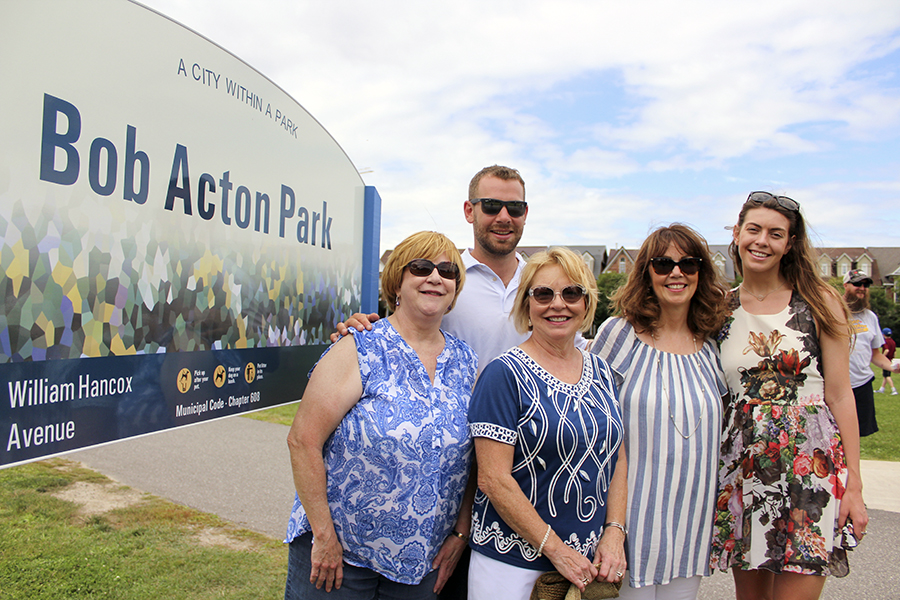 The legacy of local hockey coach and community builder Bob Acton was out in full force over the weekend, with well over 100 people gathering to celebrate the man and the park now in his name.

Earlier this year, city council voted to name the park on William Hancox Avenue, steps away from Ted Reeve Arena in the Upper Beach Estates, after Acton, the beloved hockey/softball coach and mentor who died last year from ALS, commonly known as Lou Gehrig’s disease.

Family members and officials, including ward 32 councillor Mary-Margaret McMahon, who led the push for the naming at city hall, cut the ribbon on Bob Acton Park on Saturday, Aug. 19. Attendees enjoyed a BBQ sponsored by Community Centre 55, entertainment by The Lost Boys, and catching up with old friends and teammates.

“It’s just fantastic,” said Acton’s friend and coaching partner Paul Pellman, of the turnout. “It says so much about Bob’s connection to the community.”

Pellman spoke about Acton’s legacy earlier this year at city hall, noting that the name Bob Acton carries with it a tremendous amount of goodwill because of Acton’s commitment to the community, and young people in particular. Having a park named in his honour will help carry that goodwill forward, he said.

There are plenty of Acton’s former students acting as ambassadors of their coach’s lessons and spirit, too.

William Dawson and Finn Harding, both 12, came to the BBQ straight from a win with their baseball team, the Jakobek Jets. The duo started skating with Acton when they were tykes.

“I learned how to skate with him,” said Dawson. “He was serious, but always positive.”

Dawson said the importance of work ethic is a lesson he learned from Acton.

Harding, who has a cameo on Acton’s website of when he was a young skater, echoed Dawson’s statements.

“He helped us always be positive and taught us to work as hard as you can,” he said.

Harding plays defense, and said one day he wants to make it to the NHL.

But for now, he’s happy that his former coach has a place in the spotlight.

“I think it’s great they’re doing this,” he said. “So many people showed up.”