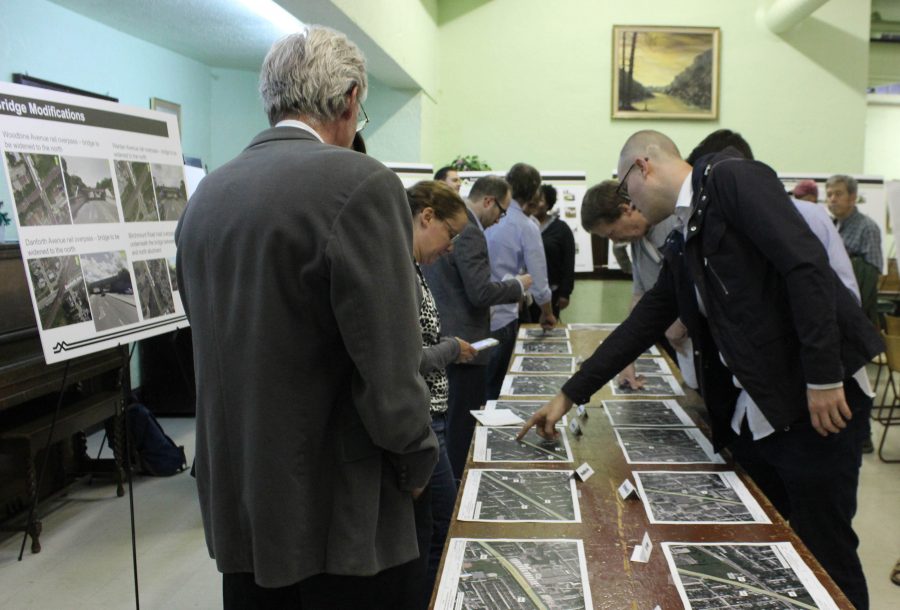 East End residents along the rail corridor continue to raise concerns about how Metrolinx’s planned service expansion, and the noise increases that would accompany them, would impact their quality of life.

Nathalie Roberge, who attended a June 15 public consultation about the plans, has a backyard backing onto the tracks. She says that while the noise is loud now, it is livable due to the lack of frequency of the trains. Planned upgrades to service mean that train frequency would increase and could mean a train passing by every 3.75 minutes.

“The bottom line is we know we bought properties that had train tracks, [but] we didn’t realize this was going to be a highway for train transport,” said Roberge at her house late last month, as a train went by, pausing the conversation. “So imagine that, every three-and-a-half minutes? That’s not fair. That’s not a viable option.”

Roberge said that she and many of her neighbors are worried about the hit that the service increases would take on their property values, especially as there are no noise or security fences installed in her area on the south side of the tracks.

“On the other side they’ve got a noise fence,” said Roberge. “I’ve got nothing. My backyard is exposed.”

Metrolinx said at the June 15 meeting that they would be installing a security fence during the expansion period.

Roberge lives a few doors down from an elementary school, École Élémentaire Catholique Georges-Étienne-Cartier, which she said she is even more concerned about in terms of the noise level.

“It breaks my heart to know and to think that little kids will be playing on the playground and this is their time to relax, have fun with their friends, and they will be constantly bothered by this noise that will go every, possibly every three, four minutes,” said Roberge. “It’s not the best solution, and the last time we heard, there’s no plans to put a noise barrier there either.”

In a letter addressed to the chair of Metrolinx, director of education André Blais, and Melinda Chartrand, chair of the board for the Conseil Scolaire Catholique MonAvenir, said that while the GO-RER expansion was a necessary project, “there is no doubt that these school communities will be impacted by the high level of rail traffic. Therefore, the Csc MonAvenir requests that Metrolinx take into consideration the health and well-being of our children and staff by addressing the issues of noise and vibration due to the railroad operations proximity to these schools and daycares.”

The letter requested the installation of a higher wall and the reduction of train vibrations by “implementing innovative solutions.”

The letter referred to both Georges-Étienne-Cartier and another elementary school in their board near the tracks, École Élémentaire Catholique du Bon-Berger.

According to the letter, there are 110 students at Bon-Berger, as well as 15 toddlers and 40 preschoolers in their on-site daycare program, and 475 students at Georges-Étienne-Cartier.

“[Metrolinx’s] plans do call for another noise barrier wall in certain areas, but not in others… so our immediate concern is that there’s a big gap in the plan for the wall,” said Bosworth. At the current noise level when a train goes by, explained Bosworth, he and his neighbours often have to pause conversations as they cannot be heard over the sound.

Bosworth said that after hearing the concerns of many residents, Potts stated his commitment to support the group’s efforts to “persuade Metrolinx to go beyond the minimum noise and vibration abatement requirements called for within the provincial protocol.” Potts confirmed this commitment Monday to Beach Metro News.

Vanessa Barrasa, a spokesperson for Metrolinx, said in an emailed statement, that the draft GO Transit/Ministry of the Environment and Climate Change Noise Protocol evaluates cumulative noise impacts, not the frequency of the event. Schools, daycare facilities and residential properties are all considered to be “sensitive receptors”, all of which were assessed as part of the study. She said, however, that noise mitigations are only considered if there is an increase of 5 dBA or more at these receptors.

“Noise related to existing and future GO service is a concern that we have heard across the region. That’s why Metrolinx is going beyond the requirements in the protocol to identify operational changes that can reasonably be made to reduce noise in the communities in which we work and serve,” said the statement. “We will address all concerns raised to ensure that we deliver a reasonable and balanced response. Any community member who has a concern about our GO service expansion in this area is encouraged to contact us at DonRiverScarborough@metrolinx.com or 416-202-4921.”

meh, I don’t think kids will be bothered by any of this…. that’s just a cheap argument that no one should fall for lady.