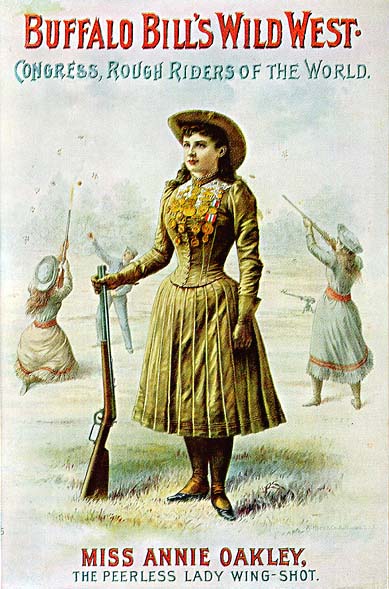 Beachers love a parade. What a parade it was on August 22, 1885 when Buffalo Bill’s Wild West show wound its way from the city out to the Woodbine racetrack near the marshes of Ashbridge’s Bay. According to the Toronto Globe, “vast crowds lined the streets” and a great audience attended the three days of outdoor performances (no Sundays, of course).

Cody was one of the most famous men in the world. His extravagant pageants travelled to Europe and performed for kings and queens. Audiences believed that these mythical re-enactments portrayed the west as it actually was. The Globe praised ”the striking realism of this show as a picture of Western frontier life.”

Buffalo Bill had Canadian roots. When his Wild West show returned to Toronto in 1897, he told the Globe, “Do you know I think I can call myself a Canadian. My parents were Canadian and relatives are yet living in the neighbourhood of Woodstock. My grandfather was at one time a resident of Toronto.”

Philip Cody was one of the early settlers in “Toronto Township” (now part of Mississauga) and ran an inn until 1829. His son, Isaac, moved to the American West where William was born in 1846. Isaac and Mary Cody came back to Upper Canada for a time and little William was baptized in the Dixie Union Chapel built on land donated by the Cody family.

Sitting Bull was the leader of the Sioux who had defeated the U.S. Army in the Battle of the Little Bighorn in 1876 (Custer’s Last Stand). He led his people to safety in Canada where they stayed for five years until returning south. The buffalo herds that the Sioux depended upon for their way of life were gone, killed off by hunters like Cody. The great chief was reduced to playing himself in a travelling show.

Long before “Wonder Woman” there was Annie Oakley, nicknamed “Little Sure Shot” by Sitting Bull. She was only five feet tall, but a champion sharpshooter. Her life story has been celebrated on TV, in the movies, and on Broadway. The film version of Annie Get Your Gun (1950) won an Oscar for music, including “There’s No Business like Show Business”.

Sitting Bull joined Buffalo Bill’s Wild West tour in 1885. The Beach area by the lake was still a resort community of small cottages, hotels, parks and the Woodbine Racing and Driving Club which opened in 1875. City people came out to escape the summer heat and enjoy the cool waters and sporting events.

Commercial fisherman George Lang lived in one of the first cottages on Woodbine Beach.

In her book, Along the Shore: Rediscovering Toronto’s Waterfront Heritage (2013), M. Jane Fairburn writes, “Legend has it that George Lang took Annie Oakley and Buffalo Bill out in his boat, where Annie shot snipe with a rifle. Later, she is said to have taken tea with Mrs. Lang on the sandbar directly to the south of the park.”

(Snipe is a type of water bird that is difficult to hit in the air, hence the word “sniper”.)

The year 1885 was one of turmoil in Canada with the North-West Rebellion led by Louis Riel. On July 31 the Metis leader was found guilty of treason and sentenced to be hanged. When the Montreal Herald asked Buffalo Bill what he thought of the “present trouble with our Indians”, he replied, “I don’t understand it. Are the white men trying to take their lands away from them?”

Cody told a Globe reporter that “in nine cases out of 10 when there is trouble between white men and Indians, it will be found that the white man is responsible for the dispute through breaking faith with them…the white men were responsible for the Sitting Bull war, which was really caused by miners invading the Sioux reservation in search of gold”.

Cody also stated, “Every Indian outbreak that I have ever known has resulted from broken promises and broken treaties from the government.”

However, his show perpetuated the old myths of heroes and villains with painted “warriors” attacking a stagecoach and a settler’s cabin before Buffalo Bill saves the day. Sitting Bull may have wondered why there was never a scene of soldiers attacking his villages, killing his women and children.

When I was growing up back in the 1950’s and 1960’s the Western genre was very popular in movies and on television. As kids we played “cowboys and Indians” like our heroes. In Hollywood the John Waynes always won a great victory.  When settlers or soldiers died, it was called a “massacre”.

It is no wonder that over the years many Americans have accepted the Hollywood misconceptions and stereotypes about Canada. Western movies completely distorted the history of our West. The tagline for the 1954 movie Saskatchewan (set in 1877) read, “where the Royal Northwest Mounted Police stood alone against the fury of the Custer-massacring Sioux and the savage Cree nation”.

In fact, the Mounties did not fight any battles with the Sioux. Sitting Bull said, “The grass in Canada is not stained with blood”. His people lived in peace in Canada and he was friends with the Mountie superintendent James Walsh.

I hope no American tourists came to the prairies expecting to see the majestic Rocky Mountains featured in Saskatchewan…or brought their skis in July.

Buffalo Bill’s Wild West show influenced many later portrayals of frontier life. Whether we realize it or not, we are all affected by popular culture, by childhood TV memories of settlers “circling the wagons” with arrows flying. Who were the invaders? Whose land was it?

June is National Aboriginal History Month. As we celebrate our 150th birthday, Canadians should remember that we all live on Indigenous land.

Hi,
My Great Grand father on my mother’s side was George Laing