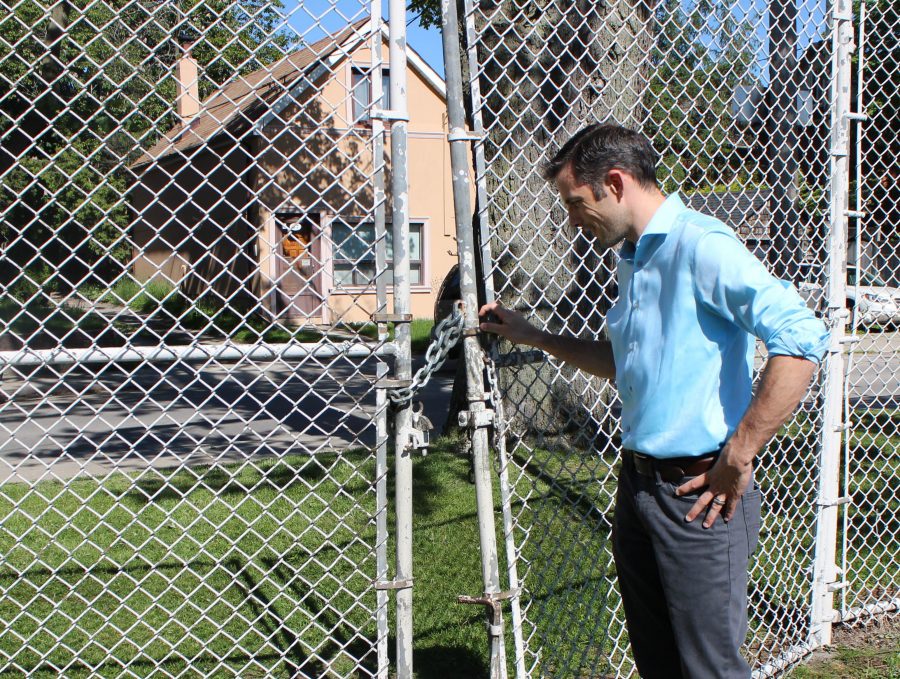 Local resident Andrew MacPherson standing next to an area of the fence that, when the main gate is locked, younger children often squeeze in from while their parents sometimes scale the fence or wait outside while their children play. PHOTO: Sophie Sutcliffe

Several parents of younger children are upset after finding the fence around Malvern Collegiate Institute’s yard and track locked on several weekends and holidays over the past year.

“I wasn’t sure why it was locked up,” said Andrew MacPherson, a father of a two-year-old and a four-year-old that lives in the area. “It seems odd, you don’t know when it’s going to be locked and when it’s not so you sort of have to walk over and test it.”

Sheila Cary-Meagher, TDSB trustee for Beaches-East York, said that while it is not normal policy to keep school fields locked, it has been done in Malvern’s case mainly due to overuse issues.

“Lately, in order to preserve grass on certain fields, we had to lock them up,” said Cary-Meagher. “It’s not something I like to do, and as far as I’m aware it’s the only one in the ward that’s locked. But they have a very small field for the size of the school. So it gets pretty intensely used by the students.”

Cary-Meagher said that high enrollment is also part of the reason Malvern’s field is closed while others are open. She cited that Adam Beck, a public elementary school nearby, has a much larger field and an enrollment of only 500 students, while Malvern’s enrollment is over 1000 students.

“I understand that that might be the line that they’re towing, but that’s one of many reasons [for not opening it to the public] that they’ve used in the past,” said Jamie Little, a father of two five-year-olds who lives nearby. “The whole grass thing boggles my mind cause they have football practice on it…. When the gate is open after those the place is a disaster.”

According to TDSB spokesperson Ryan Bird, the football, field hockey, lacrosse and soccer teams all use the field with cleats on.

Little said that he didn’t see how leaving the gate open to the public could be so harmful to the grass, as “it’s basically kids going round the track on their bikes… There’s not a volume of people using the grass. It is not getting torn up in any way.”

Like MacPherson, Little was frustrated by the inconsistency surrounding whether the gate would be open or closed.

“The school’s saying that it’s a private space but then [we’re] given access to it? It just depends on who the caretaker is, what mood he’s in that day. There’s no consistency to it at all,” said Little.

Cary-Meagher said in response that “it shouldn’t be inconsistent” and that it is probably left unlocked only by accident. She also said that while she understood the frustration of those living in the area, the field had to be closed to the public to avoid a situation where the field has to have grass replaced and closed to the students as well, which is what happened at Williamson Road PS.

“School yards are primarily for school use but in a big city like this, they also double as parks. So when you pull one out of the local use, it’s annoying, [and] I don’t fault anybody for being annoyed by it,” said Cary-Meagher. “But if it is unhealthy or damaging [to the field] to have it used, and that’s why it’s closed off, [then] I have to support that.”

In a recent development however, Bird said in an email to Beach Metro News that “while the field conditions do need to be addressed, at this point in time, the field will remain open [over the summer].”

I complained about this many times over the years. As one of the only green spaces in the area it is important to keep it open. Kids do get under the fence, and I saw an incident where a dog got in as well and the kid was chased. The kids can get in but not out. Not a safe situation at all. With all the damage done by football to the grass, certainly a few kids playing soccer or baseball or residents (taxpayers), utilizing the track would be minimal in comparison.

By that logic – all roads should be closed to avoid mis-use by speeders, etc.

Natural tuff is a perpetual problem. Why not astro turf it.?

If the growth of the turf was really the issue, then the TDSB could at least take some measures like (1) re-seeding, (2) re-sodding, (3) aerating, (4) watering (though not this season),… none of which have been even attempted this spring, nor last year for all I can recall. The state of the turf is but a distraction. The state of the entire Malvern grounds is poor. Chipping asphalt in the basketball area, no garbage cans other than the dumpster and one behind the locked yard, broken glass, no replacement sword on the memorial statue, ….