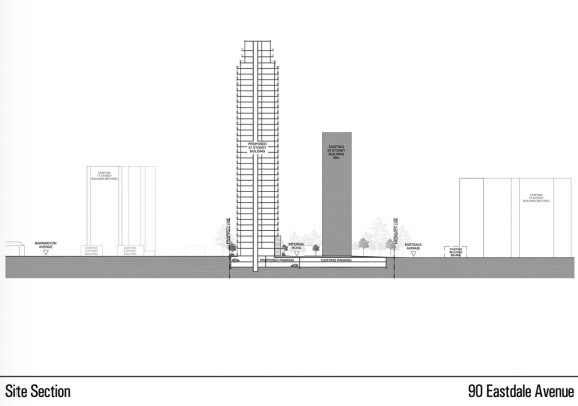 A rendering of the proposed site at 90 Eastdale. PHOTO: City of Toronto

After almost a decade, a Crescent Town development proposal is headed to the Ontario Municipal Board (OMB) again after the city and the developer were unable to come to an agreement about the size and structure of the residential tower.

The developer, Preston Group, argues the 37-storey, 396 rental unit building at Secord and Eastdale is needed, and will be an improvement to the neighbourhood.

City staff and the area’s city councillor disagree, and are actively opposing the plan, saying the residential tower proposed is “too high” and will put additional strain on an area that is already feeling the pressure when it comes to available resources. Staff are recommending that city council approve their recommendation to fight the application at the OMB.

“Once again it’s a disappointment that Preston Group has decided that it wants to build an inappropriate oversized building and appeal to the OMB to try and achieve it,” said ward 31 councillor Janet Davis. “There’s insufficient separation distance between it and adjacent properties. The shadows will have significant impact on both the adjacent buildings and local residential neighbourhoods.”

Brian Levy, CFO of Preston Group, acknowledged the building will put some strain on the surrounding community, but argued that adding the investment and the housing infrastructure will “help the overall area” and add rental stock for “people who can’t afford other alternatives like housing that require down payment and ownership.”

A new development might also create “some other pressures from the city’s standpoint to invest in more resources in the area,” he said.

Debate over the site, which is currently home to a residential tower and townhomes, also developed by Preston Group, began nearly a decade ago.

According to city documents, the proposed development would have been 3.39 times the size of density permitted for the lot. Following a review of the plan, it was decided that an Official Plan Amendment would be necessary because of the expansive size of the lot needed for the project and the fact that the area in question is designated as both an “Apartment Neighbourhood” – a neighbourhood considered to be physically stable and where significant growth is not anticipated to take place – as well as a priority neighbourhood, which means any revitalization strategy proposed to the city must take into consideration a number of factors including improved local parks, public spaces, and community services, identifying opportunities for improved housing of the existing stock, identifying priorities for capital and operational funding to support the strategy, and identifying potential partnerships to stimulate the investment in the neighbourhood and support the revitalization strategy.

After another round of submissions in 2010 and again in 2012, a city report stated that “considerable effort by the ward councillor, city staff, the community and the applicant resulted in an OMB settlement in 2012 that allowed for a reasonable level of intensification with appropriate community benefits.”

However, despite reaching an agreement, the settlement was ultimately abandoned by the owner and was replaced by what was described by city staff as a new, significantly more “intense” proposal.

“What they’re proposing to do in the current version is to build a new building in the area behind the existing apartment building,” explained Leontine Major, senior planner with the City of Toronto.

Councillor Davis said the difference between this proposal and the one from 2012 is where the tower sits on the property.

“One of the key policies we have in our guidelines is the separation – buildings should frame the streets and have a relationship to the street. They should front onto the street. This is going to be a tower behind a tower with inadequate separation distances,” she said, calling the new proposal “disappointing.”

A May 1 community consultation on the most recent proposal saw approximately 50 people in attendance.

Questions relating to the intensity of the development, parking and traffic, lack of space for new students in schools, noise-related concerns, lack of TTC bus service to the area, and the availability of space for a development of this size were among the issues voiced during the meeting, said Davis.

Speaking to community concerns, Levy maintained that Preston Group has done the necessary studies and “feel it’s an appropriately sized intensification for this site. It’s quite a large site and we feel adding the investment and the infrastructure will definitely help the overall area. It’s a great area and we feel very strongly about it.”

The proposal will now go to city council on July 4th where Davis said “council is being asked to approve directions from staff to go and fight this application at the OMB.”

She noted that the decision is no longer under the jurisdiction of the city and “the future of this building and what comes out of it is now in the hands of a provincially appointed third party, not the city.”

A date has not yet been set for a hearing at the OMB, which the province has stated it will be reforming and replacing with a newly appointed Local Planning Appeal Tribunal before Christmas.

Build more rentals!! rent is too high in this city

This neighbourhood is already too densely populated. What about schools, traffic? There must be other areas of the city that are less populated that you can build your building.