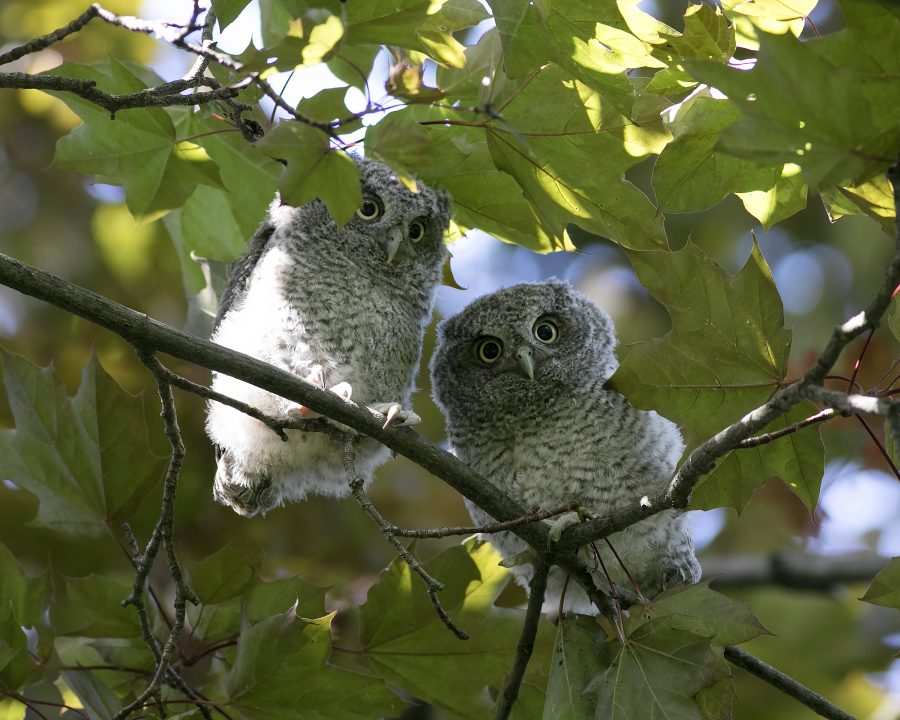 The owlets, after they had fledged, in the author's backyard June 7, 2017. PHOTOS: Ann Brokelman

Many birthdays ago, I received a very thoughtful gift from my husband: a screech owl nest box. While I loved the idea, I knew the odds of an owl successfully nesting in the box were slim.

The first year of our adventure turned out mostly how I expected. After putting up the box in an ideal spot for owls… a family of squirrels took it over. Over the next year or so, I tweaked the location, added an anti-squirrel baffle, and waited and watched as house sparrows and great crested flycatchers made themselves comfortable in the squirrel-proof box.

Then, one random winter day, I looked out the window and something caught my eye. “Erle! We have an owl!” I yelled to my husband as I just about fell out of my chair. Erle came running and we stood at the window and watched a little grey Eastern Screech Owl in the nest box.

He moved in, but boy, did he ever move slow on the “nesting”. While this young bachelor seemed to love his new Scarborough apartment, it took him three years to finally convince a lady to come back to his place.

This year it started to happen again: the owls moved in, and the starlings showed up to kick them out. But this year, the owls were prepared to fight.

After a short avian episode of “Game of Thrones”, the owls won the nest.

And, to our utter amazement, it was only a few weeks before we stopped seeing the female leave the nest and started seeing the male bringing food to her in the box. This behaviour could only mean one thing: eggs.

After 28 long days, my patience was rewarded: a tiny puff of an owlet looking out the hole in the box purchased seven years earlier. Half an hour later, a second owlet joined his sibling in looking out at the world outside the nest.

At this point I went into full parent mode: I moved into our tiny garden shed, and set up my camera on a tripod. Every evening at about 8:30 I would sit in the shed and take pictures and videos of the male and female raising their young and constantly bringing worms, slugs, snakes, birds, and even moths. The parents would perch by the nest’s opening and hold out the food. The owlets could gulp down whatever the parents had and then watch as the parent would fly away.

Taking photos was actually an incredible challenge, as I refused to do anything that might jeopardize the perceived safety of the owl box. This meant no flash, no lights, and no leaving the shed for a closer shot. While a few friends joined me and laughed and griped about the ridiculousness of sitting in the shed, once the magic hour arrived, any and all complaints disappeared quickly.

But, of course, all good things come to an end. On June 7th, I was sitting outside with Erle wondering what we would see with the owls today. We checked the trees at the back of the property to see if the female owl was in her favourite roost. While there was no sign of her, Erle could see the male. It turns out it wasn’t the male, but one of the owlets that had fledged overnight. My friend Dianne came over and discovered that the second baby had fledged and was perched near the mom.

Funny enough, the male and female moved out a few days ago and a pair of house sparrows have already moved into the box and have built their own nest. I don’t know if I’ll ever see the owlets again, but I hope the pair will remember this nest as a successful one and return next year to try again. What I know for sure is that these past few weeks were worth the seven-year wait. A clear highlight of my wildlife adventures, I enjoyed every single moment.

An awesome story of wildlife in our backyards. If we provide homes for wildlife we reap the benefits. Amazing photos and video!

Thank you so much Chris. It was a memory and experience of a lifetime.

To have Mother Nature in your back yard , truly amazing to see day to day revolving from little to leaving the nest what a treat , thanks so much for sharing , love init …ed

Thank you for all your support Ed

What an amazing adventure. Your description is superb. I felt like I was there right beside you watching and waiting. Thank you so much for sharing your adventure.

Ann, amazing video. Kudos to you for your determination not to intrude on the owls, even at the expense of your own comfort. Hope you have a repeat next spring, from their perspective you’ve created a safe place to raise a family.

Ann, what an incredible opportunity! Your patience and wonderful wildlife stewardship skills have rewarded you (and us!) once again!! Thanks so much for sharing this. I’ve been an owl fan ever since reading Farley Mowat books at age 12! I can’t imagine having them in my yard! We do back into a forest though….

Thank you Patti. It was a wonderful opportunity to watch and leave.

This is a captivating story with beautiful photos and video. Thank you for putting up the nest box, waiting patiently and then documenting this very special event that took place in your own backyard. I hope that someday I too will get to experience the joy of having Eastern Screech owls nesting in my backyard here in eastern Pennsylvania. I will patiently wait and hope for a once in a lifetime experience.

Pam thank you so much. It has been a great adventure