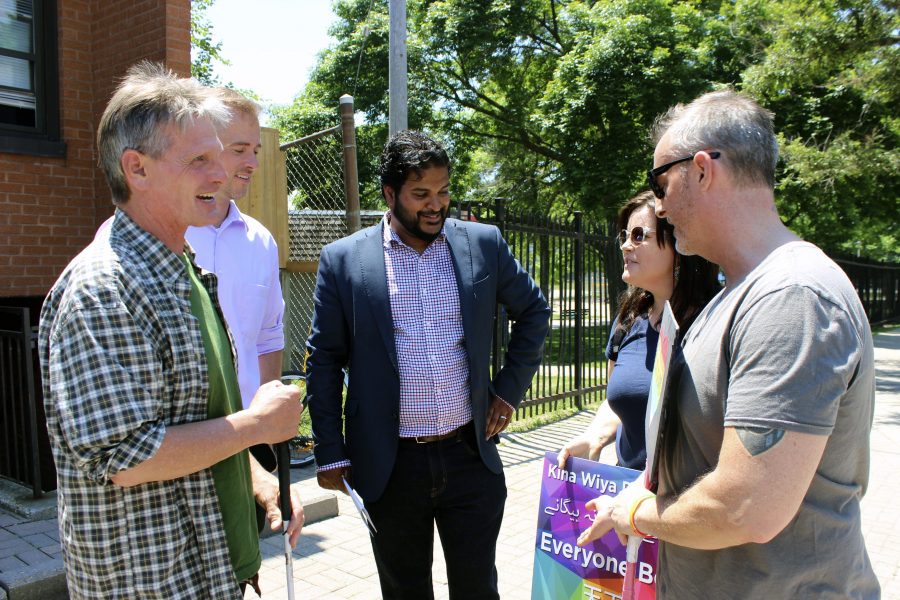 Dean Will stands with supporters at a rally near his home June 16, 2017. PHOTO: Sophie Sutcliffe

A small but passionate group gathered on a recent Friday afternoon for a rally in support of East Ender Dean Will, a gay man who has been a repeated victim of homophobic bullying.

Will, who is legally blind, says that he was recently assaulted near his Stephenson Park home. He also had his pride flags stolen in a repeat of hate-fuelled vandalism he experienced last year.

About a dozen supporters turned out for the June 16 rally, including neighbours, members of the Toronto Police Service and Beaches-East York MPP Arthur Potts.

“I haven’t heard of anything like that [happening in our neighbourhood before],” said Dianne Eibner, a local resident. “I was kind of shocked about it and concerned at the same time. And I was able to come out so I did.”

Michael Rusek, who runs the Danforth and Woodbine Facebook group and organized both this year’s and last year’s rally, presented Will with a replacement for the flag that was stolen.

Will was visibly moved at the response from the community.

“You’ve been extraordinarily kind to me, all of you. And that just goes to my heart. Thank you very, very much,” said Will.

Phil Pothen, an area resident and lawyer, was retained by Will on a pro-bono basis prior to the rally to provide him with legal advice and act as an intermediary, as Will was not sure what to expect at the gathering given all of the media attention.

“Will wants to make it as much as possible about the broader social context.”

Will lives in Toronto Community Housing Corporation (TCHC), and alleges that the harassment is the result of another tenant. He said he believes his landlords should have done more to de-escalate the situation before a rally was necessary.

“[Will] wants to make it as much as possible about the broader social context, about, why is it that the TCHC doesn’t have the wherewithal to address these concerns in a timely fashion, why the TCHC doesn’t have the money, when someone asks, just to provide a camera. It shouldn’t really be up to the community to provide donations. That’s a sign of social failure,” said Pothen.

Brayden Akers, a senior communications advisor at the TCHC, told Beach Metro News that staff are looking to increase the number of cameras in the community, and that they’re following up on “every single request he has made”.

Will said that while he is happy that they have responded at this point, the problem is the level of communication over the last nine months. Will also said he was skeptical of TCHC’s claim that staff are looking to increase the number of cameras.

“Words are cheap unless they actually do it, you know,” said Will.

While Will has been offered a spot at another TCHC location, he said that this wasn’t a viable option for him, as he has lived in the Main and Danforth community for a number of years.

He also said that he and Pothen will be meeting with the TCHC’s anti-discrimination unit next week.

“Dean is a very compelling, beloved character in this neighbourhood. But most people in his situation… don’t have anywhere near the social capital that Dean has. And so how do you take advantage of this situation to try and fix the problem proactively so that it doesn’t take a rally to even get a semi-adequate piece of attention to this,” said Pothen. “The job of the TCHC is to find a solution that keeps him safe.”

Akers has said that if a resident is charged with a crime against another resident, they “immediately begin eviction proceedings.”

The timeline for those proceedings varies. Of the 260 evictions pursued for crime-related incidents between January 2015 to May 2017, TCHC said 61 have resulted in evictions, 68 in mediated agreements, and 28 conditional orders. Another 71 remain in the hearing process.