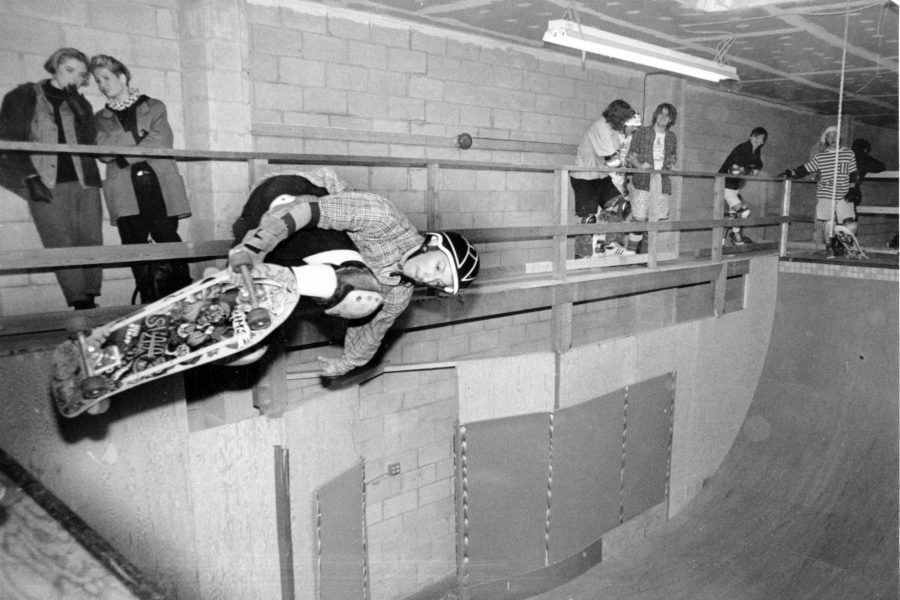 Skateboarding pioneers have long carved out space for their sport in the East End. A January 26, 1988 front page Beach Metro News story details the entrepreneurial efforts of 19-year-old Perry Gladstone, founder of Toronto Skateworks on Danforth.

Located at 2168 Danforth Ave., the facility was the first commercial indoor skate park east of the Rocky Mountains.

“There’s thousands of skateboarders out there with nowhere to go,” said Gladstone at the time. His club opened Jan. 11, 1988 with 40 members, some from as far away as Niagara Falls, and promised to offer kids “a whole new sport – ‘vertical’ skateboarding on two wooden ramps” with space for about 35 skateboarders at a time.

Membership fees were $25 and parental consent was required. Helmets were also required and for rent at $2 a day.

At the time, the only outdoor skateboard area in the East End was at Duke of Connaught Public School, according to the article. There was a hill at Adam Beck, but it was removed following complaints from residents.

Gladstone invested $12,000 in the business, noting facilities like Toronto Skateworks “give kids a chance to experiment. It opens up a whole new world of skateboarding.”

At the time, there was also a push for more public skateboarding facilities, with then-councillor Tom Jakobek telling Ward 9 News that a temporary skateboard area would be built at Greenwood Park.

“I’d rather see kids off the road,” he said. “If we can build basketball courts and skating rinks, why can’t we build skateboard parks?”

Reached online last month, Gladstone said Toronto Skateworks lasted for a couple of years before getting tied down with permitting and bureaucracy. He went on to help open another skate park in Peterborough.