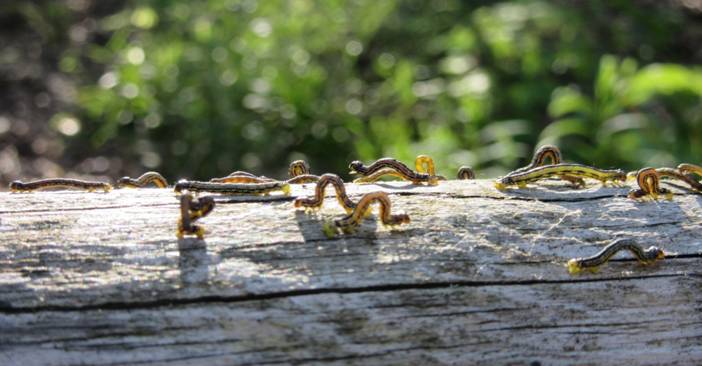 They’re small, they’re slimy, and they have a voracious appetite for leafy greens.

These creatures are cankerworms — an insect also commonly known as an inchworm, and which many would recognize as a common moth later in its lifecycle — and though they may be small, they pose a mighty threat to the foliage in the city, and in the East End they have already taken over large portions of the Glen Stewart and Glen Davis ravines.

“Last year the same cankerworm was present but the damage was a fraction of this year’s.  Every year that this type of devastation recurs, means a greater risk to the oak trees and their ability to survive.  This ravine and the oaks along our streets are a major way we define our neighbourhood — other than the beach of course.  We are trying to do everything we can as volunteers to raise awareness and to help the city in combating this very dangerous pest,” said Cherie Daily, a member of the Friends of the Glen Stewart Ravine group.

According to Ralph Toninger of the Toronto Region Conservation Authority (TRCA), serious infestations such as the one occurring right now are not unusual and tend to take place once every 7 – 10 years.

“They’ll increase in abundance and then generally will get to a really high level and then crash,” explained Toninger. “They’ll eat so many leaves that after a year like this they’ll experience a population crash… and the predators catch up and it’ll be a good year for fledgling songbirds because they’ll feast on the [cankerworms].”

The last outbreak occurred 17 years ago in 2000, but Monique Schuette, a volunteer of Friends of Glen Stewart Ravine group who took particular interest in cankerworms after watching them take over the ravine at the beginning of June, said that while the city is aware of the issue, “the actual numbers and devastation are beyond what was anticipated. They are still eating and have now spread beyond the ravine.”

Schuette explained that the worms hatched about two weeks ago when the trees had finally bloomed and had created “a cool, shady oasis.” But within only four days, the cankerworms had demolished all of the foliage in the centre of the ravine, she said.

According to the City of Toronto, part of the risk associated with cankerworms is the fact that they spread easily because larvae tend to suspend themselves on silk threads and webbing, which are then carried to different parts of the forest by wind. Once they attach to new trees, they continue feeding and defoliating the affected host.

Feeding typically lasts about four weeks and while healthy trees may be able to recover, the infestation could signal the complete demise of older trees that were unable to handle the stress of the situation. This is especially true when the infestation recurs two or more times.

“Leaf re-generation on surviving trees will start in July, so the ravine will begin recovery then.  Unfortunately, oaks have difficulty with leaf regeneration and many may not survive, especially if the fall cankerworms don’t decrease in numbers next year,” said Schuette.

In an effort to save as many trees as possible, Schuette and Friends of the Glen Stewart Ravine group are recruiting volunteers to help install bands around the stems of host trees in the fall.

This is one of the ways to deter cankerworm populations from recurring the next year. According to the city, a sticky band is applied to the base of the trunk which works to trap the female moths — which do not have wings — and prevents them from climbing up the host tree in order to lay eggs. Quilt batt, cotton batt or foam roll, plastic wrap, and sticky material are among the materials necessary to create the sticky bands. Full details can be found at bit.ly/fallcankerwormTO

Toninger also said if the cankerworms are found in backyards, “people can spray and remove them from the trees by cutting off the offending branches…if it’s early enough in the year where they’re still bunched up in nests you can remove that limb and dispose of the young.” He admitted however, that once they are free-moving worms, it is much more difficult to get rid of them.

Those who would like to volunteer with Friends of the Glen Stewart ravine are asked to contact Monique Schuette at friendsofglenstewartravine@gmail.com

It looks like the Fall Cankerworms have finally moved underground (or have been eaten). It’s actually the City of Toronto, Parks, Forestry & Recreation division that will be banding vulnerable trees in the Autumn – mainly oaks. Friends of Glen Stewart Ravine are coordinating volunteers to help them with this sizeable task. Contact us if you would like to help.