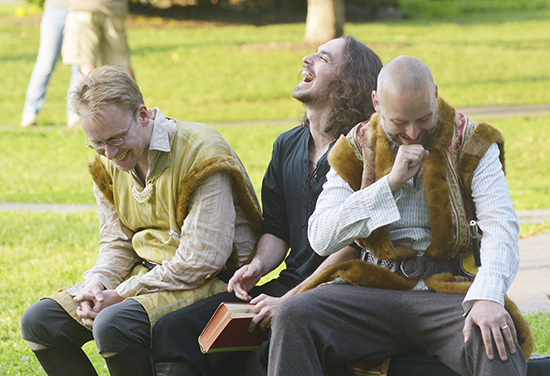 Actors share a laugh during the 2015 Bard in the Park production of Hamlet. The event returns this year with Romeo and Juliet. PHOTO: Beach Metro News file

A sure sign that summer is around the corner, Bard in the Park returns for its 13th season this June, this year presenting its take on Shakespeare’s Romeo and Juliet.

Directed by Adrien Beattie, the Community Centre 55 supported event features a cast that “is a mix of familiar faces and newcomers,” said Beattie. “Some of the cast have appeared in numerous Bard productions, others are veterans of other community theatres and some emerging professional actors.”

The play is familiar to many, and the theme is timely: Beatte said it boils down to “how division and hatred can obscure our highest ideals.”

The production holds two preview shows in Norwood Park on June 1 and 2 at 7 p.m. before moving to Kew Gardens for its nine-show run beginning Monday, June 12 at 7 p.m.  Learn more at www.bardinthepark.com