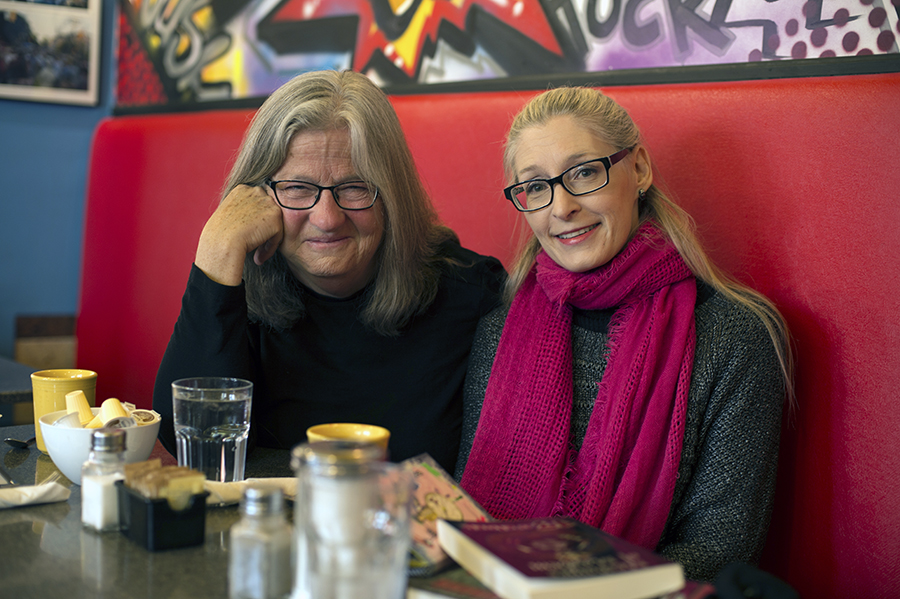 Beach writers Catherine Dunphy and Lisa de Nikolits chat about their love of mystery writing over coffee on Queen Street East, May 10, 2017. Learn more about their writing collective at www.mesdamesofmayhem.com. PHOTO: Anna Killen

Gone are the days when one had to hide her grocery store romance novel or thriller inside the cover of an Atwood to save intellectual face. Feminist and ferocious, today’s best-sellers are genre-bending, smart and compelling – not to mention part of a women-driven, written and led industry.

In Toronto, there are many ways for a writer or reader to connect with others with similar tastes. Book clubs, networks, and conventions abound, along with focused writing collectives like the Mesdames of Mayhem, a group of about a dozen mystery writers who are about to launch their third anthology, 13 Claws. Each anthology is based loosely on a theme, with this one extra sharp and including the winning entry from their first crime fiction contest.

Four of the Mesdames will be leading a talk at the Beaches Branch Library later this month. It is an opportunity for readers and writers to learn more about the genre and how a writing group can help anyone get closer to the dream of writing.

Former journalist and award-winning writer Catherine Dunphy, one of the four speaking at the library, says she would be happy to do away with the “mystery” genre and simply call mysteries best-sellers.

Yet, the mystery template has its appeal, particularly as a woman.

“By writing these stories, we really do get a chance at righting things in the world, to get the bad guy at the end … putting things in order, righting wrongs,” she says. “Underlying mysteries is this sense of outrage – you’re not going to get away with this. There’s a sense of women wanting to see things right.”

Fellow Beach author Lisa de Nikolits agrees, adding in many novels, including hers, “the women have a sense of self-realization at the end.”

The pair pushes back against the stereotype that the genre is “chick lit” or frivolous, and instead an intelligent way to unwind after a hard day’s work.

“Mysteries give you the greatest insight into the modern world,” adds Dunphy. “It’s a great social study. It’s not about the bodies, it’s about the living.”

Their passion for their craft is catching, and they hope to share what they’ve learned writing with the Mesdames with the Beach community in a forum that is entertaining, educational and responsive to their audience.

Join them, along with fellow writers Rosemary McCraken, M.H. Callway and Catherine Astolfo, May 30 at the Beaches Branch Library at 2 p.m.