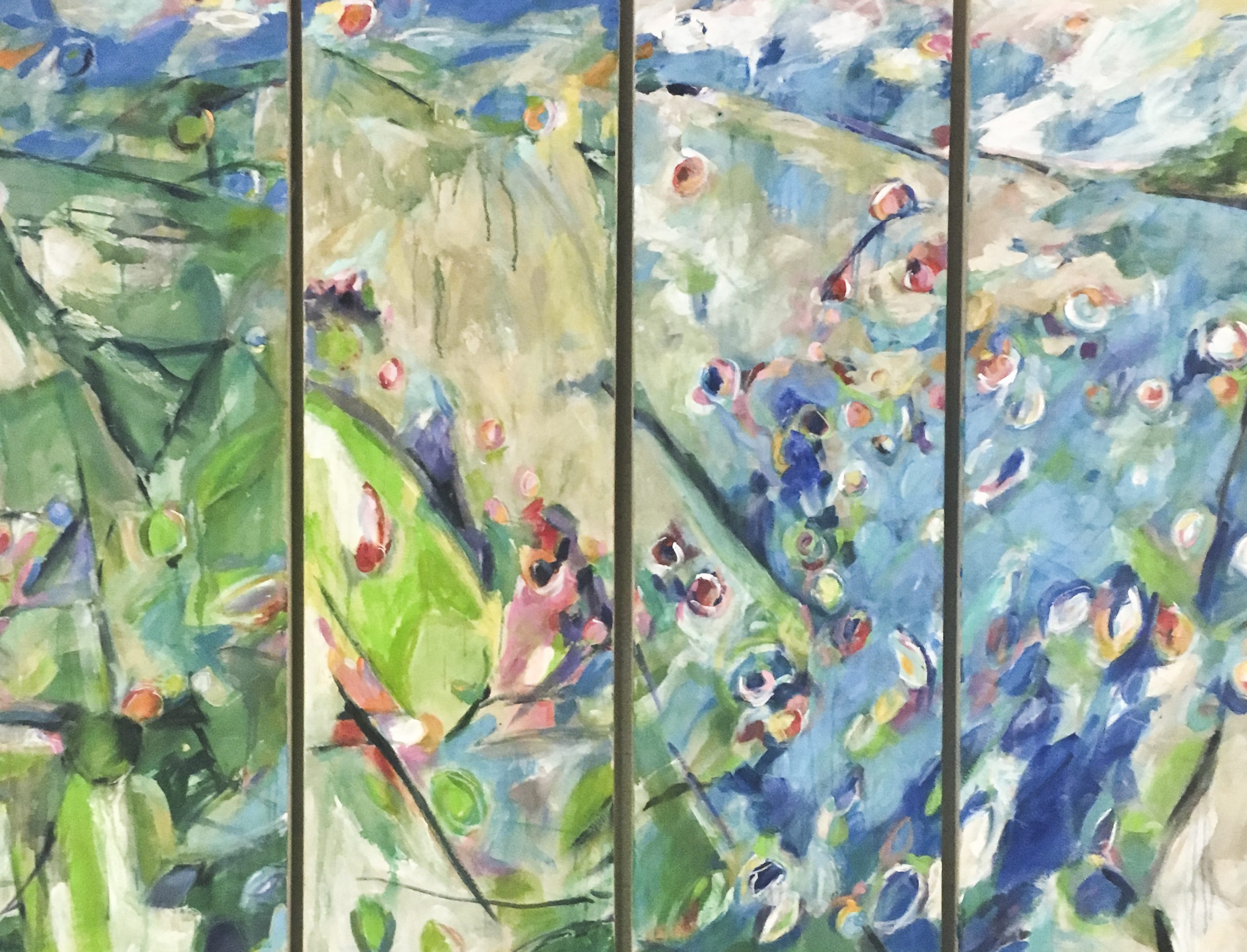 The art hanging on the walls of the Balmy Beach Club is not only a geographic tour of stunning Canadian vistas, it’s also a mini-course in Canadian art history.

Mayhew – whose work is now permanently on display at the club – said her appreciation of art developed early.

“I grew up in Ottawa in a very artistic family,” she said. “Very design-oriented and they did work for the embassy. [My parents] did estate evaluations so our house was continually moving with art and antiques and things like that.”

And perhaps being exposed to the work and process of Group of Seven artist Lawren Harris helped spark her interest as well.

“[My grandmother] happened to live beside Lawren Harris,” she said. “So as a little one, I’m playing in the backyard and I’m seeing this studio that was at the back of his house so I would go over.”

Mayhew said she had no idea who he was at the time, “but I really liked his work and I’d just sit on the stool and watch. I remember being kind of scolded that I shouldn’t be bothering the neighbour next door [because of who he was] but as a five-year-old, it meant nothing.”

Later, Mayhew decided to study art and attended Ottawa University where she earned a fine arts and history degree.

“We did a lot of plen air paintings – paintings created outdoors – so we’d go through the Gatineau and things like that. Ken Lochhead was the painter that I really followed and I did summer programs with him as well. He’s amazing,” she said.

But despite painting throughout her university career, her future would move in a slightly different direction. After finishing school, she landed a job as an art consultant for an interior designer in Toronto. While she spent some time in the city at first, it was a career that took her to both western and eastern Canada before she settled down in Orillia where she designed inns and resorts.

Ultimately, it was love that brought her back to Toronto and, more specifically, the Beach.

After having three children, Mayhew said she tried to get back into painting during their formative years but “found it hard to concentrate. So just recently I’ve been getting back into it and really focusing on that.”

Now, she uses her experience with interior design to help her creative process.

“Interior design is very process oriented,” she explained. “It can move but it’s quite linear. So I found that coming back now into the painting, my interior design practice has really influenced [it]. So my process is taking something and being able to see the shapes and the forms, the values, the texture and I can simplify them.”

As an outdoor enthusiast, Mayhew said she tries to paint natural landscapes as often as possible.

“I love the Canadian shield. I love the water. I’m a big swimmer,” she said. “I love that texture. But I also grew up spending my summers in Peachland, British Columbia. My grandma had a great big Victorian house. One of the oldest in central B.C., beautiful wraparound porches so we would be there with like 11 cousins. We’d all be there in the summer. And this view was there. The most spectacular view… So I’ve been painting that a lot.”

One of her most recent pieces however, is closer to home and can be seen hanging on the walls of the Balmy Beach Club.

Created to celebrate Canada’s 150, the painting entitled “Sesqui Beach” is made up of four panels and demonstrates Mayhew’s honed talent and abstract work.

If you don’t happen to belong to the Balmy Beach Club however, Mayhew will be participating in the upcoming Riverdale Artwalk taking place on June 3 and 4.

“I’ve been doing big, big abstracts, which is great,” she said of her work. “And then I’m going into the Riverdale art walk so that’s going to be a new one for me. I’m realizing that big paintings are hard to place. I love big paintings from a design eye of placing them but I realized I needed it to be a little more accessible so I’m doing smaller panels.”

Despite some fears about the reaction to her abstract art, Mayhew says the feedback has generally been positive.

As for whether or not we’ll see more of her work hanging at the Balmy Beach Club in the future, Mayhew said she’s not sure, but she certainly “hopes so.”