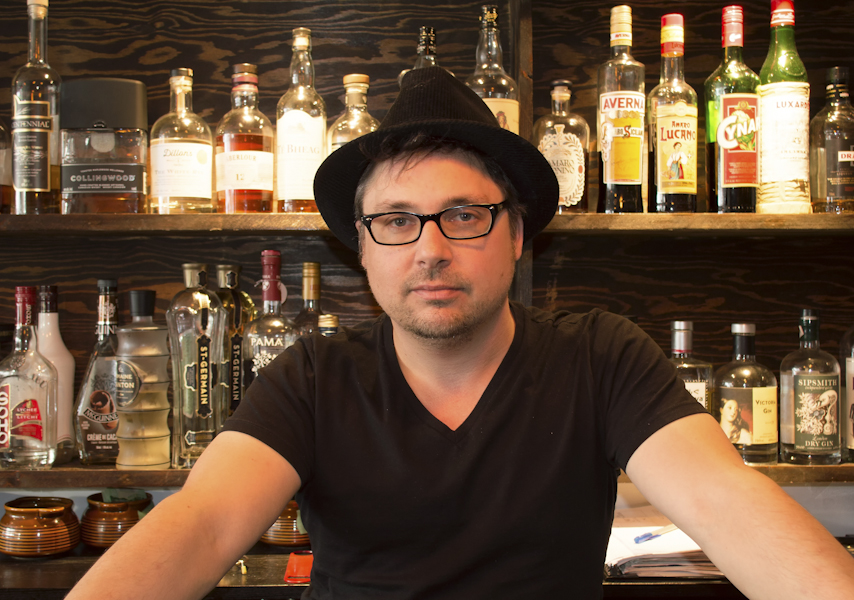 Robert Maxwell in his restaurant, The Beech Tree. PHOTO: Submitted

After spending months cooking up ideas, one self-professed “restaurant outsider” has decided to put all the ingredients together and bring those ideas to life – or, should we say, the screen.

Robert Maxwell, former owner of The Beech Tree on Kingston Road, said he has “always loved cooking. I became one of those kind of super foodie fans, bought cookbooks, obsessed about things, watched cooking videos incessantly.”

But it wasn’t until an unexpected career shift that he realized his dream of owning a restaurant could actually become a reality.

“There was a job transfer where I was working with an opportunity to either stay or get out and take a cut of this ridiculous federal pension I’d been building up,” he said. “So I took that money and I decided to take the plunge.”

A Beacher for more than a decade, Maxwell said he set his sights on finding a location close to home that would allow him to walk to and from the restaurant.

“I have kids so I wanted to be able to walk home. Restaurants can be all-consuming so I thought if I have a commute on top of that, I’ll never be home.”

Lucky for Maxwell, a friend of his purchased the building on Kingston Road that is now home to The Beech Tree. His original goal after opening three years ago was “to cook in the restaurant but not run it. So I hired a chef and we worked together to develop a menu.”

He laughed, recalling that there was a time when he – the owner of the restaurant – was also a subordinate of the Chef on staff but said “it was a great learning experience. I got a weird education here and I thought it was kind of unique because I wasn’t a lifer. It was sort of like a fish out of water story.”

Recently, Maxwell made the decision to leave The Beech Tree in the hands of his business partner, but said he was still drawn to cooking and entertaining.

“I actually almost lost my passion for cooking while I was working [at The Beech Tree],” he admitted. “It got so overwhelming, I got home and I didn’t want to cook. But I noticed when I cooked when I was entertaining at home, the men would watch what I was doing. Maybe it’s because they see all the cool chefs with the tattoos that look like rock stars. It’s easier to cook than play guitar, I don’t know,” he joked.

This observation left him with an idea though – one that would take the form of a digital, rather than physical concept.

“I’ve created a style of cooking, I think, that is a great mashup of restaurant secrets and sort of home cooking know-how,” he explained. “My theory I’ve developed over time is I buy cookbooks to look at the pictures. They’re pretty, they inspire me. But I don’t ever, ever follow a recipe. And people notice that and say how do you do that? When you learn to cook you don’t learn recipes, you learn techniques. You learn tools. You build a toolbox in your head of how to do things. You learn this stuff and you develop an instinct. And no cookbook is going to teach you that.”

Instead of creating a cookbook with his trade secrets, Maxwell decided his future was on screen – on YouTube to be exact.

“I love cooking shows. Let’s face it, Jamie Oliver… everybody wants to be that. But I noticed YouTube is a growing sort of curation of great instructional video and you know, that’s digital production, nimble and inexpensive,” he said.

Once he made the decision to move forward with his concept he contacted video production company, Motion and Still, who had created a promotional video for him in the past.

“So they shot a pilot, it was a party and they basically invited a bunch of cool young things over to their super swinging pad downtown and I cooked up some fried chicken, just kind of cool trendy food. I brought one of my chefs from the restaurant,” he said.

“And it was so natural, it was such an organic unfolding of things together.”

Since then, Maxwell and Motion and Still – who have now agreed to be partners in the initiative – have filmed eight episodes of his YouTube series, Thrice Cooked.

The show will feature a number of different episodes, some of which were filmed at The Beech Tree.

But Maxwell said they will also be featuring an at-home series that will incorporate his two daughters, and the team will be taking some field trips – one of which will include cooking for tree planters in Northern Ontario out of a converted school bus.

But when it comes to his hopes for the show, he’s keeping it simple. “I’m not looking to make it any bigger than something the Beachers can be proud of. I love shooting the videos. I just want people to watch them and enjoy them.”