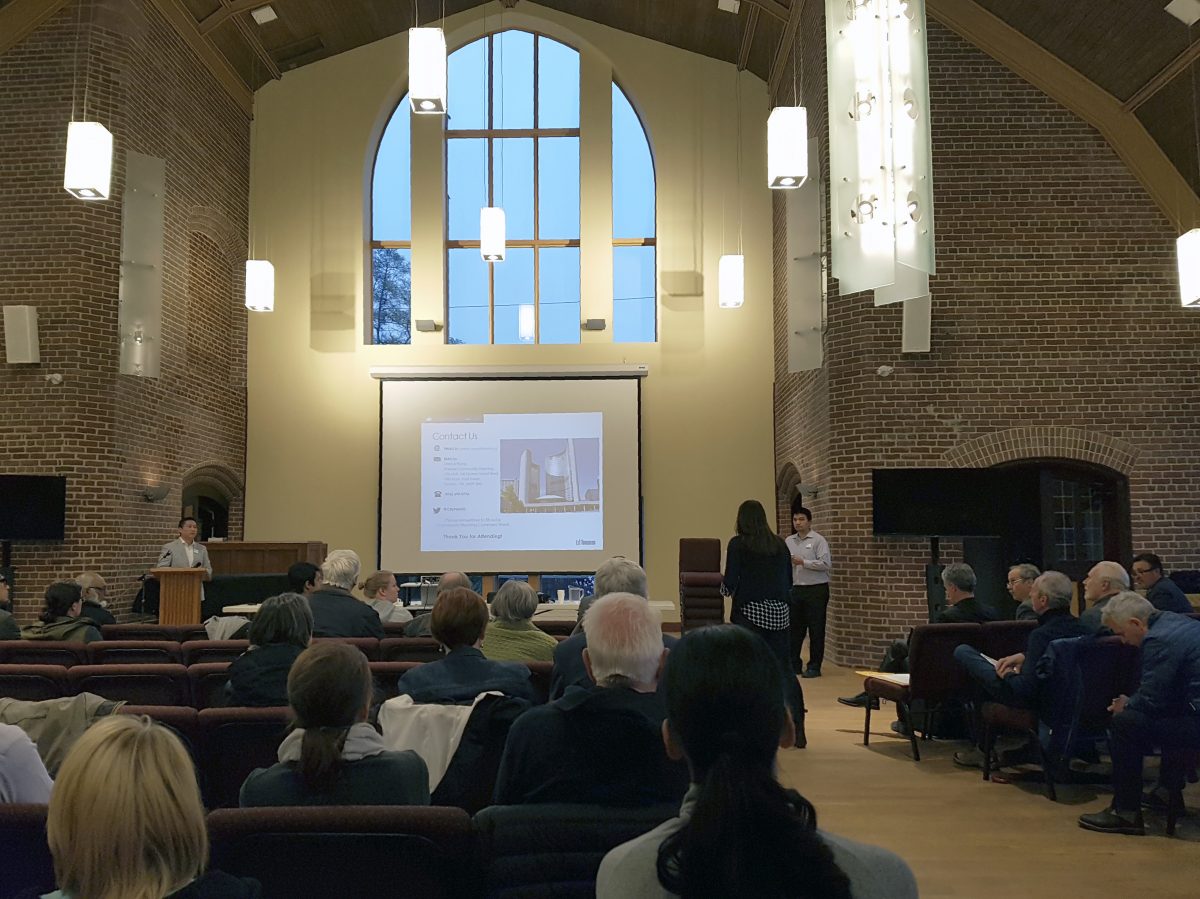 Residents hear from city officials about the proposed development at 507-511 Kingston Road at the community consultation May 4. PHOTO: Lara O'Keefe

Community members, city staff and representatives, developers and other interested parties met May 4 at the Beach United Church to discuss the nine-storey condo proposal for 507-511 Kingston Road.

The development, as proposed by Vista Nova Development and designed by architectsAlliance, would have two four-storey townhouse units facing south onto Wheeler Avenue as well as a nine-storey frontage onto Kingston Road.

Approximately 80 people attended the meeting, many from Wheeler Avenue voicing concerns about pedestrian and vehicular access on the cul-de-sac, as well as an increase in traffic surrounding the development and concerns about the building’s height.

Current zoning in the area calls for a maximum of 14 metres on Kingston Road and 10 metres with frontage onto Wheeler Avenue. As it stands, the development would require a zoning amendment which would permit a density of 4.29 times the lot area in addition to a 30.5 metre height amendment at minimum.

Community planner Derrick Wong told residents that “we are at the beginning of the planning process. If the applicant had come in with a proposal that conforms to the zoning, we wouldn’t have had to have this consultation.”

“It is still a proposal at this stage,” added Ward 32 Councillor Mary-Margaret McMahon. “There is still much to be done.”

Architect Robert Cadeau explained that the challenge in designing the building was creating “something that reflects the interesting geography that you see on the site,” referring to the steep transition from Kingston Road down to Wheeler Avenue, a single-family neighbourhood.

The current design terraces down the hill to face Wheeler – a design that didn’t sit well with some attendees, with one resident commenting, “we feel very safe having our children out there [on the street] because it’s a cul-de-sac right now. I’m wondering whether there has been consideration to the transition, and not trying to improve [the transition to Wheeler Avenue] but simply eliminating it, so it’s only a Kingston Road development.”

“We’ll take that into consideration,” responded Andrew Ferancik, a representative for Vista Nova.“I don’t think I’ve ever worked on any development where we’ve gotten it right the first time. It’s always a narrative.”

But despite reference to the project being an ongoing narrative, discontent continued to rise in the room as attendees voiced their fears about what many believe to be inevitable development that will change the face of the neighbourhood.

“You’re saturating our neighbourhood!” one man shouted, pointing to nearby developments along Kingston Road. “We don’t want this to look like the dog’s breakfast that is downtown Toronto.”

While the proposal is still in the early stages, and city staff have explicitly said that the building will not be built as proposed, McMahon tried to further allay fears by stating that “there will be a construction management plan, transportation plan.”

She did share some of the same sentiment as many in the room, admitting that she feels the building is “too tall, personally.”

Nevertheless, she said, “Something is going in. Let’s decide what it is going in, in our neighbourhood.”

McMahon is vety quick to defend the developer and brush adide the very legitimate concerns of her constituents.

I would run in the next election if I could answer this question: What would I do, (knowing that developers own property in the Beach and want to maximize development that the community doesn’t want), to get the results the community wants? What would I do different? In what new and innovative way could I fight the developers on behalf of the community? Will whatever replaces the OMB be more amenable to neighbourhoods and planning?

As soon as I have a practical answer with a winning strategy, I will run and win. Otherwise I would just be in the same position MMM and others are……………………….