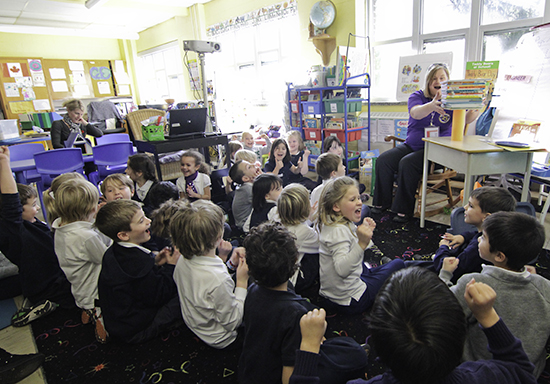 While it is the 150th birthday of our great country, Canada, St. Denis Roman Catholic School on Balsam Avenue is celebrating its 50th birthday.

Did you know that at one time there was going to be a different name for St. Denis?

Originally, there used to be one Roman Catholic school in our East End vicinity, St. Joseph’s, located in Leslieville. Later on, St. John’s came to flourish on Kingston Road, and even later we had Corpus Christi Church and school on Queen Street. Finally, we come to the school in question: St. Denis.

When you ask what makes a school, is it the bricks? The glass? The location? No, it’s the people.

The teachers, the secretaries, the custodial staff, the parents, the children, the spiritual leaders, like Father John of Corpus Christi and Father John of St. John’s.

St. Denis is a small school, but it has a huge heart.

The school has excelled in many academic programs over the years and the students who have left there to go out into the world show this over and over.

St. Denis not only excelled in academia, but also in sports and social clubs, while at the same time practising their religion through numerous rites.

There are so many examples of good times: the playground, the great contribution to World Youth Day 15 years ago, where we played host to the young pilgrims from Taiwan – that’s one event we will never forget.

It’s impossible for me to single the numerous people and moments that have helped make St. Denis what it is today, so why don’t I let a Grade One class from 30 years ago take a shot at it:

S is for students all shapes and sizes

D is for discovering many different words

E is for experimenting in the science fair

N is for the numbers we can add and subtract

I is for the important information I learn

S is for the school that makes us super special

… and that spells St. Denis

We must also give credit to our Parent Teacher School Volunteers, who always will have a special place in my heart – you know who you are. One great event to this day is the annual school picnic in Kew Gardens. If you want to see St. Denis school spirit, come and witness the parents, teachers and students having a great time together.

St. Denis school spirit cannot be broken. There have been some sad times, however. Years ago, school enrolment in the East End declined and it was time to make some tough decisions. Because of the poor enrolment, something had to be done. Schools must be closed!

So, one of our great schools, Corpus Christi had to close its doors – a great loss to the Beach community. Others wanted to merge St. John’s and St. Denis, but ultimately, cool heads prevailed and St. Denis retained its status – still standing, small but strong.

For those still wondering what St. Denis was nearly called – thanks for hanging on.

Many years ago, the Archdiocese was thinking of rearranging our church boundaries and schools in the East End. Leaders were going to put in a new church and school between Corpus Christi and St. John’s. The boundaries of Corpus Christi were to be stopped approximately at Lee Avenue. The boundaries of St. John’s were to be rearranged. And a new school was to be built. The name of the church, and possibly the school, was to be called St. Bertha’s.

To honour the 50th anniversary there are two events planned. The St. Denis Community Mass on Thursday, May 11 at 7 p.m. at Corpus Christi Church. Then, we will have an open house on Saturday, May 13 from 11 a.m. to 2 p.m. at St. Denis, 67 Balsam Ave. We hope to see everyone there – former students, parents, teachers – so we can share our stories.