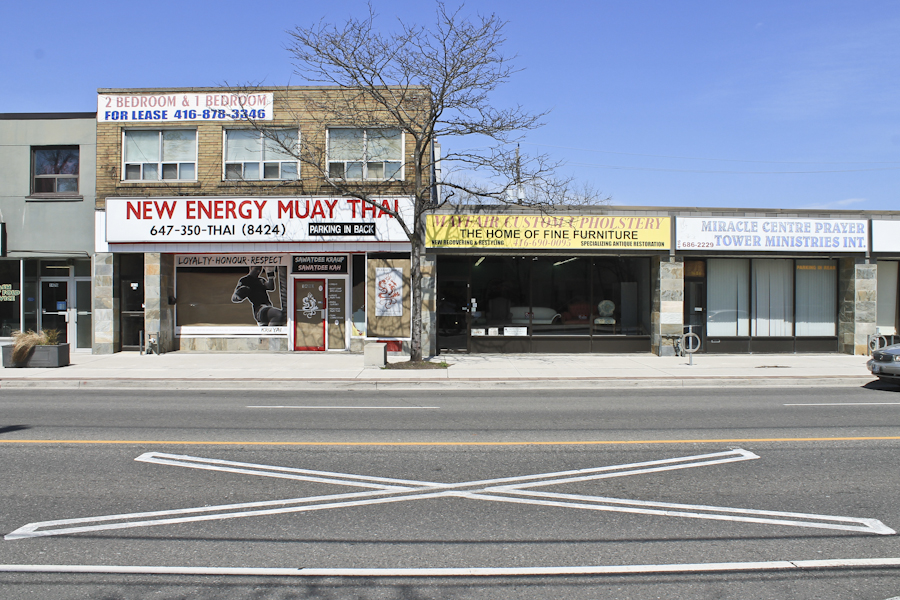 Plans for a mixed-use development on a well-known retail stretch of Kingston Road began to emerge early this year, with businesses along the Birch Cliff strip receiving notice in January that they had six months to vacate. Not six months later, the strip sits largely empty with a number of windows boarded up.

At the time, many of the businesses voiced their concerns about having only six months to pack up and move. Ward 36 councillor Gary Crawford tried to allay fears in February, saying he felt confident after speaking with representatives of the developer that they would work with the current tenants to find a more suitable solution for all parties.

“Core Development continues to work closely with my office, Economic Development and a number of businesses,” said Crawford April 26.

This includes Roy Clifford, owner of The Salvage Shop, one of the only businesses still operating along the strip, who said he’s been so distraught over the move that he “forgot to eat the other day.”

He said Core Development has offered to help him find another suitable location, although “they haven’t come up with anything yet.”

Now, at least one tenant is going head to head in a legal battle with the development group.

New Energy Muay Thai & Fitness vacated their storefront location earlier this year, and left with it a sign in the window saying they were moving, effective March 1, and alleging – with colourful language – that the new owners have no respect for businesses along the strip.

Core Development has since filed a claim for breach of contract and thousands in unpaid rent.

Meanwhile, New Energy has filed a counterclaim alleging the developer has violated the terms of the lease.

“We allege the developer violated the terms of the lease by building a condo within the timeframes involved,” said New Energy lawyer, Omar Ha-Redeye.

According to the claim filed by New Energy, the building’s previous landlord – who sold the premises in January 2017 – provided a provision in their initial lease agreement stating they would provide six months notice in writing should they decide to proceed with a full or partial demolition of the building and if that were the case, they would give notice to the tenant no less than four-and-a-half years into the initial term from the date of the lease.

Although New Energy signed a new lease in October 2016, they claim that it has no legal force and effect as it was signed under duress and argue that because they opened their facilities around April 2014, the earliest date the demolition clause could be invoked by Core Development would be August 2018, as per the original lease agreement.

Bryan Nikoliation, President of Core Development Group responded to these claims saying “we take pride in the communities we’re investing in. We’re working with the sales centre and we’re working within the contracts, the leases that they have for the notice.”

He said that other businesses along the strip left before their leases were complete as well and said, “it’s disappointing that some of the tenants have willingly breached the contract of their lease. We are working within our legal means to ensure that the leases in place are respected.  We look forward to settling this amicably.”

“We’re not in the business of taking anyone to court,” he noted. “We didn’t invite this. We simply want to focus on a wonderful development the community’s going to be proud of and putting back in a bigger and better way the retail, the residential, etc.”

As for New Energy, Ha-Redeye said his “clients are looking for an amicable resolution so they can go back to providing a productive outlet for children, youth, and adults to channel their energies into.”

The court date for the case – if needed – is still yet to be determined. Once Core Development files its application with the city, the city will begin the community consultation process.

There should be a law that developers must give first option to retailers they would otherwise kick out — not help to find them space elsewhere, but provide them with space in the place they already were! Then, stores that have been serving the local community for years and years can continue to do so, and brand-new retail doesn’t sit empty for years and years, or get leased to yet another Shoppers Drug Mart.

No, developers should be required to do what they have agreed to do under existing leases negotiated in good faith. Nothing more!

As most people are aware of the developers are greedy and only think of their own needs and how much money they can green their pockets with they do not care about people or businesses they only care about themselves and then the city gives them permission to do whatever they damn well feel like. Development is good if it is done in the proper way and the height restrictions for the area. The city of Toronto should be telling the developers what they are allowed to do and not the other way around. And yes some of those businesses in the area are actually needed to stay in the area to service the customers conveniently.