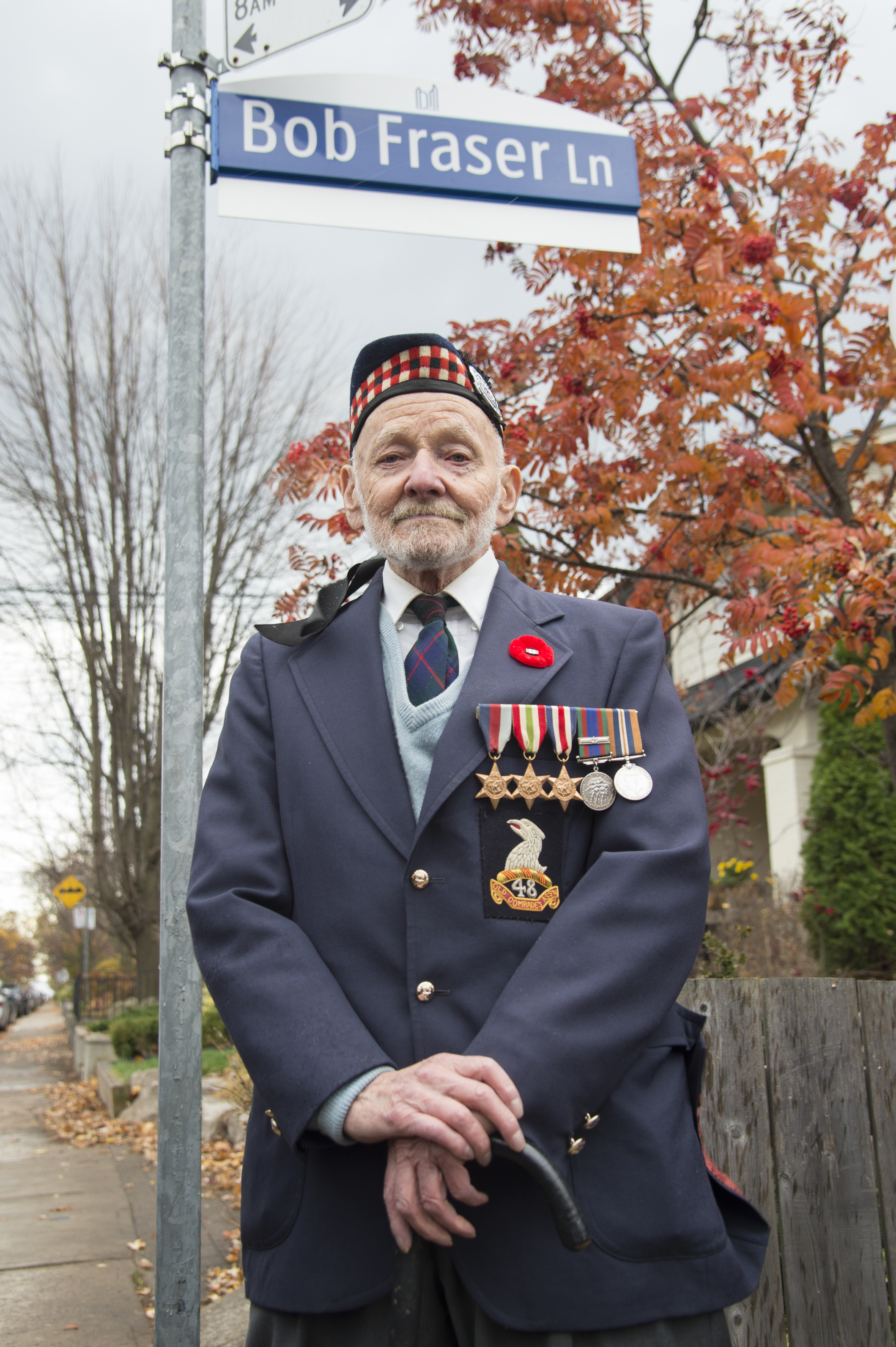 Bob Fraser stands below the Toronto lane named after him. PHOTO: Submitted

Beloved Beacher and WWII veteran Bob Fraser, who lived for over nine decades at his home on Silver Birch Avenue, passed away April 17 at the age of 92.

Known for his paintings of every day life in the Beach, Fraser was recognized in 2015 when a laneway near his home was named after him.

A celebration of life will be held April 29 from 1 p.m. to 3 p.m. at Giffin-Mack Funeral Home located on 2570 Danforth Avenue.

In his memory, Fraser’s long-time friend Rory O’Shea wrote the following on his Facebook page:

Sadly the time has come to bid farewell to friend and neighbour, Bob Fraser.

Bobby was a gentle soul and talented artist.

The Toronto native enlisted with the legendary 48th Highlanders at the age of 18 and after returning from serving in WWII graduated from the Ontario College of Art.

Overseas he saw combat – advancing against the “Hitler Line” through Italy in 1944. He was also part of the Canadian forces to liberate Holland in 1945.

He lived for over 90 years in the same house in Toronto’s Beach community and two years ago had a local lane named after him.

He was living, breathing history for our kids to learn and appreciate the sacrifices that were made by so many so we could have the lives we do.

As such, Bobby was delighted to be a guest of honour at school assemblies for Remembrance Day ceremonies.

When walking into a restaurant for lunch wearing his full 48th Highlanders regalia he would receive a warm round of applause – and humbly acknowledge the show of respect and appreciation.

He was proud of his service. We were proud to know him – and thanked him every year for his contributions for this country.

Four months ago he collapsed on his front porch. Paramedics tried for 20 minutes to get a pulse. And, much to everyone’s amazement, they did. The Nazis couldn’t take him out so a little thing like heart-stoppage wasn’t going to finish off this old soldier that easily.

Bob made a rapid and seemingly miraculous recovery – moving from East General to Bridgepoint for rehabilitation and eventually to Sunnybrook Hospital’s Veteran’s Wing.

But alas – just 2 months shy of his 93rd birthday – Bob’s time here ended yesterday. When I visited him 2 weeks ago he was still sketching. Soldiers. The war became a lasting part of him. But it’s truly peace time now.

Thanks again for your service, Bobby. And your friendship.

I can guarantee your next fish & chips will be heavenly.