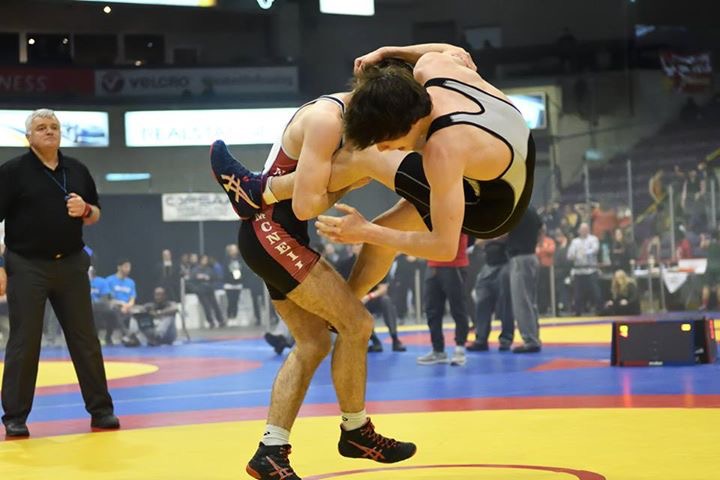 Two Grade 11 students from Neil McNeil High School managed to wrestle their way to the win at the Cadet/Juvenile Canadian Championships in Windsor, Ontario on April 7.

The championships featured twelve competition mats that included men’s freestyle and women’s wrestling at the cadet level – 15-16 years of age – and men’s freestyle, Greco-Roman and women’s wrestling at the juvenile level – 17-18 years of age. The event was hosted at the University of Windsor and by the Essex Wrestling Club and the Ontario Amateur Wrestling Association.

Scott and Jordan were also winners at OFSAA this year where they competed for Neil McNeil. “[Scott] won without having a point scored against him [and] Adam only allowed one point against him the entire tournament,” said coach Jay Jordon.

“Dave Mair, Mike Quinsey and I are happy to be coaching at Neil McNeil and in the Beach and Leslieville area with Central Toronto Wrestling Club,” he said. “We’re very proud both of these two athletes. They won the first wrestling gold at OFSAA for Neil McNeil in 27 years.”

The pair will now will compete at Cadet Worlds in Athens, Greece this September.

Congratulations to those two wrestlers and good luck in the worlds.I was fortunate enough to compete in OFSAA in two years of my high school days at Neil McNeil.I was fortunate to win a match at OFSAA my first year there and compete again the same year of the last gold won by Neil McNeil alumni.If my memory serves me well it was my friend Fred Ortencio.Also Derrick Ortencio won Bronze that year.Great memories!