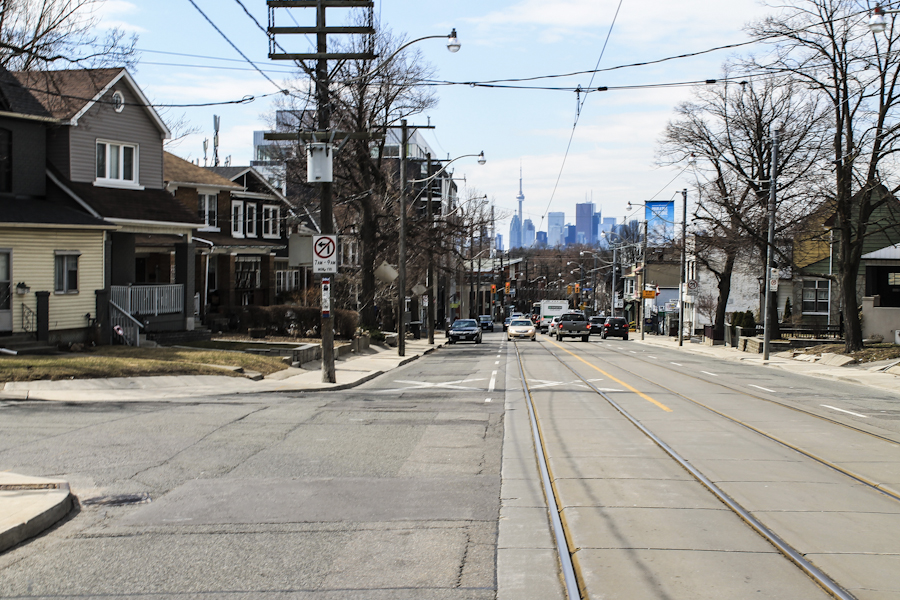 The Woodbine Avenue and Gerrard Street East intersection sits in the Beach Hill pocket overlooking the Beach area to the south and the sparkling lights of the downtown core to the west. The bustling Danforth strip is a short distance away to the north.

Part of a tight-knit community, the area is marked by Edwardian homes, tree-lined streets and small, locally-owned shops. Most recently, the Beach Hill Neighbourhood Association installed a suite of custom colourful benches along the sidewalks that add to the ambience of this charming community.

In this first of a recurring series on the intersections and neighbourhoods that make up our main ‘hood, we take a look at what helps Woodbine and Gerrard in Beach Hill stand out.

TIME TO THE DOWNTOWN CORE:

Walk: More than one hour

The Beach Hill Neighbourhood Association (BHNA) was formed by a small group of local volunteers in 2012 in an effort to support the revitalization of the Upper Gerrard Street East area. Since then, the BHNA has worked tirelessly to promote a ‘shop local’ attitude and the continued growth of a safe and walkable neighbourhood with a strong sense of community.

Much to the delight of members, the positive origins of the group have remained to this day. “I think one of the things that people have prided themselves on was that it didn’t come out of a negative, it was more, Let’s come together and make it as lovely as we can,” said member Jane Irwin.

The BHNA is responsible for planning a number of events throughout the year and manages neighbourhood beautification projects such as tree plantings, social events, the annual fall fete, which last year focused on celebrating the installation of the Beach Hill benches, and in December, the Bake-O-Rama, which raises money to go towards the Out of the Cold program at St. Aidan’s.

The group is funded through annual memberships which cost $20 per year, per household. Paid members receive a weekly e-blast with updates about news and events in the area, but residents can also follow along through their social media presence on Facebook and Twitter.

Budapest Restaurant is a relatively new fixture in the Woodbine and Gerrard area, but has quickly become a local favourite. Located at 1959 Gerrard St. E., Budapest specializes in cooking fresh and authentic Hungarian food with signature dishes that include schnitzel, chicken paprikash, and cabbage rolls.

With 4.8 stars on Yelp, a spot on their Canada’s Top 100 Restaurants list, and a long list of glowing reviews online, they have developed quite a following.

Go early or book a reservation in advance though – while the portions are known to be large, the restaurant itself is cozy.

Sitting almost directly across from Budapest Restaurant is Zante Bistro, a new Greek/Mediterranean restaurant that has been getting rave reviews since it opened. Their menu offers a number of traditional Greek dishes but also offers items such as a 10 oz New York Steak and Ontario Pork Chops. Patrons say the calamari is the must-have item on the menu.

On the northwest corner of Woodbine and Gerrard you’ll notice a funky blue sign with the name Ruby Tuesdays on it. While you won’t find any fine food fare here, you will find cheap beer, pool tables, and a jukebox that’s known for its long list of favourite tracks.

If you’re looking for a morning boost, The Bandit Coffee Group,  1925 Gerrard St. E., is the place to go. The shop’s warm lighting and natural brick backdrop provide a soothing setting to balance out the morning zing you’ll feel after sipping on their espresso. If you forget to eat breakfast before running out the door, they serve a selection of delicious pastries and paninis to stop the stomach grumbles before they start.

An added (and unexpected) bonus – The Bandit also offers garment cleaning. The coffee group has partnered with TSC Wet Cleaners and acts as a depot for patrons to drop off and pick up clothes for cleaning.

East of Eliza Flower Shop and Garden Centre has been in business since 1988. The shop, which can be found at 1960 Gerrard Street East, creates beautiful bouquets fit for events and also

caters to the home gardener with their seasonal outdoor containers and host of garden services including design and planting, garden parties, and staging for real estate.

Just west of Woodbine and Gerrard is The Turquoise Room Spa. The small yet quaint spa is a little piece of blue heaven offering pampering services such as manicures, pedicures, facials, massage and more.

Cassels Park sits just to the southeast of Woodbine and Gerrard between Gerrard Street East and Burgess Avenue, and is known and loved by area dog owners for its off-leash dog park. The park also has a children’s playground area, which is currently receiving a refresh that include upgrades to the existing swings, a new lighting installation, and the installation of a new gazebo.

Wildwood Crescent Park is the closest in proximity to the Woodbine and Gerrard intersection and while it is smaller than Cassels Park, it also boasts a playground area as well as an off-leash dog park.

NEW TO THE NEIGHBOURHOOD

A change from the Edwardian homes that line the streets, the modern Beach Hill Residences – the newest condo development in the area – sit on the southeast corner of the intersection and can be spotted from a fair distance away thanks to a unique design that incorporates blue and green blocks of colour throughout the exterior.

Designed by architects RAW Design, built by Carlyle Communities, and managed by Berkley Property Management, the condo stands six storeys tall and contains approximately 64 units that range from one to two bedrooms in size, plus penthouse units.

Chris Sinden has lived in Beach Hill for 15 years and has been a resident of the Beach for a total of 21 years.

How has it changed?

“This strip has changed a lot. I mean, the housing prices are stupid. There’s not a lot of young families moving in. It’s a lot more established people moving in – lots of money.”

“This is my favourite coffee shop,” he said, while sitting inside The Bandit. “I work from here, [but] I have a family so we spend a lot of time at The Goof (on Queen Street East). It’s cheap, it’s easy and everyone has something they like to eat there.”