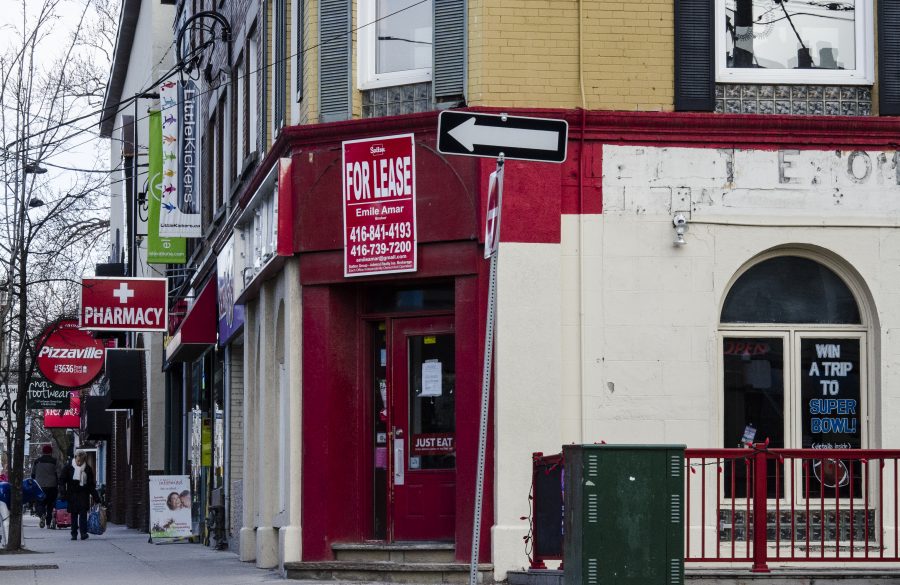 Another one bites the dust.

Local residents were caught off-guard early in February when a note appeared in the window of St. Louis Bar & Grill informing customers that the restaurant had ceased operations effective immediately. The franchise had been in operation on Queen Street East for more than five years and was a favourite meeting spot for locals, offering food, drinks and entertainment including the musical renditions of Tequila Mockingbird and comedic relief courtesy of Top Shelf Comedy.

“Rising rent costs and reduced foot traffic in the Beach together with a community that prefers to support locally-owned and operated restaurants has led to financial difficulties for many franchised businesses in the Beach, including St. Louis,” explained Lisa Roscoe, VP of Development and General Counsel, St. Louis Franchise Limited in an email about the closure.

But the difficulties felt by the late Queen Street East St. Louis reverberate beyond franchises.

Serge Kuchuk, owner of The Green Eggplant – arguably one of the Beach’s most popular restaurants – said that it has been “a very bad experience” for many restaurants along the strip – both franchised and locally-owned.

What is your experience with restaurants and rents on Queen East? Share your stories and solutions in the comments section, below.

It’s an experience that’s caught the attention of the city, with mayor John Tory using the street as a staging area for an announcement about plans to reduce Ontario’s vacant property tax rebate, as well as new rules for Queen Street restaurants being considered by city hall.

Vacant storefronts “have a negative impact on a neighbourhood’s health. The boarded up stores are unpopular with residents. They are, as councillor [Mary-Margaret] McMahon said, ‘an eyesore’ and they impact the liveliness of Toronto’s main streets,” said Tory.

While Tory pointed to the tax rebate as a contributor to the high number of vacant storefronts in the area, experts say there are a number of other factors at play that are not only hurting current business owners, but keeping potential tenants out of the area as well.

Rami Kozman, a sales representative at The Behar Group Realty Inc. Brokerage said that “generally speaking I’ve found that national brands are wary of the [Beach] area as there is an impression – whether true or not – that locals tend to favour independent retailers over chains.”

In addition to this issue, Cathleen Harnick, a sales representative with Regent Street Commercial Corp Real Estate pointed out that while the Beach is viewed as a desirable neighbourhood for many tenants, office density is lacking, which means that any incoming concept must be able to rely primarily on residential neighbourhood traffic. According to a 2015 Environics Analytics demographics study, approximately 30 per cent of the local population leaves the Beach area during the daytime hours.

The Green Eggplant’s Kuchuk also said that even with his solid customer base the cold winter months put a strain on his business.

“In the Beach, winter is a very difficult time here,” he said, adding that the “March Break weather has really hurt the business.”

“[Clients would] rather order online and get [food] delivered than come into the restaurant,” he said. “But when I have Uber, they charge me 30 per cent for the order [so] I don’t make 30 per cent.”

Adding to these industry specific issues is the fact that rental rates in Toronto are sitting higher than ever before – a fourth quarter Toronto Real Estate Board report listed city-wide commercial rates as sitting at $20.65 per square foot net, up from $16.88 in 2015. Rates that Kozman said tend to be even higher in the Beach compared to similar neighbourhoods around the city. “Looking at similarly mid- to high-income neighbourhood retail corridors such as Leaside, Bedford Park, Danforth, I’d say that asking rents are comparably higher in the Beaches, at least along that prime strip [of Kenilworth Avenue to Lee Avenue].”

And these days, landlords are not afraid to ask for the rates they desire. Kuchuk said he “moved locations because I couldn’t afford the rent that the landlord asked me.”

Much like the neighbourhood itself, the issues remain unique to the area with Kozman noting that “Queen West is certainly a large tourist draw and sees consistently high rents, but its proximity to downtown Toronto, the Entertainment District and U of T make it difficult to compare. The Beaches is also somewhat isolated as outsiders must go out of their way to seek it out whereas Queen West is an artery for commuters living further west … There’s no other part of the city I’m aware of with this particular dynamic.”

Rebate could be scrapped

The city says it is taking steps to alleviate the vacant storefronts on Queen Street East and throughout the city. Earlier this year Tory, flanked by councillors Mary Margaret McMahon and Gary Crawford, shifted the focus to the landlords with plans to scrap Ontario’s vacant tax rebate program in order to reduce the number of shuttered stores and increase the number of businesses.

“This is an energetic neighbourhood, it’s one of our most energetic neighbourhoods,” said Tory as he spoke on Queen Street East. “It’s one you’d like to look to as a model and yet, these properties are empty and at least some of the reason for that, I hope, is the fact that they’ve been receiving an incentive that almost encourages them to remain empty.”

The current program offers a 30 per cent tax rebate on commercial properties that have gone unused for more than 90 days, and 35 per cent for industrial properties.

According to a city report released in 2014, the tax rebate cost the city $367 million between 2001 and 2013 with about half of those funds going to businesses in the downtown core.

With little financial incentive to encourage landlords to seek out new tenants, many have left their commercial properties sitting empty while property values have continued to escalate, said the mayor. In some cases, those properties have been vacant for decades.

Despite support from Tory, the vacant tax rebate still requires approval from the provincial government. The hope however, is that it will be ushered in before the end of 2017.

On top of improving the appearance of city neighbourhoods including the Beach, Tory estimated it would save the city approximately $22 million. A portion of the budget that could be redistributed accordingly, rather than put towards funding empty storefronts.