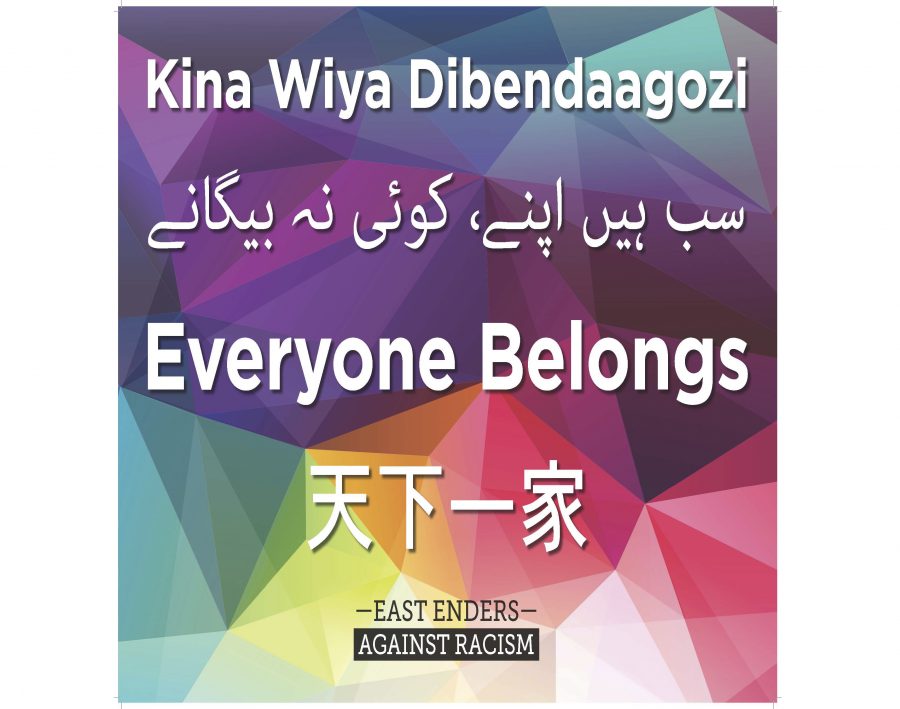 Signs like these will soon be seen on East End lawns, part of a local anti-racism campaign. PHOTO: Submitted

East End Toronto lawns are about to get more colourful — and compassionate — thanks to a new anti-racist sign campaign launching this weekend.

East Enders Against Racism — a group that formed in response to white supremacist posters that appeared in Stan Wadlow Park late last year — is inviting people to a community event at the East York Civic Centre this Saturday morning from 10 a.m. to 12 p.m.

There, residents can pick up one of several multi-lingual signs to erect on their property and connect with other like-minded individuals, and hear more about different actions around the city.

The signs state “Everyone Belongs” and “United Against Hate” in English, French, Arabic, Urdu, Cantonese and Bengali, and in Anishinaabemowin, “recognizing the Indigenous people whose land we are settled on,” reads the event press release.

The event is family friendly, with plans for a book reading for children and an art and play area.

For people who cannot make it to the Saturday event, posters are also available at Old’s Cool General Store on Westlake Avenue.

I like it! I’ll get one and be happy to put it up!

These signs are not permitted under city by-laws. I presume the same people who constantly yammer about off-leash dogs being in breach of the by-laws will pick up the torch on this one also.

Pretty sure that people who know that these signs are supposedly not permitted under city by-laws, are the same sticklers about other by-laws, like off-leash by laws. Sorry Joe.

It is important to stand up against people who spread hatred and fear, such as white supremacy loonies. Unfortunately they cannot be ignored and we have to let them know that their opinions are not welcome/legal. No space for “supremacy” in our community.

Ahh, the usual rationalization that my cause is so virtuous it entitles me to ignore the law.

It’s called civil disobedience. Perfectly reasonable people often challenge laws when important social causes are at stake. Nothing wrong with it provided no one is materially harmed.