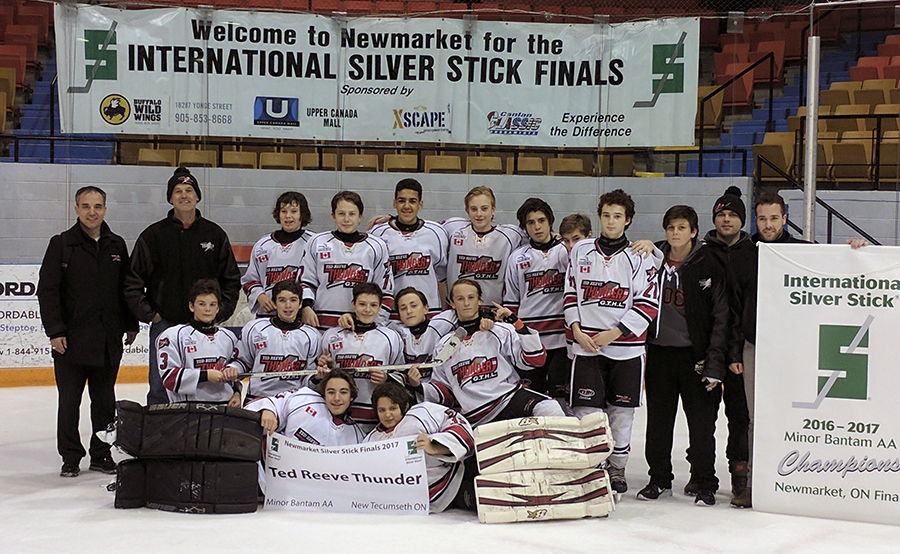 In a feat that seemed near impossible, the Ted Reeve Thunder Minor Bantam AA’s have taken home their second Silver Stick championship win in a row.

The 2015/2016 returning champions knew the odds were against them said coach Michael Saini.

“It’s difficult to win it back to back, but we thought we’d at least give it a try.”

And try they did – the team fought hard for their win, playing some of the best teams in the league including the final game against the Motor City Machine, which they won with a final score of 6-1.

The celebrated tournament hosted more than 20 talented teams from Canada and the U.S. but, according to Saini, it was teamwork and targeted training that allowed the Thunder to outplay and outwork all of their competitors.

The team now has a chance to attend to some “unfinished business,” said Saini.

Although they won the Silver Stick championship last year, when it came to the cities tournament the team were unable to carry on their streak and did not qualify for the provincial tournament.

Since this will be Saini’s last year coaching the Thunder – he’s been the coach of the 14-person team for eight years now – he’s particularly hopeful this will be the year they go all the way.

“We’re in a good spot now. We’re first in the league, so hopefully we’ll be able to clinch first in the east and then represent the east in the finals this year,” he said.

Saini remains confident the team’s training and overall skill level will help secure the win, noting that during the season the players focus more on the small parts of the game which allows them to excel when it comes to tournaments.

During practice, players work on different stations in order to improve and hone their skills in specific areas. Saini also believes their small team size has helped with improving skills and encouraging a more cohesive team dynamic.

“No one sits, everybody plays,” he said. “And that’s really important too because when we win a tournament like the Silver Stick, I don’t want any of the players disappointed that they were not more of a contributing factor to the game because when those gloves and helmets come off, and they go and get their goalie at the end it’s important that they feel like they were all part of the win.”