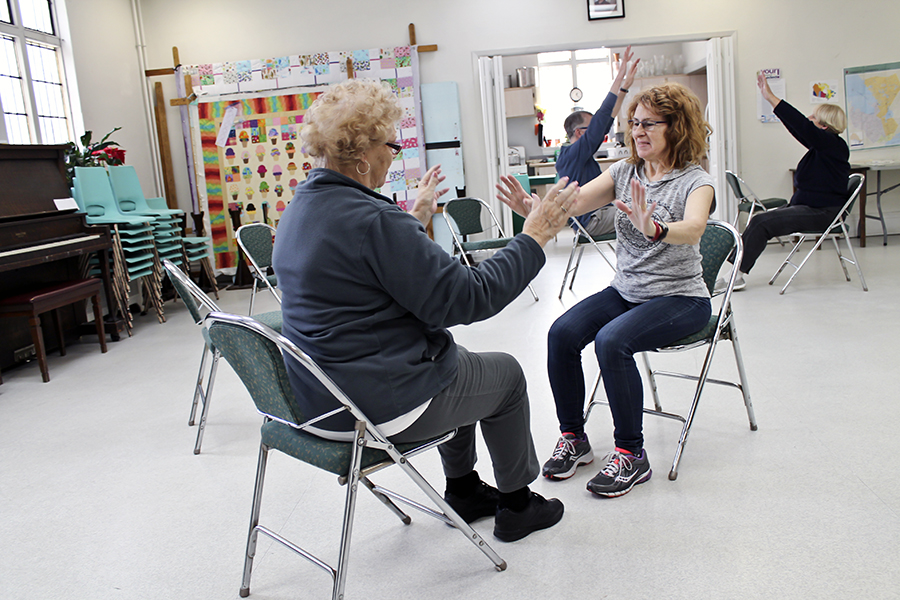 It’s a disease that affects only a small percentage of the population, but for those unlucky recipients, Parkinson’s disease can be a debilitating and depressing diagnosis.

While there is currently no cure, recent studies have honed in on how therapeutic activities like dance may offer some relief to Parkinson’s patients and their families.

Claire Wootten, an Upper Beach resident and professor of contemporary ballet and dance education at York University has seen the “astonishing transformation” dance can bring about in her weekly class created specifically for people with Parkinson’s.

“It’s not considered therapy, but it has therapeutic value,” she said.

Wootten has been teaching movement classes for more than 40 years but was more recently trained in dance for Parkinson’s by Sarah Robichaud, a classically trained dancer who designed the Dancing with Parkinson’s program in collaboration with Dance for PD – the company that originally started the movement.

After receiving mentorship and training from Robichaud and David Leventhal – the program director and founding teacher of Dance for PD in Brooklyn, NY – Wootten decided to bring her knowledge to her home community by starting her own Dancing with Parkinson’s group at the Kingston Road United Church.

Her class is the first of its kind in the neighbourhood, and one of the first in the city.

The dancing itself is a fusion of various dance and movement forms, she said.

“We start seated and begin with a sun salutation, breathing and getting focused. Then we do isolations and space exploration while sitting, then move into isolations and start getting bits of the body moving,” she said. “It’s a whole body awareness but you just do it piece by piece.”

Wootten also noted that “music plays a huge part in it.”

A 2008 Scientific American article says music is a key part of movement therapies because synchronizing music and movement engages a “pleasure double play” that simultaneously stimulates the reward centre in the brain when listening to music, while stimulating the sensory and motor circuits with dance movements.

“It addresses a number of the symptoms,” said Wootten. “The research that has been done, that [Robichaud] has been experiencing anecdotally for many years, is that it helps a great deal with depression and isolation because there’s the community piece of it.”

“Also they’ve discovered that it truly does create new neural pathways in the brain. So what can happen is if somebody is taking a [dance] class, their neural pathways are assisting them in lots of ways to be able to start moving better,” she said. “Dopamine is a big player as well.”

Parkinson’s disease falls into the category of motor-system disorders – disorders that develop when dopamine-producing cells in the brain deteriorate – and because dopamine is one of the elements that is essential for movement and coordination, many patients experience symptoms such as tremors and difficulty with balance, leading to an increased risk of falling.

Gammon M. Earhart, a professor of physical therapy at Washington University who was one of the first to discover the benefits of dance, found that it can be therapeutic because of its ability to address balance, help strength and flexibility, and improve cardiovascular functioning.

Choreography also served to help specific difficulties that PD patients faced such as turning or stepping backward. She discovered that learning a strategy to overcome these movements – by learning proper foot placement and weight bearing techniques for example – helped to counteract the issues they had been facing.

“Someone might really be having trouble even coming into the room and might need assistance sitting or standing and then by the end of the class – I have definitely experienced this – people are waltzing and chatting. It’s pretty astonishing,” she said. “It’s just…it’s breathtaking.”

This isn’t just important for their physical well-being, she said, but the well-being of their minds – and the minds of those who love and care for them, as well.

“For the Parkinson’s dancers they start to feel that they have some agency over their bodies. For their partners, the caregivers who see this, it’s quite an astonishing transformation,” she said.

“They can often walk out better than they can walk in. It’s that fast. And it does tend to last a period of time. If they’re doing it regularly they can experience it on a regular basis.”

According to Wootten, her dance classes are as much about offering some therapeutic value as they are about offering participants some fun and entertainment.

“It’s really lovely to see the dancers interact with one another and laugh … with and at each other and me!” she said laughing. “It’s very rewarding … I don’t ever imagine stopping teaching. The idea of not teaching is complete anathema to me.”

Wootten holds classes every Tuesday between 1-2 p.m. at the Kingston Road United Church and all are welcome. Student volunteers or those wanting to be trained as dance accompanists are also welcome to contact her by email at clairefwootten@gmail.com.