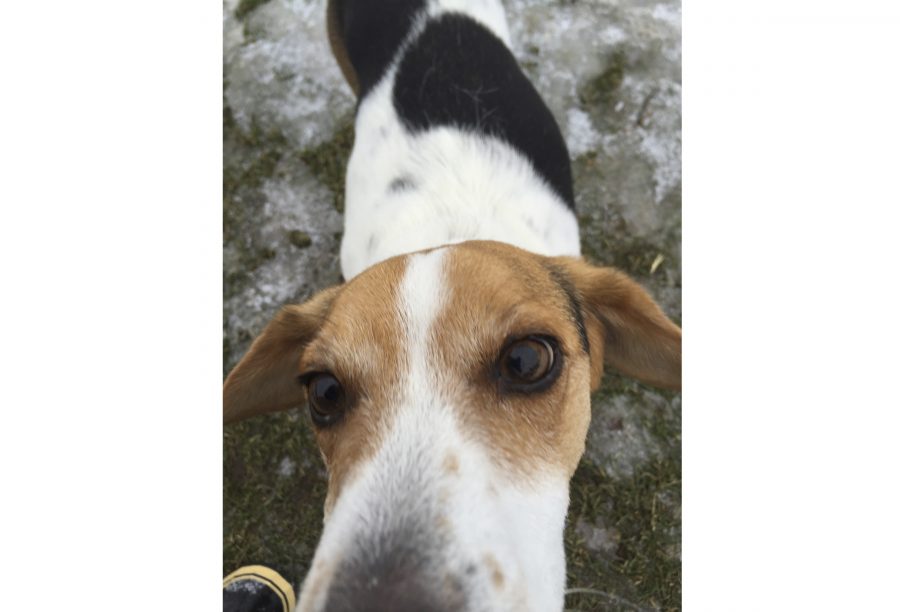 Happy New Year! –  it’s something we say as well as hope. Unfortunately 2016 will go down in history as not such a happy one and we certainly have our concerns about 2017. But my New Year’s resolution is to beagle it up by being more optimistic about things. So when it comes to 2016’s bad reputation, I say thank goodness a year is made up of moments or we’d never see the trees for the forest. Like dogs do…they always see the tree.

But enough about the sordid relationship between dog and tree, I’d rather focus on those moments that make up a year. We’ve had some good ones believe it or not.

Soon after my Year in Review for 2015, I introduced you to Chip – the Terrier that couldn’t be merrier in the care of Happy Tails Rescue. He’d shown up with a charming under-bite and a not so charming condition known as Cherry Eye. The Cherry Eye was repaired, but the underbite gloriously remains! The ‘Bubba Gump’ look totally suits him and his new family agrees with me! Charming Chip managed to score two human sisters and one dog sister! Add that to a growing collection of toys and life has truly become a box of chocolates!

In April, I shared Ralph’s revival story – a boxer mix with Addison’s Disease at Sheba’s Haven. I reconnected with Ralph at our traditional Christmas visit and noted that his pillow choice hasn’t changed. He still prefers his permanent foster daddy’s lap to your average couch cushion. Catherine, partner to Ralph’s pillow and founder of the Haven, tells me Ralph is currently dealing with some new health issues but he’s hanging in there. Life is good at the Haven and he’s lapping it up – literally.

My Slobberfest promotion hit the Beach in May, just before the annual fur flying event took over the Boardwalk. The article featured our very own Patrick Swayzee – Official Wiggler for the Beagle Wiggle Walkathon that kicked up the sand after the Pack Parade. You may recall Patrick was found swaying alongside the 401 when he was rescued by a shelter in Guelph. Being rather ancient (and toothless after we removed 19 rotting teeth and a bad toe to boot), Patrick has taken up permanent residence at his foster home. It’s a sweet deal. He’s got a mother hen for a daddy, according to mommy, who insists every room comes complete with a dog bed worthy of a prince. His Highness recently hurt his back, but being a typical beagle, he’s recovered quickly and is currently perfecting his snow angels in the backyard.

Speaking of angels, I illuminated an earthbound version last summer when I featured Angel the cat who was temporarily fulfilling the role of Store Greeter at Tails Up Pet Food shop in Port Hope. It comes as no surprise Angel was readily adopted, being an angel. She’s also paved the way for many more cats in need of homes. Since Amy and Dennis opened their store a year and a half ago, they’ve found homes for 22 cats through the in-store adoption program they developed with their local animal shelter. The last adoption took place on Christmas Eve when a hugely friendly orange cat named Big Mike left the store with his new family. Now that’s heavenly!

A rather statuesque Italian Greyhound named Archer followed the cat days of summer as September’s Pet of the Month. It’s a fitting description, considering how terrified he was of practically everything. But despite the cold weather, Archer is slowly melting. He no longer freezes in fear when strangers approach thanks to the unconditional love and support of Carol, his foster mom and founder of Happy Tails Rescue. We should thank her grandchildren, too. They visited over Christmas and he warmed up to them like a scoop of ice cream on a slice of apple pie fresh out of the oven. He’s still shy but Archer is more than ready to melt with you.

Skipping over my November baby for a moment, I’ll update you on Ralph’s competition. Stella stole the show as my last featured pet for 2016. The little senior Pomeranian in the permanent care of Sheba’s Haven has the market cornered when it comes to cuteness. She’s still daddy’s little girl and she’s still chasing after Haven mate Prince who still hasn’t the foggiest idea why. Although she’s in congestive heart failure, Stella’s medication is keeping her comfortable but nothing compares to the healing power of couch cuddles with daddy. Who could blame Miss Cutie Pie for unleashing her inner Viking on poor Ralph and laying claim to daddy’s lap when the mood hits her? All’s fair in lap and war.

Last but not least, I give you Algernon – my November baby.

When it comes to memorable moments in the wonderful world of rescue, there are two types that I personally treasure. The first would be that moment we welcome a dog to our rescue family. That moment is filled with hope for their future.

The other moment is when they pay us back in full. Like anything else, rescue work has its low points when you just want to give up. But it only takes a moment to change all that. Oftentimes, that moment is beautifully unexpected. Like the moment I took this picture of Algernon at our Christmas visit to the Haven (photo at left).

Algernon was the beagle that ingested something and nearly died, which led to our rescue barely surviving the medical costs associated with saving him just a month before Christmas. But Algernon’s story touched the hearts of our supporters so deeply they were moved to give a little extra for the holidays, like when the townsfolk of Bedford Falls saved the day for George Bailey.

It was a beautiful day when I saw Algernon for the first time since his transfer to the Haven following surgery. All the dogs were out playing in the snow.

At first, I didn’t recognize him and not just because he was no longer sporting an IV tube or a body bandage. Algernon was blissfully romping about like it was New Year’s Eve, happy beyond words.

Sometimes it’s good to see the trees for the forest.

My Year in Review has left only two! Eligible Adoptees, Algernon and Archer, are gearing up for a Happy New Year – one happy moment at a time! Join the party! To inquire about Algernon, contact Big on Beagles Rescue: bigonbeagles@primus.ca! To inquire about Archer, contact Happy Tails Rescue: info@happytailsrescue.ca.