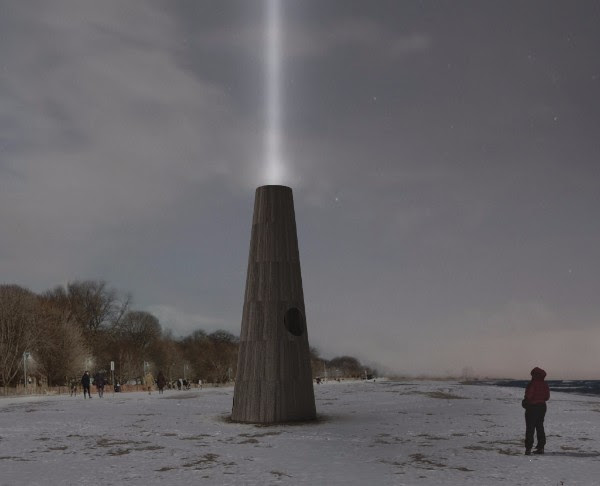 We have just passed the mid-January date known as the “dead of winter”, and that means it is once again time for the Beach to come alive with Winter Stations, the whimsical celebration of winter that transforms the East End lakeshore over Family Day weekend.

Now in its third year, the annual design competition has become one of the favoured public art events in the city and attracts interest from all over the globe. Design firms and schools are asked to reimagine the area’s lifeguard stations, this year using the theme “catalyst”.

“The jury looked for installations that open up the waterfront landscape and reinvent the space for visitors,” read the project’s press materials. “Artists and designers were also asked to consider their entries as a catalyst for change – with thought put into how materials may be re-purposed or reused in future iterations.”

This year’s finalists were announced earlier this month to much fanfare. Five winning designs will join three student installations from University of Toronto, University of Waterloo and Humber College. The designs will be built between February 13 and 19 along Kew, Scarborough and Balmy Beaches if you want to catch the designers in action.

I See You Ashiyu, by Toronto’s Asuka Kono and Rachel Salmela, uses “the idea of Japanese hot spring and warm water to provide physical relief from the cold.” The rendering shows visitors dressed in winter gear, shoes off, above a steamy sauna-like structure.

Or enter an imagined forest with North, by Montreal’s studio PERCH. This design promises to suspend 41 fir trees in mid-air to create “an evocative and colour-saturated canopy that stands out against the white of winter.”

Collective Memory by Mario García, Barcelona, Spain, and Andrea Govi, Milan, Italy takes a considered tack “inspired by the statistic that by 2031 nearly one-half of the Canadian population over the age of 15 will be foreign-born or the child of a migrant parent Collective Memory aims to be the catalyst of present and shared anecdotes. Constructed out of recycled bottles – the archetype for the lost message – two translucent walls will shield the existing lifeguard structure, creating a threshold between shore and city.”

BuoyBuoyBuoy by Toronto’s Dionisios Vriniotis, Rob Shostak, Dakota Wares-Tani, and Julie Forand — which gets props for its expressive (and punny) name — uses many small parts to create a whole. “Each component is the silhouette of a buoy from afar creating a fog or a cloud around the lifeguard station like drops reflecting and refracting the light.”

Portugal’s The Beacon, by Joao Araujo Sousa and Joanna Correia Silva “translates into the archetypical lighthouse conical shape, reduced to its simplest expression and conformed to the lifeguard stand proportions and wrapped in aged wood.” It will act as a temporary drop-off location for non-perishable items.

Flotsam and Jetsam by University of Waterloo will create a 20-foot sculpture that “reveals the realities of plastic consumption, resulting waste and its effects on the aquatic biodiversity of the planet we share.”

“From afar, the structure is incognito, reflecting the surrounding environment and fading into it. Entering the space, the explorer views misconstrued, mirroring illustrations of themselves and their surroundings.”

Midwinter Fire, by students in the Daniels Faculty of Architecture, Landscape, and Design, University of Toronto uses the idea of reflectivity to “expand the illusion of an urban forest and to make the project disappear into the surrounding landscape.”

Winter Stations runs February 20 through March 27 at various lifeguard stations along the beach.