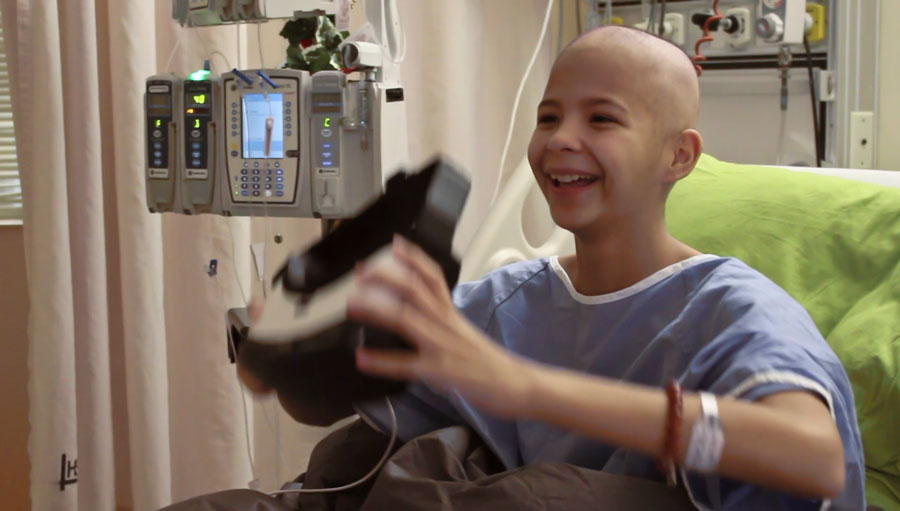 Elina Anker smiles after watching a virtual reality video of her life at home. PHOTO: SickKids

Life can change in a split second and for Elina Anker, it did.

Less than two months ago, Elina went from being a happy-go-lucky Grade 8 student at St. John Catholic School to spending her days being treated for stage three diffuse large B cell lymphoma at SickKids hospital.

Elina’s symptoms first appeared as stomach cramps but after a visit to the hospital, it quickly became clear the situation was more dire than anyone had anticipated. She’s been receiving treatment since.

But it seems the new year has brought with it some positive news for the Anker’s. According to Elina’s mom, Dina, they recently learned “there are no signs of visible tumour left.”

While this is good news, Elina’s not quite at the finish line.

“She has one more round of chemo to complete,” she said. “The tumour is gone but the B cells are throughout her entire body so, you know it’s [in] her blood. It just takes one broke cell for it to reoccur, so even though it’s gone they still have to continue to treat her and monitor her.”

According to Dina, the last round will be about 28 days because the body has to first naturally recover its white blood cells and neutrophils – a type of white blood cell that aids the immune system by fighting off infection.

Once the healing has occurred, they can tackle the last round of chemotherapy. In the meantime, Dina said the two have been overwhelmed by the support they’ve received.

Parents and students in the area have been there for the pair throughout the whole ordeal, offering clothing items, bringing the family meals, coming by for visits and even bringing art supplies to help take Elina’s mind off of her fight.

And St. John school didn’t stop their support after a fundraiser for Elina they held back in November. They set up a visitation schedule so that Elina could spend plenty of time with her friends over the holidays.

“Throughout Christmas she’s had a really great chance to have a lot of those friends spend time with her. Since it’s just my daughter and I, it’s nice that those friends have come over and entertained her. I mean, her and I have been together for…you know, this long a time and I think she needs a break from me at some point,” Dina chuckled as she continued, saying “she also needs that continued kid time.”

Dina also explained that SickKids Hospital has been pivotal in not only providing Elina with the best possible treatment during her illness, but some pretty amazing experiences as well.

She’s been able to meet celebrities including Busy Phillips, cast members from Dirty Little Liars and The Vampire Diaries, and over the holidays, “they kept saying they had some surprise for her,” said Dina.

That’s when they gave her a Samsung Gear virtual reality headset complete with a special video.

“Mom! It’s at home!” Elina said looking around as she watched the water delicately lap onto the rocky beach in front of her. She realized immediately that she was looking at Ashbridges Bay.

And the video didn’t stop there – it took her back to her classroom where one of her friends smirked mischievously during the lesson, holding up a sign that read, “I don’t get this. Do you?” She turned to check if the teacher had caught on as the video moved seamlessly to the school auditorium.

Elina then watched as her friends sat in front of the whole school to shave their heads in a show of support for her battle.

“Elina, this is for you!” William Torrance shouted as he moved towards the camera, pointing to his head to show off his newly shaven scalp.

She smiled, giggling at her friend in the camera.

Removing the headset as her friends at St. John waved goodbye, Elina broke into a big smile, laughing with her mom as she reflected on the moments she had been able to witness firsthand.

According to Dina, they loved the video so much that “when she was feeling better after Christmas we went back to those places. So it was like a real trip back to those virtual reality places.”

Reflecting on the whole experience, Dina explained that thanks to the support of the community and the outstanding care provided by SickKids, Elina told her, “I thought beating cancer would be harder or would be more painful.”

Still, getting the news that her tumour had shrunk so substantially “was a big deal for us and it was a big deal for me,” said Dina, noting that up to that point she hadn’t allowed herself to cry in front of Elina but that moment “was a flood gate for me.

“[But] there was never any doubt in our minds that she was going to recover, you know you have to think that way.”