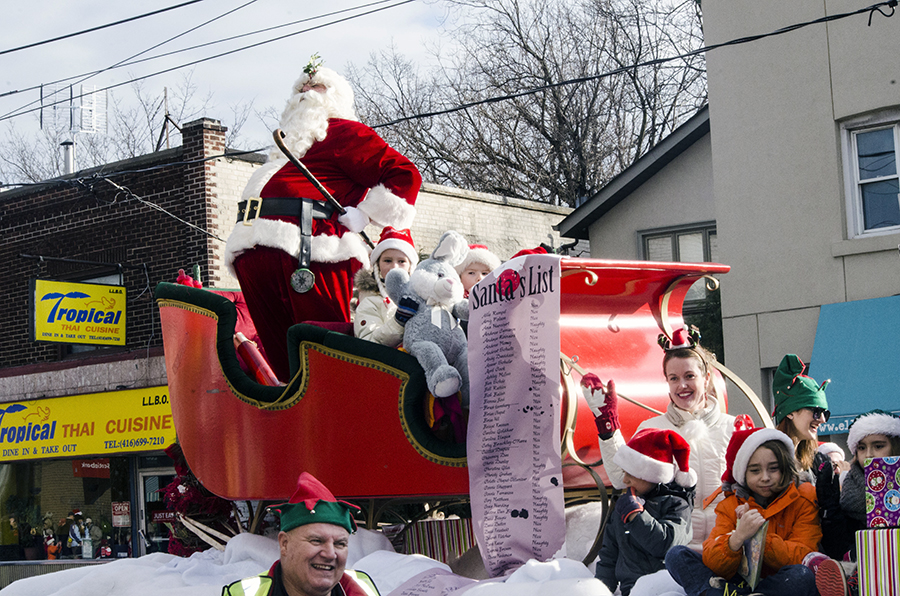 In this season of giving and sharing, especially for those who are less fortunate, we have had a long tradition here in the Beach where everybody young and old chips in. Here is the story of two Beach Santa Claus parades, one 100 years ago and one just a few weeks ago.

Everybody loves a parade, but why do we hold them? The reason is to highlight the spirit of the holidays and open our hearts and wallets for those in need. This spirit has long been around. One hundred years ago, the merchants and people of the East End banded together and decided they would celebrate Christmas with a Santa Claus parade on Danforth Avenue. They had floats and bands, children and adults, beginning their march on the Danforth east towards Greenwood, south to Queen Street, and east to Kew Gardens.

This was during the war and participants had one thing in mind: help the down and out and celebrate Christmas by helping our sisters, brothers and children. The mood was festive, everybody was singing and having a jolly time – the highlight then, as it is today, was Santa Claus.

Back then, it was WWI and things were bleak. Since, there have been hard times and good times, but the spirit of the Beach Christmas kept going.

Many decades later, times had changed – no world war, but still famine, poverty, and military conflicts – and a group of people at Community Centre 55 came together, led by the indefatigable Bob Murdoch to arrange a Santa Claus parade to highlight the centre’s hamper program.

For those who don’t know, Hamper is a program that helps nearly 1,000 families and seniors in the East End with turkeys, hams, food stuffs, canned goods and toys, run and delivered by hundreds of volunteers.

Hamper and the Santa Claus parade bring out all of the best that is in the Beach – all different businesses, sports organizations, and community groups give generously.

The parade starts at Neil McNeil Catholic High School at Victoria Park and Kingston Road and marches to Community Centre 55 on Main Street. There are bands and floats like the ones that marched 100 years ago, and with a similar intent.