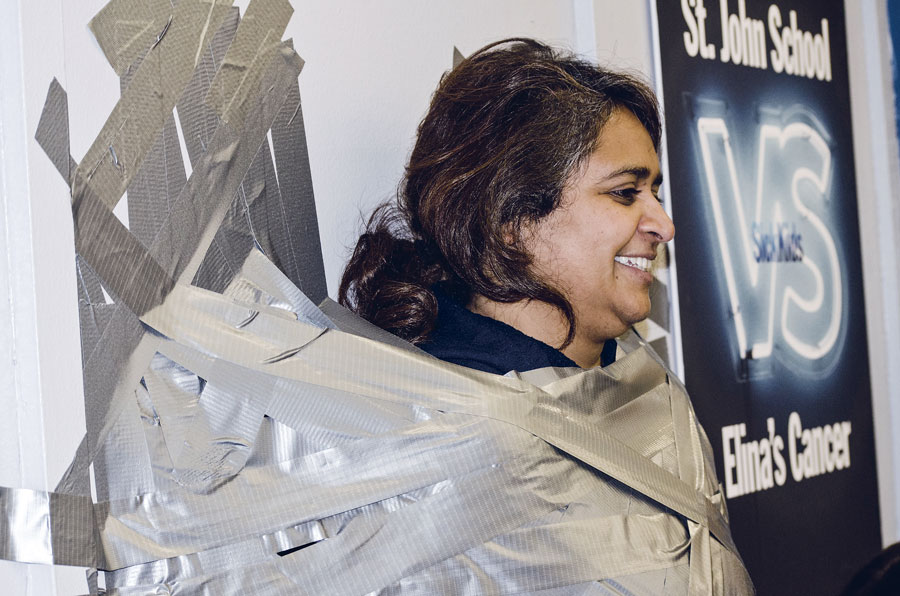 St. John principal, Anne Martin was duct taped to the wall for a good cause, November 25.

When Elina Anker found out she had cancer, she didn’t react with sadness or fear. Instead, she named her tumour “Juan.” As in, Juan be gone.

This remarkable humour and optimism in the face of a scary diagnosis are just two of the traits that make the Grade 8 “class clown” arguably one of the most beloved students at St. John Catholic School.

Cooper Tallis, who has been friends with Anker since they were in junior kindergarten explained that “she’s such a big part of this school. She’s part of school council. She’s big in like, every single sports team. She’s just a big chunk in this school… she’s really funny, like the Grade 8 class clown.”

In order to show Anker how much she means to them and support her during her time of need, the St. John students decided to hold an event to raise money for her family as well as for SickKids Hospital where she is currently being treated for diffuse large B cell lymphoma.

Before Anker was diagnosed, Tallis said students suspected something was wrong “because every afternoon we would see her in pain, like, head on her desk. And then she didn’t come into school one day.”

Still, he said when his mother told him Anker had cancer his “jaw dropped to the floor.”

It was then that Tallis said he came up with the idea to have students shave their heads in front of the school to show Anker that she didn’t have to do it alone.

So on November 25, they did exactly that. The students congregated in the gymnasium to witness Cooper Tallis, Charlotte Gray-Cyre, Claire Hamilton, Bennett Tomaszeski, Xerxes Sales, and William Torrance, and teacher’s Patrick Breech and Eoghan Morishita-Miki, sit on a stage in front of the whole school and shave their heads.

Despite some obvious nerves about losing their locks, the students and teachers kept smiles on their faces as strands of their hair fell to the floor in heaps, waving to the cheering crowd while volunteers from Hair Dynamix and Beach Kidz Cutz shaved their scalps.

Rhea Kohl, one of Anker’s best friends, also cut and donated eight inches of her hair for cancer. Her mother said that this was the second time Kohl had grown out her long hair in order to donate her locks.

Despite originally having plans to wear her hair long for the upcoming semi-formal, when she found out about the event Kohl immediately shrugged off the hair as unimportant knowing her friend needed her more.

The strength and love demonstrated in the gymnasium that day was echoed further by the actions of school principal, Anne Martin, who volunteered to be duct taped to the wall in order to raise money at the event.

Students lined up, eager to purchase their piece of tape and add it to the wall, ensuring Martin was securely fastened in a cocoon of thick grey tape.

A quick tug of the footstool sitting under her feet proved to everyone in attendance that she was, indeed, quite stuck on that wall.

According to Martin, the school raised more than $4,000 during the duct taping fundraiser.

While Anker has a number of treatments coming in the months ahead, her family and friends are ready to rally the whole way through.

“Our school’s trying to make her as comfortable as we can,” said Tallis.