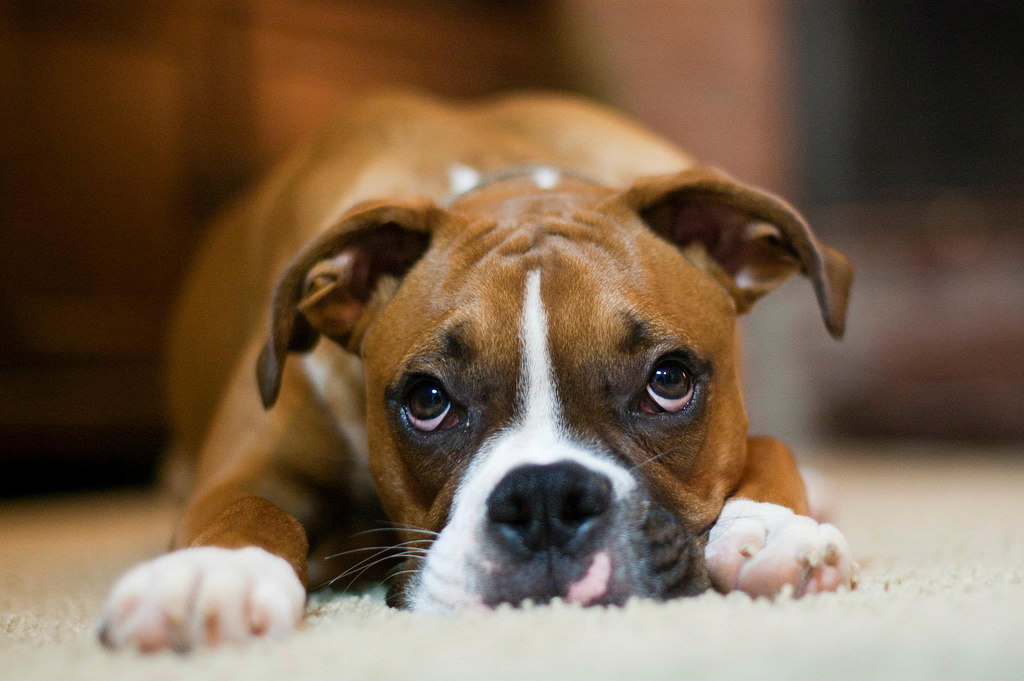 Though it likely won’t be long before this extra long and beautiful fall comes to an end, for now, at least, it still looks and feels like the harsh winter we have been told to expect will hold off a little longer.

Along with being the season of stunning colours and reprieve from the heat and humidity, fall is also the season for a few less desirable things when it comes to our pets. In the vet world, fall is the time of year when we see the most of a common, bothersome and often frustrating problem, particularly in dogs: itchiness.

The most common reason for any pet to develop itchiness is allergies. In the fall, two things happen that make this a particularly bad time of year for allergies. One is the fact that the flea population in the environment is at its yearly peak right now. A relatively small population of fleas exist in the outside world at the start of each summer. Fleas cannot survive the winter outside unless they are on a host. As this small number has all summer to reproduce, by the time late September arrives this population has grown tremendously and won’t be hit back down until we have snow on the ground or at least a few days of heavy frost.

Nearly every mammal is allergic to the chemical in a flea’s bite that stops the blood from clotting as a flea takes its meal. It is this allergic reaction that makes both people and pets very itchy after being bitten by these pests.

Fortunately, we have some very safe and effective preventative medications for our pets to keep them flea free.

Unfortunately, the same is not true for the other big cause of allergies we see in the fall.

Many pets suffer from reacting to the same environmental allergens that affect people, especially airborne pollens from various grasses, trees and weeds. In people with these allergies the fall is also a bad time of year, but the symptoms are usually quite different. Many of the same things that will cause cold-like symptoms in people – sneezing, itchy watery eyes and sinus congestion – will cause itching in our pets, especially in many dogs.

As uncomfortable as allergy symptoms can be to people, in our pets, the intense itchiness poses more than just the obvious problem of discomfort.

The inflammation that occurs in the skin in response to these allergens which produces the itchiness also greatly weakens the skin’s natural barriers from bacteria and yeast. A pet suffering from inflamed and irritated skin due to allergies is significantly more likely to develop a secondary skin or ear infection as a result.

Many pets are at this more advanced stage of having infections on top of their primary allergic problem by the time they get to see a vet. It can take some time and often multiple approaches to get them back to normal again. The infection has to be dealt with as one problem and the underlying allergy as another.

In our pets, both cats and dogs, we also see a fairly significant number of allergies to ingredients in foods. The symptoms for either a food or an environmental allergy can be identical so it’s not always clear which is the cause when we suspect an allergy.

Although noting a seasonal pattern in a pet’s itchiness will suggest that the cause is also seasonal, we know that more often than not, a pet with allergies will most likely be set off by a number of things. Allergies are, after all, not a problem with the food or with the environment but rather how an individual’s immune system responds to these things, so it makes sense that if an individual has a system that tends to “over-react”, it can probably do so to more than just one thing.

For this reason, many vets will recommend a hypo allergenic diet as part of the approach to helping any pet with allergies, even those who have the typical “fall flare up”. By reducing as many of the potential allergens a pet is exposed to, we can lower the overall burden and make the bad seasons more manageable, reducing both the discomfort and serious infections that come with it.

While we can prevent fleas, and we can control diet, there is nothing we can do to alter the allergens in our environment, short of moving to the Antarctic or the desert.

But it does not mean there is nothing we can do to help in these cases before they cause significant discomfort or secondary problems. If your pet has had an itchy fall, talk to your vet about supplements such as omega fatty acids that are natural anti-inflammatories as well as specific diets to help with allergies.

We also have a wide range of specialized shampoos, conditioning and protecting sprays and other topical products that can greatly improve your pet’s skin protection. By starting these types of measures early before the bad times arrive you will be one step ahead and your pet will be much less likely to suffer.

Finally, if and when the problem returns and you notice your pet scratching frequently, get them checked out as soon as you can. These things can go from bad to worse very quickly and our options are much better and the good outcomes often much quicker if we start to act as early in the process as possible.

Itchiness in pets is a serious problem and is one of the major causes for vet visits at this time of year, but some simple preventative measures and early intervention can make this a much easier problem for pet owners to deal with and a much less uncomfortable time for our four legged friends.