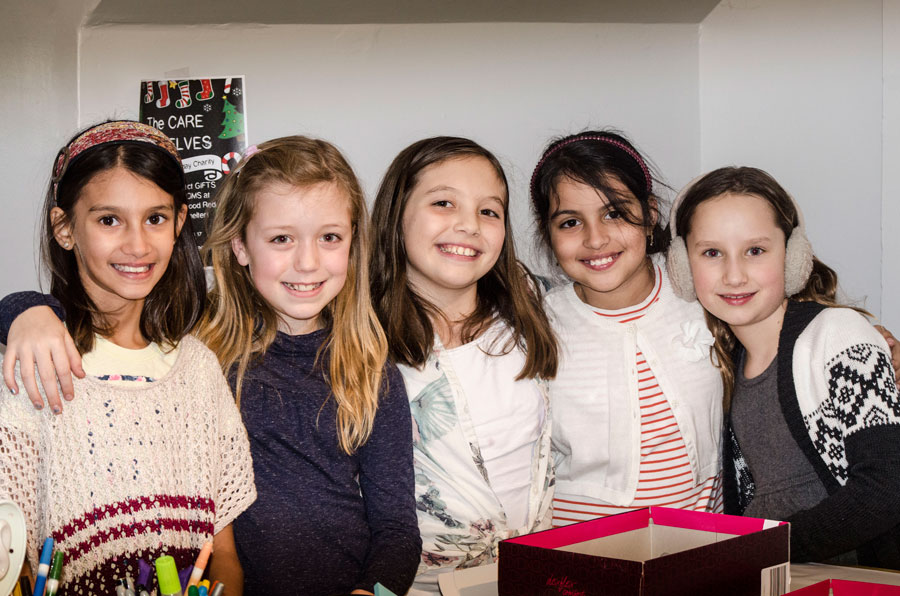 Mother and daughter duo Katharina and Angelina Tropper are on a mission to spread the joy this holiday season.

Their tool of choice? The Care Gift Elves, an initiative started by Katharina this year with the goal of providing children the opportunity to give back to the community and make a difference by helping those in need. The “elves” collect donations and then carefully put together gift boxes filled with toiletries, sweets, toys, and warm clothing among other items.

This year they will be giving all donations to The Red Door Family Shelter, a service that provides shelter to families in crisis and helps them to establish a stable life beyond the shelter.

The idea came to Katharina earlier this year when Angelina, 9, began repeatedly asking for a cell phone.

“We started talking about things that are necessities in life and things that are not and you know, there are some kids in her present school that are in the Red Door  [Family] Shelter so I said let’s find a way to volunteer together at the shelter,” said Katharina.

Unfortunately, they discovered the shelter does not allow volunteers under the age of 15 but that detail wasn’t going to stop the Tropper’s from finding another way to help.

They brainstormed and came up with a plan to put together packages for the families in the shelter.

“Since I couldn’t volunteer, my mother and [I] had this idea where we can basically do like a little group and still help the shelter in a way that my friends can help too,” said Angelina.

The hope was that it would spread some joy and ensure none of the women or children in the shelter would feel forgotten or left behind by their community this holiday season.

At first, Katharina said they just thought they would make one box each, “but then it took off. Angelina’s friends really loved the idea of being a part of something bigger and doing something for their community,” she said.

So with the help of a few more elves, who include Isabel Birett, Kala Crawford, Sophie Chanzy, and Georgian Russell (pictured at left), they began collecting items and putting together more boxes.

“We thought about, you know, getting shoe boxes and ziplock bags and we also did posters and we went around on the block where the stores are and we asked them if we can hang them up so people can bring more stuff,” explained Angelina.

At present, they’re aiming to create 100 in total – 40 for the women and 60 for the children, as per the suggestion of the shelter.

“I went out on Queen Street East and I asked several stores and restaurants and I didn’t think people would want to participate but they are! And I’m still getting emails from stores and businesses that say, oh I got your email and I’d love to participate in one way or another,” said Katharina.

So far, more than 10 East End stores have gotten involved including Mastermind Toys, Baby on the Hip, Good Neighbour, and Ed’s Real Scoop, but they’re also taking donations from anyone who would like to give or get involved.

“A lot of the adults are just giving us the items because they know that the girls are elves. [They] love to do the decorating and the wrapping part of the boxes,” she said. Adding that “ideally we want new items because it’s supposed to be the Christmas gift.”

The elves are also careful to ensure that every box is of equal value with each gift amounting to $35 and containing a specific list of items that will bring joy but also serve a greater purpose such as warmth for the winter.

Thanks to the positive response they’ve received this year, the elves are considering not only making this an annual event but also growing the initiative.

“We were actually playing with the idea of renting one of the rooms in the community centre and all the children can come and help us decorate the boxes, write care notes, things like that,” said Katharina. “So then it becomes more of a team … so that the children have a sense that they belong to a greater cause.”

As for the ‘Elves’ themselves, they can’t wait to bring the boxes over to the Red Door Family Shelter. When asked if they were excited to share their care gifts, they all nodded and smiled brightly saying, “yeah” in unison.