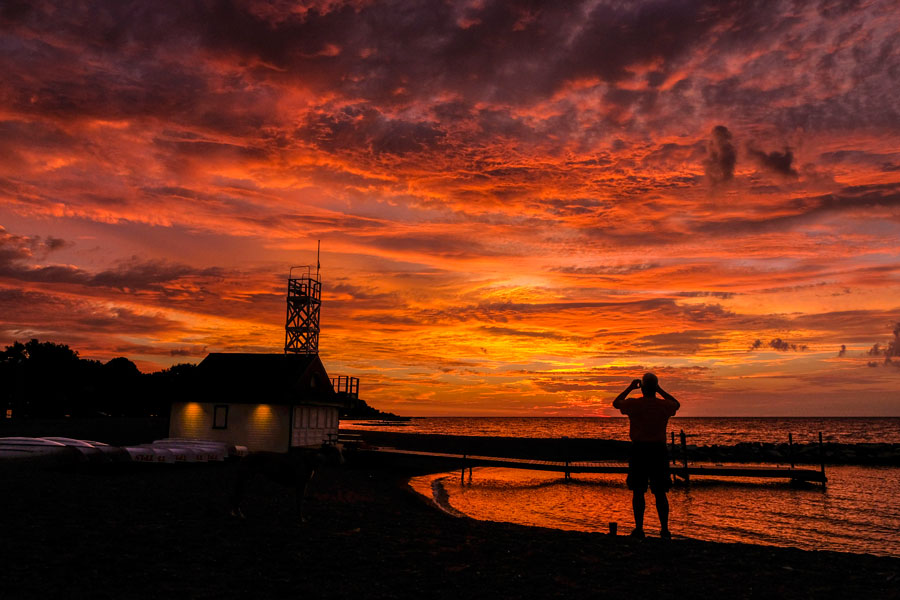 If you happen to be an early riser who enjoys long walks on the beach, you may be lucky enough to run into one of the Beach’s three sunrise snappers.

Erwin Buck, David Cooper and Dale Brazao have seen their status rise in the Beach community thanks in large part to their beautiful sunrise and sunset photography, photography that’s almost as colourful as their personalities.

The three often run into each other on the beach and have developed what Buck refers to as a “friendly rivalry,” with Cooper adding “there’s always these competitive juices going when photographers end up at the same event, so it’s kind of fun. We all win once in awhile.”

Their work has won the hearts of Torontonians and left fans feeling equal parts admiration and envy. But while each of them has refined their sense of style over the years, you might be surprised to learn that not all of them were photographers by trade.

“I’m actually a newcomer to photography,” said Buck. “Believe it or not I was an accountant by trade but I worked in an advertising agency so I was always surrounded by creative people. I tried to take over a creative post many, many times and they just said, ‘Get away from here,’” he chuckled.

Cooper and Brazao on the other hand, are what many would call seasoned pros. Both are recently retired from the Toronto Star after long and successful careers in journalism. Brazao, however, admitted he “fell into picture-taking by accident.”

He was initially hired as a reporter but two years into his career was offered the opportunity to become what was called a ‘two-way,’ more commonly known now as a reporter/photographer.

“On my first day on the job as a two-way probation, the city editor handed me a broken down Nikon F camera left behind by the guy they had recently fired, and told me to go out and show them what I could do. I came back four hours later with both the front page and the Metro page pictures. I never put the camera down again,” he said.

Cooper explained that he was always interested in film, but didn’t necessarily plan to become a photographer. A graduate of the Fine Arts Film program at York University, he said “my film instructors always used to tell me I thought in still images. So I worked for the university newspaper there and I took a picture that I sold to the Toronto Telegram, and then I started freelancing for them.”

Having such a long history in photojournalism, Cooper and Brazao have a few stories in their back pockets – tales of everything from plane crashes, fires, and shootings, to ballets and baseball games.

Cooper said the highlight of his career was shooting “the Blue Jay’s world series back in ‘92, ‘93 and that was done in film. So that’s a highlight.”

Brazao shared that he “won two National Newspaper Awards for reporting and those were special.”

“One of those National Newspaper Awards was for reporting with a colleague on the police shooting of a black teenager in Mississauga, gunned down in a stolen car while driving away from police. The ensuing public uproar led to the setting up of an independent agency to investigate and adjudicate allegations of police wrongdoing. The other NNA was for exposing as a hoaxter a woman who said she was dying of cancer. [She] claimed she was mugged and robbed of her last $10 while on her way to put her son on a bus to go and live with her father out west. The woman was not dying. She did not have cancer. Police raised $100,000 for her without checking her story. She was a percodan addict who made up the whole story,” he said.

But for all three, capturing the Beach neighbourhood is easily one of their favourite pastimes. Buck and Cooper both laughed while admitting that shooting the sunrises helps get them up in the morning.

“The sunrises and sunsets…they’re never the same,” said Buck. “They’re always different and the mood along the waterfront changes so much over the course of the year between winter and fall it’s… it’s almost magic down there most of the time.”

Buck said his favourite Beach landmark to shoot is the Leuty lifeguard station. When he gets bored though, he travels down to “the waterworks. I go down to the boardwalk or I go down to Secret Beach like I did this morning.”

Quickly thwarting my attempts at getting him to share the location of ‘Secret Beach’ on record, he laughed stating, “Well I can’t tell you. If I told you I’d have to kill you.”

So the secret beach will remain as such, but lucky for us the trio were willing to share some secrets of the trade.

They admitted that while most of their editing involves getting the composition right, when it comes to the overall picture there are some digital enhancements at play. Buck shared that he enjoys “taking an ordinary picture and making it extraordinary through digital photo effects.”

Cooper agreed adding, “editing is half the work. And of course cropping and composing. I compose as I shoot but then once you get it on your computer you can fine tune it.”

The secret of being a professional, he said, is that you only show a few good ones.

“I might shoot 500 frames in a morning and then I edit it down to two or three. It’s the sort of normal process. You know, amateurs show you all their great pictures. Professionals show you only a few good ones,” said Cooper.

A truly great photo, Brazao said “is one that needs no caption…it speaks for itself.”

If you’re wondering which camera to buy in order to capture the same quality shots as this trio, Cooper has a simple answer.

“The best camera in the world is the one you’re holding when you see a picture,” he said.

As if to prove his point, each one of them admits they use a different type of equipment. Buck uses a Nikon, Cooper uses a Fuji XT2 while Brazao snaps his shots with a Canon.

Their real focus is not on what they use but how they tell a story through their lens.

And despite putting their years of professional photography behind them, Beachers can rest easy knowing none of the three have any plans to stop snapping the sunrise and sunset anytime soon.

“I’m going back out to the street and hope to stumble on another picture,” said Brazao. “At this stage of my life, you can never have too many sunrises.”