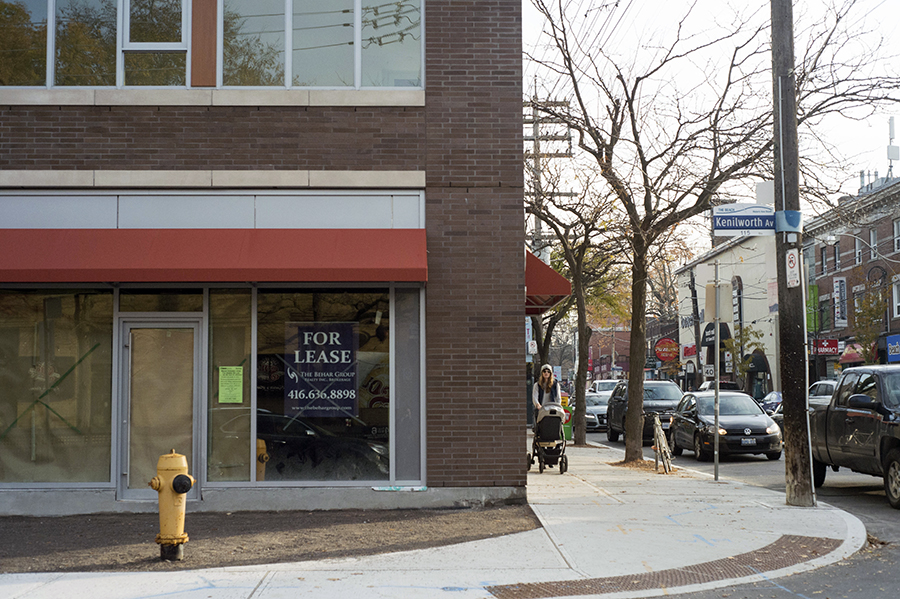 As the development at the former Licks’ restaurant site was proposed and eventually approved, opponents argued that the six-storey condo and retail space would set a precedent in the neighbourhood.

And it might do just that – at least when it comes to the rules for restaurants along Queen Street East.

That’s because the development at the northeast corner of Queen and Kenilworth could soon be home to two restaurants, one of which could be up to 250 square metres in size – larger than the neighbourhood’s bylaws currently allow – following a decision by the city’s committee of adjustment late last month.

The decision came after a push from ward 32 councillor Mary-Margaret McMahon and a number of business owners and residents eager to see Queen Street’s restaurant rules updated – the bylaws in question were written in 1985 in response to a community concerned that the waterfront community could lose some of its charm if larger chain restaurants and patios took over the main street.

The current restrictions on new restaurants state they can be no larger than 165 square metres, the smallest in the city. Restaurants over 100 square metres are required to have a parking space. McMahon said the rules have been acting as a deterrent to new businesses.

Residents “want storefronts filled and they want more restaurants – more good restaurants,” she said. “The trend is towards larger restaurants, with big open kitchens, a fire pit … This is what I’m hearing from restaurateurs in the West End who have wanted to come east over the years, and they’re saying, ‘No way, not with those restrictions, or not without a patio, not with those rents.’”

As such, McMahon has been aiming to have Queen Street’s restaurant bylaws updated.

After a discussion that started a number of years ago, the city began a study of Queen Street’s restaurant bylaws earlier this year. There was a public information session in March, but a report with recommendations appears to have stalled, with city staff noting it is flagged as a priority for the first quarter in 2017.

McMahon hopes that city planners will note the support for – and committee of adjustment approval of – the Queen and Kenilworth application and get cracking on the report and further study.

“Had the restaurant study been done, (the applicant) wouldn’t have had to go to [committee of adjustment],” she said. “But planning is bogged down with a lot of applications for the high-rise condos downtown, so they’re telling me next year. In the meantime, the applicants … supposedly have a tenant interested and they want to fill their empty storefront. And so do I. I want to fill the empty storefronts down here.”

She does not want all of the potential restaurateurs to have to go to the committee of adjustment, noting the time, money and uncertainty involved in that process, particularly considering the restaurant bylaws are in the process of being updated and could be changed by the time an applicant arrives at their committee of adjustment hearing.

“It’s just extra red tape,” she said. She understands the pressures planning is under but updating the restaurant bylaws “is important to the Beach, it’s important to Queen Street.”

With regards to the Queen and Kenilworth application, the committee agreed to two minor variances for the mixed-use building. The first, that the ground floor could hold two restaurants and/or take-out restaurants up to 250 square metres large. The square footage of the building means that one would likely be closer to 250 square metres and the other smaller, or both would be around 200 square metres. The second, that they would not need to provide new parking spaces.

In its application, consulting group Hunter and Associates, on behalf of owner Reserve Properties, noted that the Queen and Kenilworth corner is home to larger restaurants (The Stone Lion, St. Louis Bar and Grill) that were grandfathered in before the 1985 restrictions, and that the Licks’ hamburger restaurant that occupied the space for years did not provide parking spaces. Any restaurant would still need to apply for a liquor license and follow that process.

City staff said in their submission that the application is “premature” and should be refused. They would like the developer to defer until early 2017 when the restaurant study is completed.

Staff did note that if the application was approved, they would like to see the applicant “propose conditions that would mitigate the main concerns related to restaurant uses on Queen Street East.” Those concerns are “related to noise, solid waste, traffic congestion and disruptive behaviour.”

Letters of support were wide-ranging in their reasons. Some noted that the current bylaws encourage small, standing room only fast-food restaurants, that Beach residents often travel to Leslieville when they could be afforded more dining options to support the neighbourhood. Many noted the importance of encouraging businesses to fill the empty storefronts on Queen Street East.

Resident Jeanne Dykstra wrote in her submission, “The blight of vacancies has become a depressing sight and we need to do everything reasonable to remedy the situation. I understand our size restrictions are the lowest in the city – and I am aware that too great an expansion would be harmful to the small-town character of our community. However, this small-town character developed decades ago, long before 1985 when these dimension restrictions were imposed.”