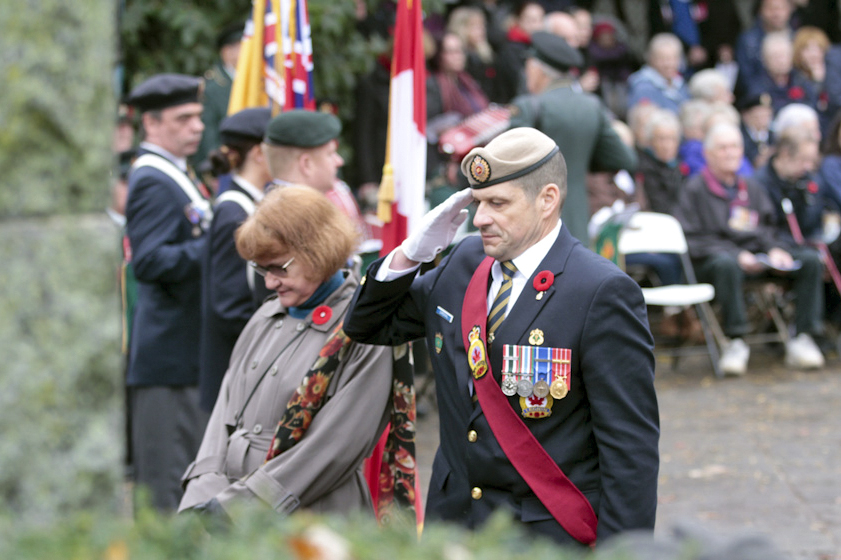 A long-time Beacher who died a few years ago – she would have been 100 – was named after the battle. One of her uncles was in it; he lost a leg. Her name was Edna “Somme” Houston.

Seventy years ago, a monument was built in Kew Gardens to honour all of our fallen soldiers. This year, at our November 11 ceremony, another inscription will be etched in stone, to remember our Canadian heroes. Many in the Beach helped the war effort during WWI. Mrs. Jessie Cunningham of 2337 Queen Street East had a boarding house. In that boarding house 20 young men went to war, including her son.

A father and son went off to war at different times. During the battle of Passchendaele, the father William Barnes met his son William Jr. Barnes. They lived at 32 Wheeler Street.

Even though the battles ended on November 11, the actual celebration began at American Thanksgiving on the third Thursday in November, by which time many soldiers had returned home.

The Beach celebrated before and after the armistice on Queen Street. Private Neville Young who lived at Osborne and Lyall and was gassed at Ypres returned home.

Mrs. Sarah Morris, a victim of the Halifax explosion, was brought to Toronto by her daughter Amy Morris. Sarah was in great pain for a year before dying in her daughter’s home at 2 Kenilworth Ave. in 1918.

Mrs. Niron of the East End had five sons that went overseas to fight for their country. A blind soldier, Lance Viets of the Princess Pats told a Beach audience at the Beaches Masonic Temple: Don’t feel sorry for us, we’re doing our duty. We can do different tasks – massages, basket weaving, telephone operator, sports, etc. We want a practical chance, not sympathy.

Private H. Bell of 70 Lyall Ave. was one of 37 relatives to go to WWI. Private Gordon Burns enlists at 14 years of age. He went to Europe at 15, was never injured, and returned safe. He lived at 148 Woodbine Ave.

Remembrance Day ceremonies on Friday, November 11 begin with a march to Kew Gardens from Corpus Christi Church at 16 Lockwood Road. The 11 a.m. Kew Gardens ceremony is followed by a lunch at the legion on Coxwell Avenue. Later in the afternoon, the Naval Club is hosting, with an afternoon of music set between 4 p.m. and 6 p.m.

Well it took a long time, but the War Memorial in Kew Gardens has finally been updated just in time for Remembrance Day 2016.

The inscription that has been added was written to be inclusive of everyone who served Canada in past, current and future missions.

Thanks to the City of Toronto and to Mary-Margaret McMahon for doing this and to everyone who supported me and Gene Domagala who advocated for it..

Please search your local communities for out-of-date War Memorials and bring it to the attention of your local Royal Canadian Legion Branch whose job is Remembrance.