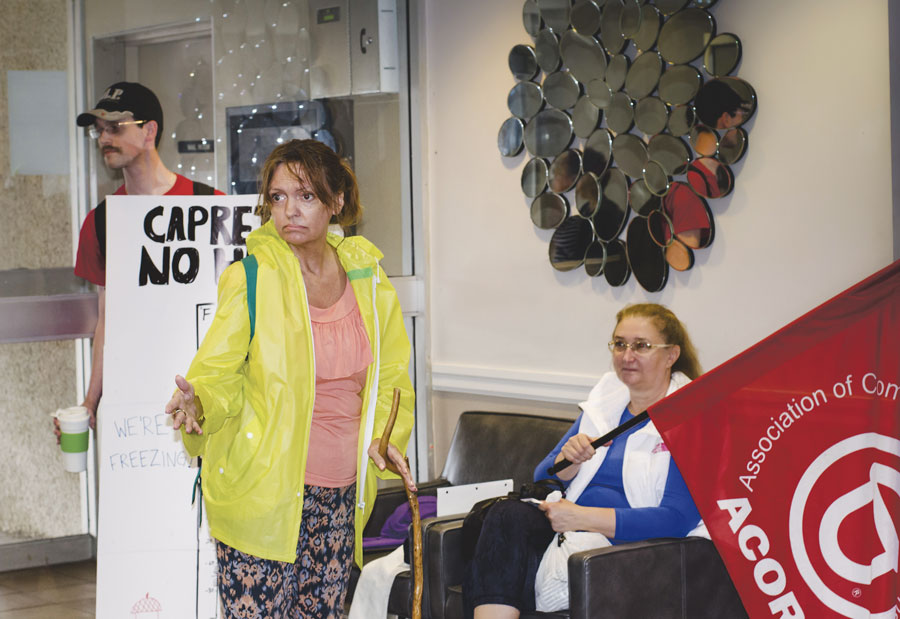 It may seem ironic that a group of East End apartment tenants gathered to protest poor heating in their building on October 18 – a day that was arguably the warmest of the fall.

But standing in the tension-filled lobby of 75 Eastdale Avenue that day, it was clear that complaints of poor heating were only the tip of the iceberg.

The sea of red ACORN (Association of Community Organizations for Reform Now) t-shirts matched the unmistakable anger in the room as members of the organization gathered with tenants amongst them to represent the concerns of the residents in the building.

They were protesting against what they say are unacceptable living conditions in 75 Eastdale Ave. and the townhouses adjacent, also owned by CAPREIT (Canadian Apartment Properties Real Estate Investment Trust).

CAPREIT, a real estate investment trust, is one of the largest residential landlords in Canada. According to their website, they currently own “interests in 48,190 residential units, comprised of 41,747 residential suites.”

On their website, the company lists quality accommodations, respect for their residents, and professional management teams as being top priorities, but the accusations made in the room that day suggested otherwise.

The group had been alerted to the issues at 75 Eastdale because some of their own members are tenants in the building.

One in particular, Sue L. (who declined to have her last name published due to safety concerns), alleges she was attacked in the building.

“I got assaulted twice in this building … And I was also verbally abused, she alleges. “I’ve written letters … they were never evicted.

Among the conditions ACORN is fighting to improve are inadequate heating, cockroaches, lack of security, and lack of accessibility for the disabled, but for many of the tenants living there, these inadequacies don’t even begin to scratch the surface on an issue that they believe is deeply rooted in social injustice.

With many low-income and immigrant families living in the buildings, Ashley Reid, a tenant in the CAPREIT-owned townhouses next to 75 Eastdale believes the experiences of she and her neighbours are indicative of underlying societal and class issues.

Reid further claimed that the conditions of her townhome were uninhabitable from the day she moved in.

“I moved in to find the other residents medications, drug paraphernalia in my unit. [There was] years worth of cat and dog feces that [my daughter] got a hold of and came to me and was like, ‘mama, caca,’” alleges Reid. “And yet they guaranteed me they had a professional cleaner come out.”

According to a recently published State of Repair report by ACORN, these types of complaints are not uncommon in Toronto — and one of the reasons ACORN is pushing for standard landlord licensing in the city.

Landlord licensing would require an annual inspection of all buildings with three or more floors and 10 or more units. The inspections would include common areas, boiler rooms, elevators and electrical rooms, as well as general cleanliness, maintenance, and pest control in individual units. Any landlord that did not pass the inspection would face a large financial punishment.

To further their case the group surveyed 174 people from a low to middle-income demographic and discovered that 68 percent of those surveyed had problems getting even basic repairs done in their buildings.

For their part, CAPREIT did agree to meet with the representatives of ACORN on October 18 after news of a pending protest had materialized, and scheduled a follow-up meeting with the management team for October 27.

Following the most recent meeting, ACORN representative John Anderson said CAPREIT had agreed to rectify many of the issues that were tabled. The list of improvements includes installing automatic doors to improve accessibility, heat sensors to test the temperature levels in each suite and installing security cameras in the building to improve the safety of the residents.

Additionally, ACORN will be meeting with CAPREIT and a pest control company in three weeks time to discuss an effective method to rid the building of cockroaches.

Beach Metro News contacted CAPREIT multiple times for comment on this story but had not heard back at time of publication.

This story has been updated.

I am a current resident of 2 Park Vista another property location of CAPREIT and I am curious as to the outcome of changes made to your living situation. We have poor security and heating issues here in the building and I would love to talk to someone from ACORN further

Someone assaulting someone is not the landlord’s negligence. The LTB is impossible to get evictions with. Stop criticizing landlord’s for the laws the tenant’s fought for. If you want to make it hard for landlord’s to evict people, this is what you get. If she is a member of Acorn she should know how this works.

Roaches? This is a 2-way street. All tenant’s need to be clean and landlord’s need to bring in pest companies. You can’t blame it all on the landlord. Either every tenant co-operates, and the landlord does it’s part or the whole thing fails.

Typical of Ontarian’s. They are always the victim and nothing is ever their fault and they take no ownership of their own lives. The liberal government being there for so many years has created this entitlement nightmare.