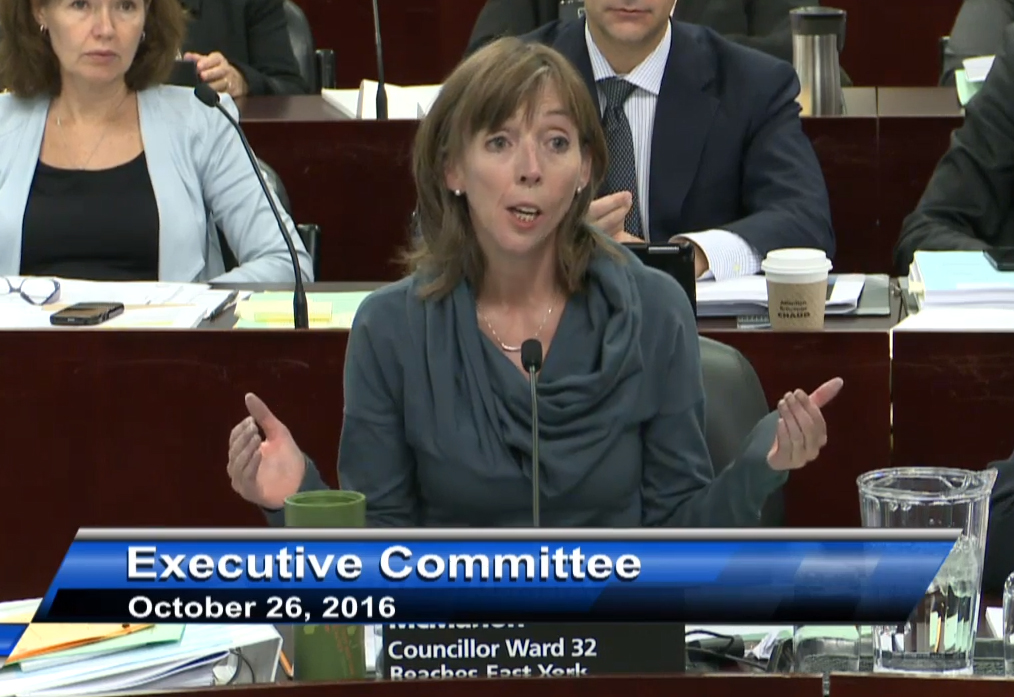 It was a close one, but Beach residents keen to keep their neighbourhood’s boundaries intact caught a win today.

Discussing a consultant report on Toronto’s ward boundaries, Toronto’s executive committee voted 7-6 to recommend that council adopt the consultant-recommended 47-ward option, the option that would add three new wards to the city and make minimal changes to Ward 32’s (and other communities of interest’s) boundaries. Council will now consider the item at its November 8 council meeting.

The committee narrowly voted down a motion (6-7) to adopt the report’s 44 ward option, which would see the number of wards and councillors stay the same but would change the boundaries in several wards, including in the Beach where the proposed boundaries would essentially see Ward 32 split down the middle. A motion to move to 26 wards in order to be consistent with federal and provincial boundaries was also defeated.

The committee was considering a new supplementary report to the final ward boundary review report that was released in May. When that report was tabled, recommending an option with 47 wards, the executive committee asked the team of consultants studying the ward boundaries to go back and consider an option that kept the number of councillors the same, as well as several other tweaked options.

At the time, Mayor John Tory said that people were not in favour of “more politicians”, a stance he reinforced today before his vote for the 44 ward option.

He said the way council runs “is broken” and the city should fix that before fixating on adding more councillors.

“We should have the courage to reform the way we run the city … and then say, in the context of that, how many people should it take to run the city?” he said.

A petition signed by over 600 Beach residents opposing the 44 ward option was presented to council, with petition representative Brian Graff saying he “had no trouble getting names.”

Ward 32 councillor Mary-Margaret McMahon, addressing previous media reports and comments at council suggesting some Beach residents were opposed to the 44 ward option because they did not want to be part of Scarborough, apologized to council and to Scarborough councillors and residents.

“This kind of divisive attitude does not help us build one city and this is not the sentiment of most of my Beachers,” she said.

McMahon voted in favour of the 47 ward option, noting she is not running again but believes in keeping neighbourhoods together and helping councillors in over-populated wards.

To the west of Ward 32, Ward 30 councillor Paula Fletcher was in favour of the 47 ward option. To the east, Ward 36 councillor Gary Crawford, who made a point to note that several streets in his riding have residents who would consider themselves Beachers, moved the motion to adopt the 26 ward option.

The ward boundary review is meant to address the disparity between ward populations and lead to more effective representation while addressing the city’s growing population.

Council will consider the report and committee recommendation at its November 8 meeting. Meanwhile, a number of councillors and staff today made note that, no matter what council decides, there is a high likelihood that the decision will be appealed to the Ontario Municipal Board, making the timeline tight to implement changes for the 2018 election and allowing for further consideration.

*This article has been updated

Wow, Councillor McMahon just can’t resist slamming hundreds of us who chose to speak up about ward boundaries and is not getting the point at all. One person on the street interviewed who gives one opinion (not mine, not most) does not represent Beachers. McMahon votes for 47 wards anyway to ‘keep neighbourhoods together’ which the Beach certainly is and has been for over 125 years!!! That was our point. But she still chooses to insult a good number of us in the process. Sure wish she would listen to all her constituents.

She is on her final term and it is obvious who is setting up to run. Out of the two most likely ones, one of them would be a disaster and the other may do well. MMM will also probably have someone in mind to replace her.

As far as I am concerned she is far better than Jakobek and Bussin was.

Personally I was hoping for less politicians and not more.

Who is set up to run (not so obvious I guess)

All the indicators are there. Just keep reading.