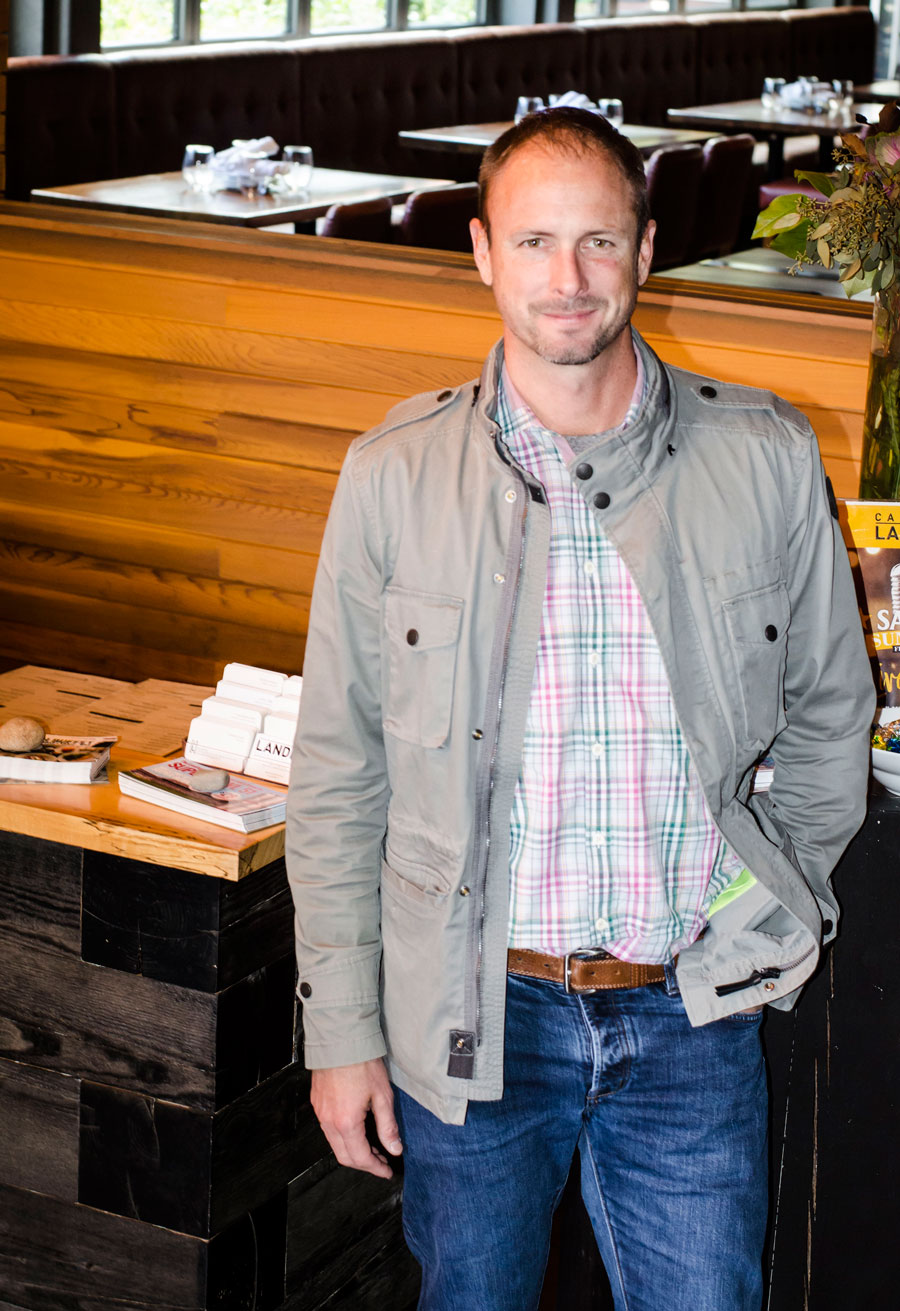 Steve Pelton, CEO of The Landing Group, stands at the front of his newest establishment, Carters Landing. PHOTO: Lara O'Keefe

Like it or not, Carters Landing has officially landed in the Beach.

And Landing Group CEO Steve Pelton – co-founder of Carters Landing – wants residents to know they’re not the chain restaurant some may think they are.

The October 5 Toronto city council meeting shelved at least one of the ongoing Tuggs Inc. debates with a vote in favour of a lease transfer to Cara Operations Ltd., the chain restaurant corporation that owns Carters Landing and other Landing Group restaurants. Tuggs Inc. is the company which, in 2007, was given an exclusive 20-year-lease to several city-owned waterfront park properties and buildings.

Carters Landing, which is located on Lakeshore Boulevard in the former Boardwalk Café location, has been under intense scrutiny since it opened in July, around the same time Tuggs requested the lease reassignment from the city, with some residents calling for a ‘boycott’.

Now that the assignment is official, Pelton wants to tell his side of the story.

“I think people need to know a little bit more about who we are and what we’re trying to do,” he said in a conversation over the phone. “I live in the Beach, so I’m very proud to be a part of the Beach as a resident and I just want everyone to know that it’s not so much a big conglomerate, but me and my partners that were trying to establish ourselves in the Beach and that area long before Cara bought our little restaurant group.”

Pelton said he moved to the Beach in 2008 at the same time he and his partners bought Joy Bistro in Leslieville. He then started The Landing Group in 2010 with three close friends; all four of whom are from Toronto.

Their restaurant concept, described on the website as premium casual, performed so well that by 2014, it had caught the attention of Cara Operations Ltd., Canada’s largest full-service restaurant company (Cara owns Milestones, Swiss Chalet, Bier Market, and Casey’s, among others), who then acquired 55 per cent interest. By June 2015, Cara had announced completion of a full acquisition.

At the time, the group consisted of three restaurants: Williams Landing in Liberty Village, Hunters Landing in CityPlace, and Harpers Landing in Oakville. Under the Cara umbrella, it has now grown to seven locations across Ontario.

Pelton insisted however, that despite the 2015 Cara acquisition, The Landing Group is still run separately. “We do our own thing,” he said. “We were fortunate enough that our restaurants were very successful so they didn’t want to mess with that. They wanted to leave the essence of what the Landings were, which is four Toronto guys running Toronto restaurants, basically.”

The Landing Group designs each restaurant with the community in mind, stressed Pelton, who explained that the group carefully plans everything from the restaurant itself, to the menu, musical offerings, and hours of operation around “what the community really wants.”

Pelton said he had his eye on the Boardwalk Café location for some time, scoping it out for years during his runs along the boardwalk. So when Tuggs owner and city leaseholder George Foulidis approached him about putting a Landing Group restaurant in the Lakeshore Boulevard space about a year-and-a-half ago, he was thrilled.

According to Pelton, Foulidis had approached them through a mutual acquaintance, assuring them he would be able to obtain city permission to assign the lease before July 1.

He said that although it wasn’t his preference, the agreement clearly stated Foulidis could run Carters Landing as his affiliate in the interim. With this in mind and with what seemed to be a good possibility of securing a place as tenants of the city in the near future, Pelton and his partners moved forward with the deal.

It wasn’t long, however, before the group began to experience backlash spawning from the original Tuggs Inc. deal.

“There’s [been] a lot of noise around this and unfortunately it’s negative noise and we want to get past this,” said Pelton.

He adds that even though he is a business owner, he is first and foremost a Beach resident, and says he wouldn’t do anything to the space without getting feedback from the community.

“Just the same way we look at what’s on our menu, we take our feedback from the people who come through the doors. Mind you,” he noted, “we don’t have a say in what goes into the Tim Hortons or where the Athens is.”

And with regard to the parklands and sponsorship rights debate – Tuggs continues to maintain exclusive rights to the eastern beach properties, though Ward 32 councillor Mary Margaret McMahon did pass a motion at council to try to reclaim those rights – Pelton said his hope is “that whoever has it, whether it’s the city or Tuggs, they just do what’s right for the Beach. They allow for as many charitable activities as possible, they allow for big events that are important to the community.”

As for Carters Landing, Pelton feels strongly that even though it’s not a traditional mom and pop shop, they’re “a lot closer to being that than [people] realize.” Reiterating again that the company is just four guys from Toronto, but with the added stability of being backed by a large corporation. Meaning, “we’re not gonna close the doors if we have a bad winter,” he said.

Pelton and his partners are eager to separate themselves from the Tuggs Inc. deal.

“That happened in 2007, which we had nothing to do with,” he said, noting that “if we’re in front of the press [I hope] it’s because we’re holding a great event, or a charity drive, or we’ll sponsor some volleyball tournaments or whatever. We sincerely want to do what’s best for the Beach within our restaurant.”

Here is some feedback from a lifelong Beach resident. I ate at Taylor’s Landing at the Shops at Don Mills a couple of weeks ago (my business partner booked it for a business meeting). The food and service were both below average for the price point and the ambience was lacking as well – it’s basically a glorified sports bar. Adding that to your involvement in Foulidis’ shady dealings, I will be continuing my years long boycott of the facilities at Woodbine Beach. You profess to be community minded but it is apparent that your sole motivation is profit.

it was a considerable piece on this thread

We have been Beach residents for over 30 years, transplanted from the bountiful waterfront restaurants of Vancouver and we regularly eat out locally. We couldn’t find anything comparable in Toronto the 30 years we’ve been here!
Carter’s Landing is the BEST restaurant in the Beaches waterfront location ever! For over 30 years we’ve eaten at the various divey, dirty sports bars at this location previously, with staff that would scowl and ignore you. Then there was that horribly over-priced with regrettable food from the restarauant there previously – with a huge plastic flower centrepiece – that closed for a reason!
We now go out weekly to yes, a sophisticated sports bar, with EXCEPTIONAL service. Our daughter recognizes the level and quality of training the wait staff have received – on par with the legendary Earl’s for service. And the FOOD! Phenomenal fresh salads, and amazing vegetarian options! Happy to hear they’re staying, -as it is our now our weekly go-to Friday night location!
I dare the Beach Metro News to print an actual letter of support!

“The legendary Earl’s”?! Holding up another mediocre chain restaurant with questionable human resources practices as the gold standard leads me to immediately dismiss your recommendation.

Earls restaurants are the standard bearer for providing extensive training for their wait staff – similar to Starbucks. Young people looking for serving jobs that have “Earls” on their resume ensures being hired anywhere. The food at Earls I know nothing about. I agree, you should absolutely dismiss my recommendation and not go.

Funny thing. We have gone from the issues of this lease to restaurant reviews. Wow

It’s about the lease not the food. Its about the jurisdiction, not the one location.

It’s about the lease not the food. Its about the jurisdiction, not the one location.

If you “want to get past this,” do something positive for the community. Hold a fundraiser for a local charity, provide snacks for a group, sponsor a team, sponsor an event (lots of possibilities ar local schools and during the holiday season). Give out some coupons to encourage us to visit.

Show us you’re part of the Beach, don’t just talk about it.