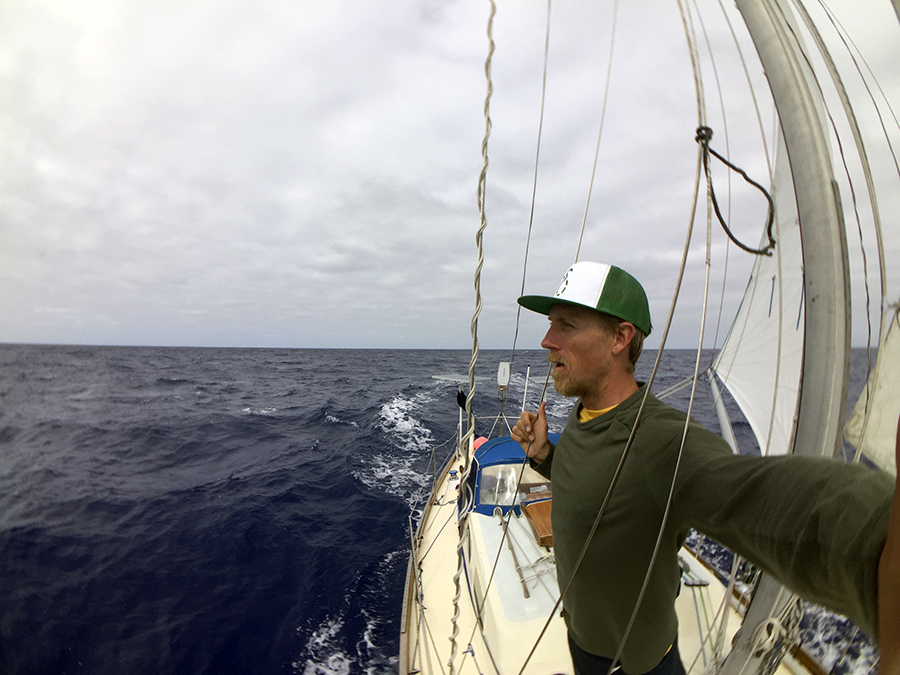 Beacher Markus Pukonen is travelling around the world without the use of any motorized vehicles. PHOTO: Routes of Change

One year into his five-year journey to circumnavigate the world without a motor, Markus Pukonen has had his share of scary moments.

Take the time he was rafting down an icy river, with no one around for miles. Already a harrowing experience, his situation intensified as he turned a bend and saw an ice dam stretching completely across his path. The water was disappearing under the dam and, without seeing a clear escape, he worried that he might disappear under the dam, too.

“I rowed upstream as fast as I could, but I wasn’t moving anywhere,” said Pukonen. “So I did the only thing I could and rammed the raft onto an ice shelf at the bank of the river.”

Not knowing how strong the ice was, he delicately and deftly as possible scampered to the shore.

That’s just one of dozens of wild experiences Pukonen has had over the last year travelling across North America, the first leg of his five-year journey to travel the world without using a motor. He’s raising money and awareness for his charity Routes of Change, an initiative which aims to give money to several environmental charities and inspire people to challenge the status quo. He’s had to think fast, plan in advance (but allow for flexibility), and rely on the kindness of strangers and new friends.

The documentary filmmaker’s 82,000 km motorless journey began in July of 2015 when he launched a canoe into the water in front of the Balmy Beach Club in front of dozens of supporters. He pogosticked 10 km across Winnipeg, cycled 1000 km on a recumbent tricycle – which he said was unexpectedly uncomfortable to travel such a long distance in – and ski-toured 800 km through several mountain ranges in Alberta and B.C.

The ski-tour trip proved challenging. He had little experience with skiing and winter camping – his previous adventure trips involved water – and realized on his first day traversing the Rocky Mountains that his three-day trip would take longer and burn more calories than he’d anticipated. But he stretched out his food, making it last until the final hours of the trek, and made it through the deep, fresh, unpacked snow without injury.

“I didn’t exactly run out of food while ski-touring, but I did eat everything I had,” he said. “Lesson was that I need to carry a pound of butter with me while skiing.”

While backcountry skiing might sound like the most stressful ski trip, Pukonen said one of his most nerve-wracking experiences was on a ski hill in Canmore with his family. Motorless means motorless – no escalators, no elevators, and certainly no ski lifts – so he was skinning up the hill with his brother in order to ski down. The ski patrol stopped them and said that they needed to get on a snowmobile to be escorted off the mountain – they were breaking the rules skinning up the hill.

Pukonen said he told them about his initiative and that he can’t travel by motor.

“They thought I was lying and said that if I didn’t get on the chair lift or snowmobile, they were going to call the police,” he said, noting that was the scariest moment of the trip for him, thinking that he would have to go on the run from the cops.

Luckily, the cops looked up his website, saw that he was legitimate, and let him skin back up to the village where his family was staying.

After the Rockies, he made his way to the coast of B.C., where his friends and family in Tofino cheered him on as he set sail on the Pacific Ocean. He crossed the ocean with a friend on a sailboat, docking in Hawaii, where he has been for the last several months – marooned there longer than he expected, trying to find a motor-free boat to ferry him to Asia.

“The person I sailed with was intending to continue on solo to Micronesia and did not have a solid plan,” he said. “It’s a small boat and he wanted the freedom to go where he wanted when he wanted. I was planning on finding a boat to crew on with a different captain or buy a cheap boat myself and continue on solo.”

Luckily, he’s made good friends in Hawaii and hasn’t wanted for a place to stay.

“The folks I’m staying with right now have been amazing. They are a 75-year-old couple who are very young at heart,” he said. “They are both still working and he can bicycle better and faster than all of my friends half his age. I’ve been here longer than expected in search of a boat and they’ve been wonderful.”

But unexpected works both ways.

“In a turn of events the guy I sailed with returned to Hawaii and has decided to lend me his boat – in return for work and improvements done to the boat – for the next 5-6 months in order to sail to Hong Kong,” he said. “I will likely be setting sail in mid-September to the Marshall Islands and then eventually make my way through Micronesia and the Philippines to Hong Kong in early spring.”

A filmmaker by trade, Pukonen has been documenting his travels extensively, posting photographs, videos, and blogposts to his website and social media channels. And with four years and 75,000 kilometres to go, there is plenty of the world to document left.

But while Pukonen moves farther away from the Beach, distance-wise, the neighbourhood he grew up in is never far from his heart.

“I’d love to give giant hugs and thanks to all my Beaches friends and family who were there to send me off and big love to those who couldn’t make it but that I know are with me on this journey,” he said. “Having the support of the Beaches community helps me find the motivation to continue around the planet inspiring change. It’s not about the destination but I feel blessed to have a great community to return to.”