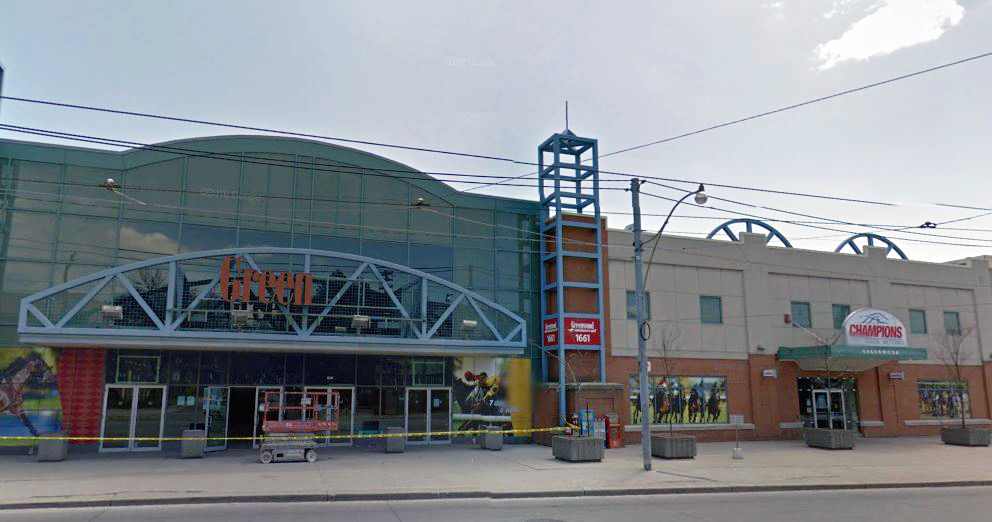 The Greenwood Raceway site, shown in this Google image taken during renovations in May 2014, could be home to a new concert venue. PHOTO: Google Maps

Entertainment giant Live Nation is behind the application, currently before the city and with a hearing scheduled for July 27, according to proposal documents. Planning consultants Bousfelds Inc. submitted the application for interior renovations to the city on behalf of the building’s owners, EMM Financial Corp.

The site is currently home to the Alliance Cinema, the Champions Teletheatre off-track betting facility, and System Fitness. The building was erected in the mid-90s after the historic horse racing facility on site was demolished.

The proposal details plans to renovate two-thirds of the teletheatre, located in the middle of the property, in order to host live performances. A new partial second floor would be constructed, and changes to the outside of the building would be minor “maintaining a consistent built form along Queen Street.” The venue would host approximately 150 shows a year.

The plans appear to show that the current off-track betting facility at the site, Champions Greenwood, will remain a tenant – albeit with a smaller floor space.

What do you think about these plans? Have your say in the comments.

This would have been a great site for the YMCA… but our City’s planners allowed it to be built in a section of Kingston Rd where it is hard to get to via transit, and where the developers used the inclusion of they to get extra height and density.

What impacts will this have on parking, noise/vibration and on rowdiness? If this project is refused, what other uses might go into the space? The real question is always what guarantees will there be to ensure that any answers the neighbours get to these questions are in fact followed and enforced by the City and by police etc.

To often promises are made and not kept, or City Hall is asleep at the switch – like on Tuggs/Boardwalk Cafe.

We already have the concerts and various festivals on a seemingly weekly basis in Woodbine Park which is directly behind this proposed venue. The noise and congestion it brings into the neighbourhood is problematic. This venue will only make it worse. I appreciate the desire to bring venue into the beach but it shouldn’t be at the expense of nearby residents loosing the enjoyment and possible value in their homes. I say nay nay

The residents were NOT consulted. McMachon is fabricating AGAIN. I live right down the street and no letter was sent out…AGAIN. McMahon should be fired. She continues to state that residents have been consulted regarding development venues. The CBC has a story today where she states that she consulted us and we are for it! And that we need to liven up the neighbourhood!? Really…there is a festival EVEY weekend at Woodbine park during the summer. There are a tons of tourists here and throughout the neighbourhood all the time. Has the city thought about the traffic congestion 2,700 cars arriving and departing at the same time will cause. Or the amount of police we will need when Division 55 just announced its amalgamation with another Division. And what about parking? This riding continues to hand out permits for spots that don’t exist and to those who have actual proper driveways, now this? And getting east of Woodbine during these traffic jams…forget about it. It will be like Jazz Fest every other day.

How much money are you and Planning Officer pocketing Ms McMahon?? You are the only two who support this and yet you say you’ve consulted residents. Tired of her corruption. Mayor Tory….you’ve got an employee not fulfilling her mandate to represent residents’ opinions (and not hers alone). In the real world, an employee who doesn’t fulfill their responsibilities gets fired. Mayor Tory….are you listening? Councillor McMahon isn’t listening…

As a homeowner who resides directly across the street from this venue, I think it is a terrible idea and don’t welcome the additional patrons, traffic and noise.