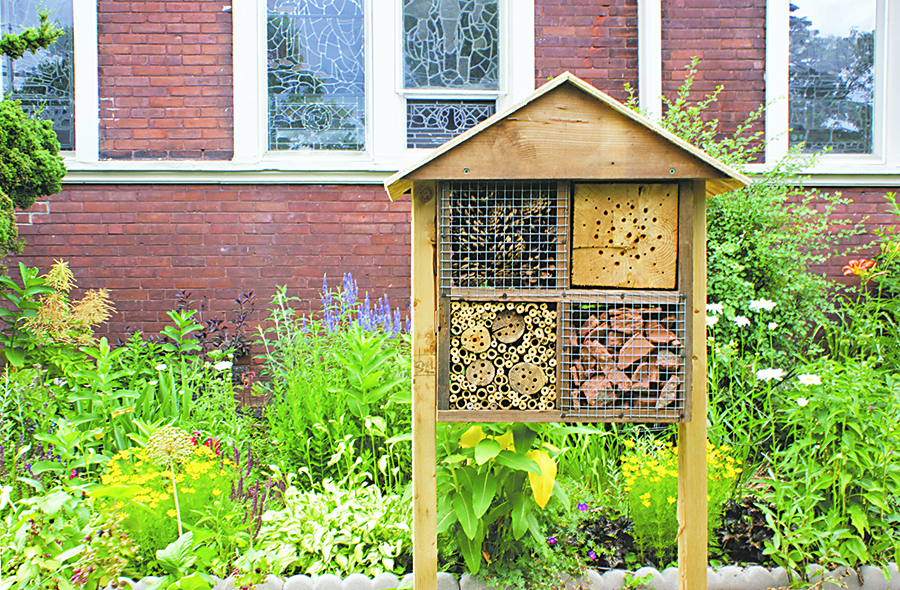 Pollinator hotels are a fixture outside of St. Saviour's Anglican Church on Swanwick and Kimberley. "Our gardener and next door neighbour installed them this year. The pollinator palaces are meant to attract honey bees, lacewings, ladybugs etc. It gives them a place to stay over the winter," wrote pastor Shelley McVea. PHOTO: Anna Killen

First, she learned that a woman on her baseball team kept bees. Then she attended an Open Doors Toronto event and met a local veteran beekeeper. Soon, she found herself at an Ontario Beekeepers workshop, where she met a community of supportive bee aficionados.

And before she knew it, she had her first hive.

“It was one of those things,” said Davis, a teacher at Bowmore Public School who has been keeping bees in the Scarborough Bluffs neighbourhood for four years. “I really love nature, I’m always watching the birds and the bees, and I’ve always been really interested in that… I just thought that I’d really like to [keep bees].”

Beekeeping is more than a hobby. It is a big responsibility, like caring for any animal, said Davis.

It’s also a crucial part of the ecosystem. Providing bees, and other pollinators, with healthy places to live helps maintain and improve their population, important after several years of devastating declines.

And recently, the “Let it Bee” public outreach campaign called for improved pollinator biodiversity, citing a decline in wild bee species, particularly in southern Ontario. The campaign highlighted ways cities and citizens could change the ways they garden and landscape to protect wild bees and help native bees, plants and crops flourish.

Davis said that keeping bees has helped her become more aware of the roles pollinators play.

“It brings you to a new level of appreciating your surroundings,” she said. “As they bring in little ‘baskets’ of multi-coloured pollen, you look around and try to figure out what they are pollinating. The colours of pollen are tremendously variable – white, yellow, blue, purple, red… You look around and see flowers, trees and bushes in a new light.”

The experience is rewarding and enlightening. “Bee keeping is a very zen experience,” she said. “One of my many mentors suggested ‘you have to learn to move like water’ when handling bees.”

Davis is learning to make beeswax candles and body lotion, and recently opened her hive’s box to find it full of honey for the first time. That’s right – after four years of trial, error and inventive problem-solving, she’s only taken a small portion of honey from her bees. Anyone who gets into beekeeping for the money or the honey will soon have a reality check.

“I’ve taken one frame of honey,” she said. “The first year, I didn’t take any honey but they starved – they didn’t have enough honey, so that year they died. The second year, they made honey but I didn’t want to take any because they starved (the first year) so I left the honey, and they made it through the winter. And my third summer, I took a little bit of honey, one frame. And this year I might take more, but you just want the bees to survive and thrive, and then maybe over time…”

Keeping bees is a lesson in creative troubleshooting. As a beginner beekeeper, Davis has been learning how to improve her bee’s hive-life so they can produce more honey and live comfortable lives, as well as make the process work for her – she’s currently experimenting with different types of boxes to find a design that will be easier for her to lift when it is heavy with honey. And different hives have different temperaments – some bees sting more than others.

Davis says the support she receives from the Urban Toronto Beekeepers has been extremely beneficial.

“I’m a pretty new beekeeper. But within the bee community – if you ever want to come to one of the meetings, first Tuesday of every month – it’s just really wonderful, warm people that care a lot about bees, have a lot of knowledge, and support each other,” she said. The meetups are open to anyone, of any level, and happen year-round.

She also says it helps to have a friend to share the expense and the responsibility with. She spent a morning several weeks ago with her bee partner, learning how to test the hives for Varroa mites – tiny bugs that latch onto and bug bees, causing major problems.

It’s also important to be aware of your neighbours and find a good spot for the hive. In Toronto, there are backyard hives, rooftop hives, hives on Toronto Island and other public places.

“The main thing is finding a place,” she said. “A lot of people I believe have hives in their backyard, they just talk to their neighbours. The bees are not very present, they’re very busy. They come out of their hive and they go up and out, and it’s really just right at the hive that you see the bees.”

But if you ever find yourself close to a hive, make sure to take a careful, close look.

“You know they dance, right? The reason they dance is to tell the other bees when they’ve found some really lovely nectar,” she said. “They do it by the direction of the sun, the shape of their figure eight is the angle to relay the direction of the sun, the speed at which they move is how exciting the find is, and the number of steps… it’s like their own little GPS to direct the other bees. It can be as far away as two kilometres, but the directions are to that exact spot where they are going to find this delicious thing.”

how can you find out how to build one of these? we want to but need to know how to build it or buy it and it is a matter of money when buying one already built, can we get the dimensions and directions of what you put inside?