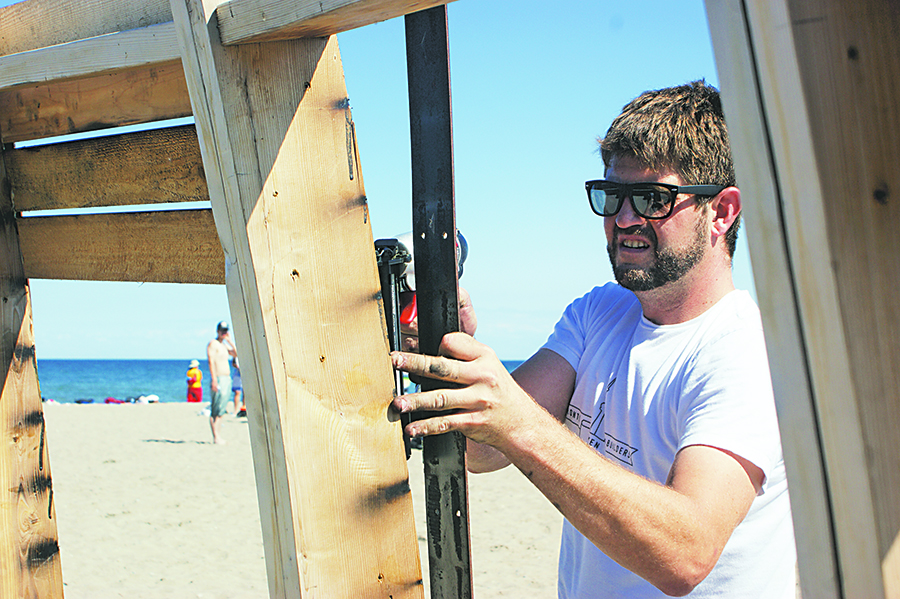 A local contractor has restored and reinforced the Woodbine Beach community fireplace – a piece of public art designed by renowned architect Douglas Cardinal which has been repeatedly vandalized over the last several months.

Unveiled during this year’s Winter Stations, “The Fire Place” is a curved cedar structure that acts as a shield from the wind and provides seating around a community fireplace.

The fireplace was intended to be fully accessible to the public. But earlier this year, after vandals tore off pieces of cedar from the artwork and burned them in the fire pit, Friends of Beaches Parks, the group in charge of the project, decided to lock the metal fire cage.

That didn’t stop people from continuing to pull off strips of cedar and burn them beside the fire pit, nor from defacing the inside of the structure with graffiti.

By the end of June, nearly half of the installation was gone and the community group enlisted the help of a local contractor to repair the damage.

Toronto Beach Rotary provided a grant to cover the cost of the reconstruction, while Danforth Lumber supplied the cedar at a discounted cost.

“I’ve been a contractor for many years, I grew up in the Beaches, so I obviously wanted to give something back and help out where I can, so this was a great opportunity for that,” said Scott Mifflin of Toronto Green Builders.

He said it took him two or three full days of work to source, prepare, and install the new cedar panels, which he charred in a way that honoured Cardinal’s intention, using the Japanese burning technique called Shou-Sugi-Ban.

“I did a little bit of research – a Japanese architect has developed a really modern technique of doing it, but it actually involves tying them together, lighting a fire, and letting them burn. It’s a real process. That’s what a lot of people do,” he said.

“This was more of an adaptation of that, because I obviously don’t have time, or a place to safely burn the wood like that, so I had to come up with another technique,” he said, explaining that he used a propane torch to burn the wood through from above.

Once the wood was ready, he and builder Mike Rousseau brought their supplies down to the beach and got to work installing the new panels.

They also nailed and glued more vertical strips along the structure so that it would be more difficult to kick the panels in.

“Just to give it a bit more strength,” he said.

Mifflin has worked on many restoration projects, but none in public in the middle of the beach. The team drove their truck out to the structure and were using small generators to power their tools.

“It was a unique experience, definitely,” he said.

He said he hopes that people start showing the artwork some respect – and appreciate that they have a place for a fire on the beach. Friends of Beaches Parks is encouraging people to bring their own wood to the fire pit – and leave wood for others to burn.

“Growing up here, you’d always want to have a fire on the beach here but you never could,” said Mifflin. “So now you have this and hopefully if people use this and respect it properly, then it should be something that people can enjoy for a long time.

“I don’t know who is doing it, obviously young kids get up to whatever mischief they’re going to get up to,” he said.

“You can come out here and have a fire with your friends, so maybe just bring your own wood, don’t destroy the thing that people obviously took a lot of time and care to build.”

A solution to the wilful destruction of public property is to catch the offender(s) and sue them civilly. If the offender(s) happen to be young, the parents may be held accountable to pay the expenses associated with the repair, clean-up and restoration. My bet is, when the parents start to pay, things will change. In the case of this community fire pit, I suppose the City would have to pursue the offender(s) and my experience has taught me that the City never bothers. This of course is naturally predicated on the police apprehending the offender(s) and sharing that information with the offended and that doesn’t seem to happen much either.

I doubt if it is kids doing the damage. It is more likely drunken and drugged up adults. It would be extremely difficult to catch the vandals since the structure is located close to the shoreline, not the boardwalk and there is no place to put security cameras.

I’ve seen people bring various household tools to the beach, mainly shovels, so they can dig trenches for privacy from other beach goers.

Regardless, sometimes you just have to take the Rudy Giuliani approach, or learn to live with the destruction and accept the expense.

Here is another example. Today I was shopping at a local Grocery Store and witnessed-first hand- a young man enter the store on roller blades and blatantly stole 7 bags of snacks from the from of the store. He then rolled across the parking lot and appeared to be selling the stolen merchandise to a woman you apparently was using a walker. A few minutes before that, I saw the same woman steal bread from the lobby followed by the roller- blader going in and stealing. Several shoppers witnessed it. I reported it to the store manager and was greeted with indifference. If we continue to let people steal and vandalize our property, they will soon create an environment that will discourage the public from shopping at neighbourhood stores and using public spaces.

The solution to the problem is a difficult one, and it starts with people having the will and commitment to build a better community. I don’t think it matters what age group is doing the damage or the stealing, but it does mean vandals and thieves should be held accountable.

Anyway, its a complex problem and I just want to make sure I play my part.