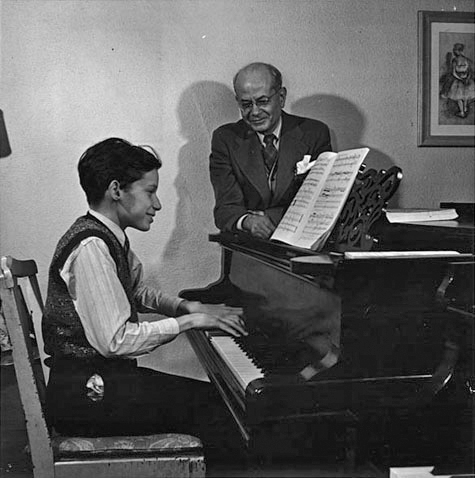 A young Glenn Gould is shown at the piano under the watchful eye of his teacher Alberto Guerrero. PHOTO: Public Domain

This July 1 at 1 p.m., I will lead a historic walk starting at our historic Beach library at Queen Street East and Lee Avenue. The theme of the walk will be the historic people and places of the Beach, the 150th birthday of Canada next year and historic plaques that identify the history of our area.

The Beach and East Toronto Historical Society has helped bring historic plaques to many different locations, marking the places and people who were involved in historic events. Any history you might think is appropriate, we will look at all aspects of your requests for plaques, to be done in association with the Toronto Historic Board, an agency of the City of Toronto.

For example, when we start our walk it will be in front of a historic plaque outside the Beaches Public Library. This plaque has been researched and on it is the brief history of the library (this year is its 100th anniversary). There will be an official ceremony to mark the installation of the plaque in October with librarian and history author Barb Myrvold, myself, and other members of BETHS speaking about the library and our area.

There are other historic plaques in the area. One is at the Beach Hebrew Institute, also known as the Beach Synagogue, on the east side of Kenilworth Avenue just south of Queen. It tells the story of the Jewish community organizing to build its own house of worship beginning in 1919-1920. This is one of the oldest synagogues in the city and is recognized on the historic plaque put there in 1982 by then-mayor Art Eggleton.

There is a plaque on Lee south of Queen on the west side telling the story of a great Beach physician, Dr. Young, who spent his life helping the people of the Beach and died while treating young soldiers after the  First World War.

We have a plaque for one of the greatest pianists who ever lived, on the west side of Southwood Drive, north of Willliamson Road. Glenn Gould was born and raised and went to school in the Beach. His reputation as a master of his instrument remains to this day.

We had many amusement parks on our shoreline over the past 140 years. There is a plaque at the bottom of Scarborough Beach Boulevard that gives us an account of one of our great parks. It was aptly called Scarboro Beach Amusement Park, and operated from 1907 to 1925. The plaque tells the story of the park, its original boardwalk, the midway, ‘Shoot the Chutes’, one of the first public airplane events in 1909 and other historic notes. This, again, is not to be missed.

One of our newest plaques is at 30 Lee Ave., on the west side just north of the boardwalk. It describes the Kew Williams House, the home of the youngest son of Joe Williams, who built our famed Kew Gardens. The house was built in 1902 by Kew for his bride, and the plaque gives a brief history of the house and the area. This again was installed through the efforts of BETHS and Heritage Toronto.

One of the most important plaques in the East End was put up by the Ontario government with different historical societies including BETHS. This plaque is devoted to the Ashbridge family, who were some of the first settlers to come to the area and start a community. The plaque tells the story of the Ashbridges who arrived in the 1790s and were important contributors to the area. The family later donated the house and land to the people of the area under the auspices of the Ontario Heritage Foundation. It is located at 1444 Queen St. E.

There is another plaque located at the present St. John’s Norway Church and cemetery, on the northwest corner of Kingston Road and Woodbine Avenue. It states the original name – St. John’s Berkeley. The land was given to the Anglican Church around 1850 by a wealthy land owner of the East End, to be used as a cemetery and church. I will hold a walk later this year at the cemetery to commemorate this historic place.

The ‘Norway Plaque’ across the street on Kingston Road tells the story of the hamlet of Norway that housed a toll gate, several taverns and one of our first post offices. The date was 1866, making it older than Canada.

As I have written in previous issues, I cannot recommend too highly to everyone to get involved in our sesquicentennial birthday of our great country. Schools, churches, mosques, children, adults, organizations, businesses: please share your thoughts and ideas. I will write again on the 150th birthday of our great country, but we need your ideas – anything that you might think to be important or historically relevant.