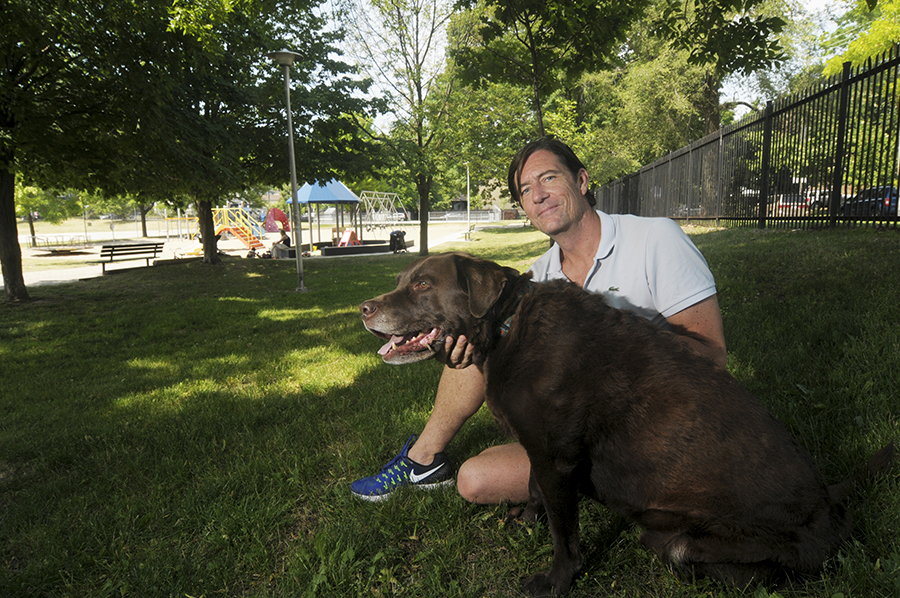 Peter Woodcock was more than a little surprised to find out he’d been named as the winner of the inaugural Clean, Green and Beautiful Award.

“It kind of caught me off guard,” he said, noting that he had originally felt honoured when he thought he’d only been nominated.

The award was handed out at Community Centre 55’s annual general meeting on June 7. The organization’s board and management decided to honour someone each year who makes positive improvements to a public outdoor space through some sort of project or initiative.

For Woodcock, that includes numerous activities in Stephenson Park, near Main Street and Danforth Avenue, after forming an association out of necessity. He was reading Ward 32 Councillor Mary-Margaret McMahon’s newsletter about local park cleanups.

“I said, ‘Hey, how come Stephenson Park isn’t on there?’ And she said, ‘talk to your park’s friends group.’ And hence how the Friends of Stephenson Park started,” he said.

In the short few years since the group began, it has hosted cleanups, bonfires, Canada Day celebrations, yoga in the park, an outdoor skating rink and more.

When he first moved to the area almost six years ago, Stephenson Park was not the family-friendly space it is now – at least not at all hours of the day. Woodcock witnessed drug deals, prostitution, and more, but between the cleanups and the regular activities, there’s a transformation in progress, thanks to the ongoing efforts of Woodcock and a small but dedicated group of neighbours who have been fighting to reclaim their public space.

“We’re trying to make it a nicer park and a safer park,” said Woodcock.

Jon Morrice, the crime prevention officer at 55 Division, appreciates the work the local residents around the park have been doing. In fact, he’s the one who nominated Woodcock for the award.

“A few years ago Stephenson Park was having a few problems,” said Morrice.

He is a proponent of neighbourhoods nurturing a sense of ownership over their parks, and believes a constant stream of activity, such as what has happened at Stephenson Park, is one of the best ways a community can discourage crime.

“Since then our calls for service for that sort of thing have decreased,” said Morrice. “It’s at its best now.”

Anyone interested in seeing how a small, grassroots community group can transform a local park – or anyone interested in cake, lemonade, music and a bonfire, among other after-dark Canada Day activities – is welcome to head to Stephenson Park on July 1 to say “happy birthday” to the country with a group of neighbours who know what the Canadian spirit is all about.

The Friends of Stephenson Park are on Facebook. Make sure to check in for details on the park’s weekly live music series later this summer.