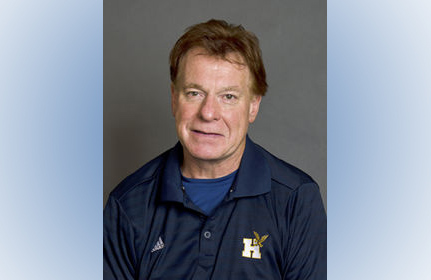 Bob Acton, a coach and mentor to many young players in the Beach and beyond, has died. Acton had been battling Amyotrophic Lateral Sclerosis (ALS) since 2014.

At the age of 60, Acton had been coaching hockey, baseball, and other sports for over 25 years.

Acton had a reputation of being tough on the ice, but gentle and friendly off the ice — traits that gave him great praise by most of his pupils.

“You can’t get better at anything if you don’t like what you’re doing,” he told us in January.

Donations to the ALS Society of Canada can be made in Bob’s memory.

I learned a lot as a coach from Bob, and he taught my oldest how to skate. Amazing technician on the ice and great guy. Thoughts to his family.

So sorry to hear this very sad news. Our sincere condolences to the family

My condolences to the family

Deeply saddened by the loss of Bob, great friend to the Muzyka family and mentor to our son. Definitely one of kind person on so many different levels. We will miss him dearly. Our sincerest condolences to the Acton family.

RIP Bob, my deepest sympathies to all Bob’s family and friends.

Godspeed Bobby. You had a great heart.

Sad to hear. My condolences to the family. Bob and I were friends back in high school. His sister ran across my brother in Mexico this past winter and gave us an update. Sleep well, my friend.

Our thoughts and prayers are with the Acton family.

Bob taught sports skills and, more importantly, character, through his knowledge, courage, caring and commitment. He inspired a lot of young people and left a real legacy. He will be sorely missed.
My condolences to his family.

Such sad news. He was a great man, a fun neighbour and an inspiration to many. A truly, honest, down-to-earth good person. Our deepest condolences.

RIP Bob my dear friend…, My deepest sympathies to his family and friends. My son’s first hockey coach and his life long inspiration…Rock solid facade with warmest heart you can imagine…

We wish to express our deepest condolences to the Acton Family during this difficult time. RIP Bobby, you will be sadly missed by all.

I remember the great times that I had with Bob (Bobby) Acton on the hockey rink when we played together. He was always one of the good guys, and I am saddened that he has left us so soon.

Building skills and character in kids for a generation! RIP Bob! You’ll be missed. Condolences from the den Ouden family.

Sorry to hear the sad news

RIP Bob spent many years playing sports with Bob since we were eight years old our Dads were Good friends and so were will
I will always cherish the great times we share.

Our condolences to Bobby’s wife and children, brother Patty and the entire family. Such sad news, you are all in our thoughts and prayers.

RIP Bobby……you will be missed. …Prayers

Bob Acton had an incredible spirit and love of life. He continually reinvented himself, and was dedicated to his lovely wife Heather, and his terrific children Avery & Reid.

I’ve never met a man who could intuitively break down the skill sets and strategies of hockey, baseball/softball & football like Bobby could. He loved the entire process of winning a game, and passed on that passion to his players and proteges.

He inspired his athletes to excel in school as well as on the playing field. He was incredibly proud of his athletes accomplishments both on and off the field. And, Bobby had legions of friends. He could tell a story, and make me laugh, and laugh and laugh.

Our deepest sympathies to Heather, Reid & Avery. A great man has left us. Rest in peace Bobby.

I met Bob when he was manager of Lido’s. He was so kind to us and treated us like gold. Then we reconnected when my son attended hockey with him. He brought the best out in Blake and Blake enjoyed working hard for him. He truly will be missed and our condolences to all of his family. Rest in peace Bob.

My children trained with Bob years ago and to this day still say…”Bob always said to….” He was a wonderful coach with high expectations of everyone who hit the ice. Deepest sympathies to his family. He will be missed by the community.

Played with Bobby at Monarch Park in the ’70s. Never loved a team I played on more. We called him Yukker back then, for his distinctive laugh. Talked to him for a story I did in the Star a year or so ago. He never complained once about the hand he’d been dealt. We just reminisced about the game and the camaraderie and the laughs. Good man, good teammate. Gone too soon.

What a contribution he made to young players and the Beach community and beyond…..Such an inspiration and courage through his battle with ALS People like Bobby motivate me even stronger through my own struggles in life…..Thank -You Bob.

Anna and I were saddened to learn of Bob’s passing. I played ball against Bob in the Beaches Church League and spent many hours at his parents’ house when I was younger. Our sincere condolences to his family and friends. May he rest in peace.

Kim and I knew Bobby and his family in our teenage years through sports and school at Monarch. We were very sad to hear of his passing from ALS.
We send our deepest and heartfelt condolences to his wife Heather and children Reid and Avery, and his siblings, Patty, Colleen, Mary Lou, Rosie and Mike.

Thanks Grant & Kim from the entire Acton family. We will miss him terribly.

My deepest sympathies to the family. Our son trained with Bob for several years and improved his game tremendously. But more importantly, Bob and his team were able to instill values of respect and responsibilities. He will be missed.

Our heartfelt condolences to Heather, Reid, Avery and the entire extended Acton family on the loss of Bob. He was a generous, kind-hearted friend and community leader and will be truly missed.

Thanks to each and all of you for your messages of sympathy and condolences. It is lovely for each of you to share your personal stories and memories. We are comforted by the fact that the positive impact Bob had on those he coached and interacted with will serve as a living legacy and tribute to all those in our community. I was privileged to call him family. #RIPBOB xo

I am very sorry to hear this. Bob was a fantastic coach for hockey teams I have been associated with, and in particular for my son, Alex who always said he was one of his favourites.

We are sorry to hear of the loss of your husband and father.

I am so sorry to hear about the passing of Bob. He was Great guy and we shared a bunch of goo times . My thoughts and prayers to the Acton family.