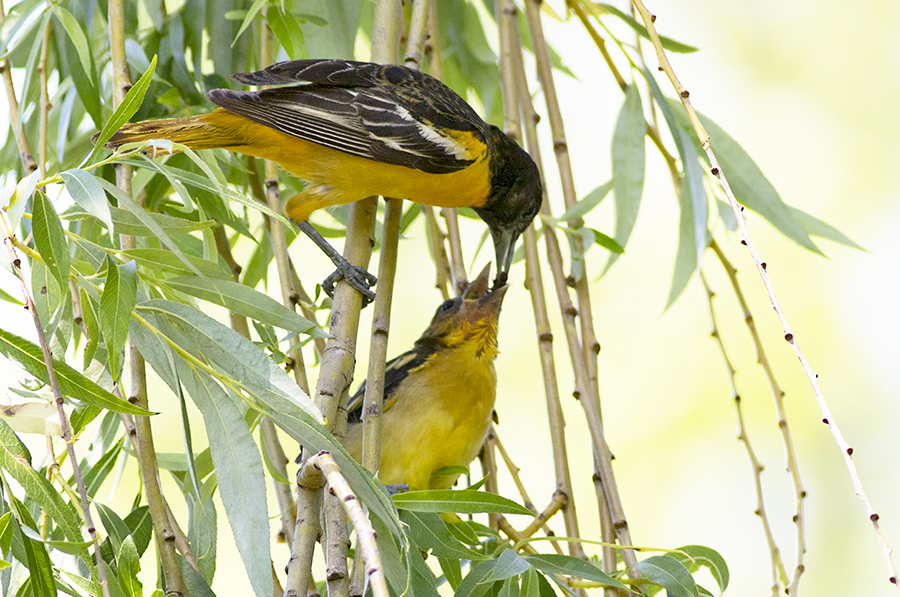 It is finally that time of year again, when the most beautifully coloured orange, red and yellow birds arrive and sing the uplifting songs we haven’t heard in far too many months.

Just the other day I was at Rosetta McClain Gardens with my birding buddy Carol, and we were blessed to hear a ‘chick-burr chick-churr’ sound we recognized coming from a nearby tree. We had to look high, high up the tree before pinpointing a magnificently attired scarlet tanager. Carol and I watched him eating bugs in the tree before, to our amazement, he flew to a lower branch where we could really see him clearly and even get a few nice pictures.

These birds are beyond striking and once you’ve recognized one, it’ll become one of the birds you’ll identify most quickly.

Tanagers are medium-sized birds and have blood-red bodies. If you’re thinking it sounds like I’m describing a cardinal, know that the red body of a tanager is set off by jet-black wings and tail, which is very different from the all-red male cardinal. Tanagers also have a smooth head, unlike the cardinal’s fancy head-puff.

A little while later when we heard the pure, liquid whistling tones of a Baltimore oriole. The male’s song consists of a loud flutey whistle with a sort of buzzing quality. If that doesn’t make any sense, search for a recording on YouTube.

The male oriole sings to establish and defend a breeding territory. This particular male was busy eating bugs off the flowering trees, then wiping his messy bill on the branches. As we continued to watch, we followed him to where he was making a beautiful woven hanging nest. If this fellow is lucky enough to find a mate, she will lay three to six eggs that are mostly pale blue with dark marks. The female will sit on the nest to incubate the eggs for 12 to 14 days, and then the young birds will leave the hanging nest another 12 to 14 days after hatching.

Now, if any of you were paying attention, at the start of this story I mentioned my interest of the arriving red, orange, and yellow birds. I mentioned tanagers (red), and orioles (orange), but what about the yellow birds? Any guesses? … Don’t forget about the females! Both female tanagers and orioles have prominent yellow markings where the males would have red and orange.

Finally, while I’m a proud supporter of Toronto’s baseball team, when it comes to birding I’ll choose an oriole over a jay any day of the week.