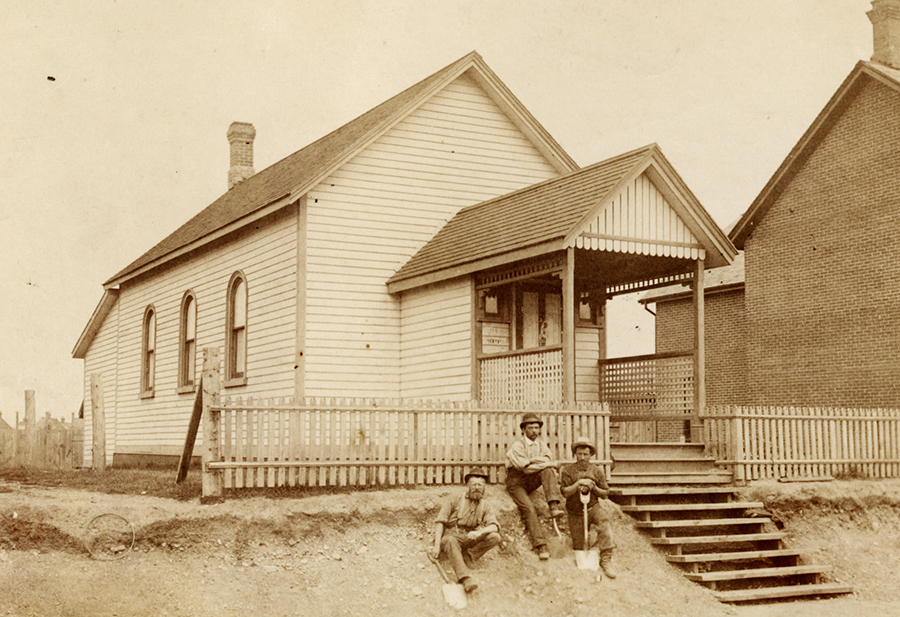 Read part one of the history of the former town of East Toronto.

After its initial formation in 1888 to serve employees and businesses serving the Grand Trunk Railway yard bounded by Main Street to the west, Victoria Park Avenue to the east, Danforth to the north and Gerrard Street to the south, the village of East Toronto expanded and grew by the thousands.

At one point East Toronto had its own streetcar line. In the early 1890s the Toronto and Scarborough electric railroad was founded. Starting at present-day Kingston Road and Queen Street East, it went east on Kingston to Scarborough, passing by East Toronto, which asked them for a spur line. The TSERR ran a spur up Walter Street to Main and Gerrard to accommodate the town – we were progressive a hundred years ago.

East Toronto had to rely on the GTR for its water supply. The railroad received its water supply from a stream and pond west of Woodbine Avenue, where the present East Lynn Park is located. The GTR needed the water for its gigantic steam locomotives and great roundhouse, and occasionally the residents of East Toronto had little or no water.

Eventually the town laid a water pipe leading from beside the Balmy Beach Club and pumped their own water to a giant water tank on Gerrard just east of where Ted Reeve Arena now stands. This gigantic tank supplied all the buildings around Danforth, Gerrard, Kingston Road – all the homes and businesses in East Toronto.

Another progressive direction East Toronto took was the construction of its own electric power house. Even after East Toronto was annexed to the City of Toronto in 1908 this power source was used for decades.

The village of East Toronto officially reached the status of town in 1903. At one time the population was equal to Scarborough’s.

The town, with the support of the GTR, had its own small hospital. It was part of the GTR YMCA, which was located where the present Ted Reeve Arena is. Besides providing a place for the railroad men to sleep, it had its own operating room and nursing station, before any other medical facilities existed in the area.

East Toronto was also a sporting hotbed. Behind Ted Reeve Arena was the GTR athletic field.

John Zeiman, who owned a clothing store on the west side of Main Street (his name is still inscribed on the front step of the store) became the manager and coach of a rugby and football team that won many Ontario championships. Baseball was first played at the Grand Trunk athletic field years before Kew Gardens or Balmy Beach started. Hockey was played for many years by the railroad men, and semi-professional baseball. Cricket was played in the same field. Golf, which was introduced in 1876 just west of East Toronto by James Lamond Smith, was popular in East Toronto, as was lawn bowling.

On the southeast corner of Main and Danforth was the Aberdeen Curling Rink, which housed ice skating and the first curling rink in the area.

Education in East Toronto – where should we begin? The town council appointed a board of education, which erected Balmy Beach School. Another of the original schools, founded in the 1880s, was Mary Street School, located at Main and Swanwick, now known as Kimberley and Beaches Alternative Public Schools. There was another school called Little York north of the Danforth. The Roman Catholic school called St. John’s was also a school to be reckoned with.

Members of the board were not happy to send their children to high schools outside the area, so they organized East Toronto High School, later renamed Malvern Street High School, a great academic and sporting school for more than a hundred years.

East Toronto was home to different religions housed in different buildings and houses – again, this story could fill a book by itself.

Many are still here, such as Hope United Church at Main and Danforth, Calvary Baptist on Main Street (this church was originally at Enderby and Gerrard), St. Saviour’s, then called the Railroad Church, Emmanuel Presbyterian on Swanwick Avenue, and St. John’s Norway, the mother church dating back to the 1850s.

Other churches included St. John’s Roman Catholic Church dating to the 1890s, the salvation Army at Main and Gerrard doing the great work, St. Aidan’s Anglican (originally a tent church with services held on Balsam Avenue, later Spruce Hill Road) and Kingston Road United Church with its origins on Beech Avenue – there are so many others, but there is not enough space to cover them all here. One thing is sure, East Toronto had its share of religions.

There is so much history left to tell: East Toronto had banks at Main and Gerrard; Snell’s Bakery, at the southeast corner of Gerrard and Main; so many different social and fraternal organizations. East Toronto even had its own farmers’ market. Yes dear readers, on the west side of Main Street we had the East Toronto Farmers’ Market.

I would like to point out some outstanding people: Benjamin Morton – an early councillor; Andre McMillan – a lumber merchant and house builder who served for many years; Dr. Walters – a very well respected physician who was also a mayor; John McPherson Ross – a pioneer at the Balmy Beach Club and one of the people responsible for planting many trees in the Beach and East Toronto area. There were others such as George Oakley or Robert Rogerson; these were only a few of the many politicians that served East Toronto for 20 years.

One must remember that East Toronto was run by very able and efficient people – politicians who, only elected for one-year terms, stayed on for many years. I could list the names of every elected official and paid town employee, but that is for another time.

So ends our brief history of the 20 years of the village and then town of East Toronto.

“Eventually the town laid a water pipe leading from beside the Balmy Beach Club and pumped their own water to a giant water tank on Gerrard just east of where Ted Reeve Arena now stands. This gigantic tank supplied all the buildings around Danforth, Gerrard, Kingston Road – all the homes and businesses in East Toronto.”

With regard to the water tank referred to in the quoted section above, I lived on Wayland Ave. in the 1940’s and 50’s. At the top of our street on the south east corner of Wayland and Gerrard was a rather large field which we considered as our own personal playground. At the very corner of this intersection was a large circular mound roughly ten feet high. On the top was a circular concrete ring which seemed to be the foundation for something. It was commonly understood that a water tower was located here. I therefore assume that this was the location of the water tower mentioned in your article. Wayland Ave. is three blocks east of Main, running south from Gerrard.

The field is long gone and replaced with, as I recall, a number of apartment buildings.