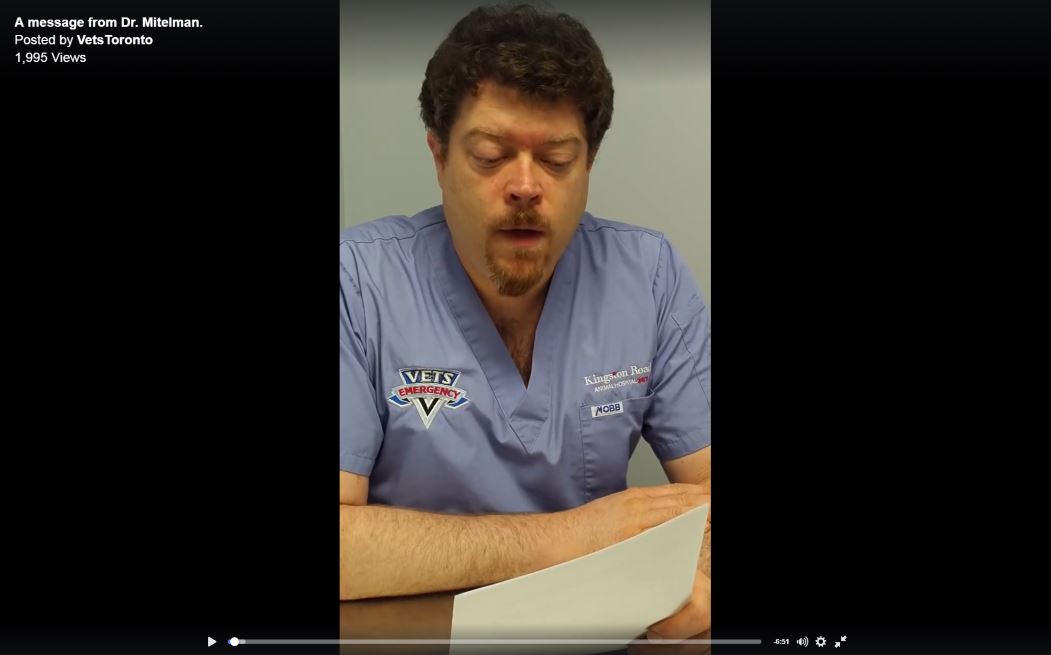 Dr. Jonathan Mitelman posted an apology video to the VetToronto Facebook page after being found guilty of professional misconduct by the College of Veterinarians. Video below. PHOTO: Facebook

A popular East End veterinarian has been found guilty of professional misconduct and serious neglect by the College of Veterinarians and will see his practice suspended throughout the summer.

Dr. Jonathan Mitelman of VetsToronto and Kingston Road Animal Hospital has been ordered to pay $85,000 to the college and complete various educational requirements, according to a brief posted to Mitelman’s profile on the college’s website. If he completes the required courses – particularly centred on pain management – his suspension will be dropped from five months to three.

In a statement posted to the clinic’s website and Facebook page, Mitelman details the college’s findings and the events leading up to the hearing and decision, rendered December 15, 2015. A full summary of the hearing and decision from the College of Veterinarians has not yet been posted to the college’s website and could not be obtained by press time.

The case goes back to 2011, said Mitelman in his statement, when the clinic took on an emergency case of a 14-year-old Shepherd cross who was unable to walk after being jumped on by another dog. Seven veterinarians were involved in the various diagnoses and treatment options, Mitelman said. Treatment went on for several weeks and ultimately ended when the dog was euthanized.

Mitelman said he failed to initially recognize the dog had a fractured leg, instead diagnosing the dog as suffering from a herniated disc. Because he was treating the dog as paralyzed, he did not administer the correct amount of pain medication for a dog with a fractured leg.

After the fracture was discovered, said Mitelman, another specialist attended to the dog and believed the fracture was due to trauma. Over the course of several weeks, specialists, and surgeries, it was eventually discovered that the dog had bone cancer. Mitelman said that the client continued to opt for surgeries despite being told repeatedly that the elderly dog might not walk again.

The clinic has “revamped and updated procedures for record keeping, pain management and client communications,” said Mitelman, noting that the experience has been a learning opportunity. He said the clinic will remain open throughout his suspension.

Mitelman had been appealing the decision, but recently abandoned his appeal. The original owner of VetsToronto, Dr. Morris Samson, whose license is listed as suspended on the college’s website following a decision in April 2015, was subsequently found guilty of professional misconduct for the same 2011 incident as Mitelman. Morris’s decision is still under appeal.

He saved a family cat from Montreal who had been misdiagnosed with a fracture. The Montreal vets insurance had to pay for the expensive restorative surgery. must be over 7 years ago, thankfully I believe this cat is still giving joy to another owner