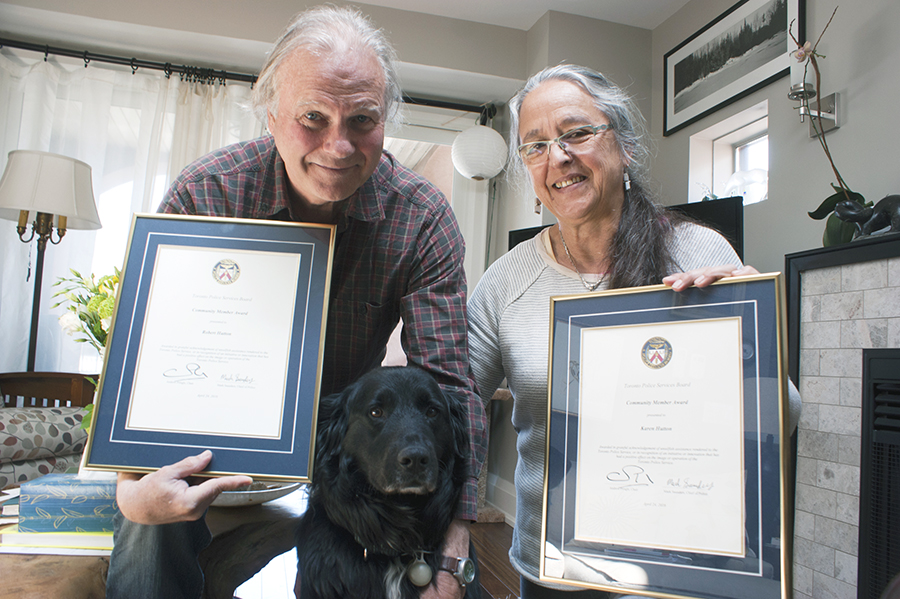 Bob and Karen Hutton, with pup Haida, at their home near the Beach boardwalk May 9, 2016. PHOTO: Anna Killen

To the east, new Beachers Bob and Karen Hutton were recognized for quietly saving the life of a young woman who nearly drowned in Lake Ontario at the beginning of the year.

The Huttons were walking their dog, Haida, on the beach on Jan. 4 at around 9:30 a.m. when they noticed what looked to be a piece of driftwood in the frigid waters ahead, metres away from a break-wall. As they approached, they realized it was a woman, and they sprung into action to get her to safety.

“It was the coldest morning of the winter, at that point,” said Bob. “The lake was just sizzling with mist.”

She said they were looking out at the water, bundled in snow pants and big jackets, only outside because Haida needed a walk.

“We’re looking at what appears to be a piece of driftwood in the water, and we’re thinking, ‘What is that?’ We’re staring at it, trying to figure out what it is, it’s just this black lump, and we get [closer] and we think, ‘Oh that’s a person,’” said Karen.

“I’m thinking, ‘Is it a polar bear swimmer? Does that person want to be in there?’ And we get to the part where we can actually talk to her and we yelled, ‘Are you OK?’ and all she said was ‘Help,’” she said.

“That was it. Low voice. And then she said it one more time.”

The woman was probably 10 feet away from the break-wall and appeared to be staying afloat because of her puffy down jacket. Karen began looking all over for people who could help, towards the lifeguard station to see if there was any safety equipment they could use, but the pair quickly realized that Bob would have to wade in and try to pull her out.

We knew we had to act when “we realized she was human and she responded, and there was nobody else there,” said Bob.

“There was absolutely no choice, we either got her in while she was alive or we were responsible for standing there and watching her die,” said Karen.

Bob walked into the water, which got up to his armpits by the time he reached the woman, who he guided to shore. Once out of the water, the pair asked her how she got in the water and she said “rocks.”

Karen said the windy conditions almost certainly created black ice on the rocks, and it’s likely she lost her footing and maybe hit her head, but they can’t be sure. They estimate she was in the water for about 15 to 20 minutes, judging from where she had drifted to and how long it took them to get to her.

“Later on you kind of question whether you did the right thing at the right pace. Did you do things quickly enough? Another five minutes and she might not have made it,” said Bob.

As Bob got the woman out of the water, Karen called 911 and was shocked when dispatch first put her on hold for several minutes and then was unsure where the Beach was located.

But with the guidance of two women that had come across the situation and joined them to help, the group directed the dispatcher to send an ambulance to the Balmy Beach Club, where they worked to warm the woman with towels. When rescue officials showed up, “they arrived in full force,” said Bob, and the woman was taken to hospital where she was placed under doctors’ care.

Bob and Karen don’t know who the woman is, and haven’t broadcast her rescue story. They are new to the neighbourhood, having moved here from north Toronto just over a year ago, and didn’t necessarily feel like it was their story to tell.

But in April they received a formal invitation in the mail that they were to be recognized at the Community Member Awards on April 24, and while they didn’t believe they needed thanks for their actions, they thought the ceremony would be a neat experience.

“It was quite stirring,” said Bob. “The other people that were recognized, they did some incredible things. Some of it was really moving.”

At the ceremony, the Huttons met Andrey Korikov, who was also being recognized by 55 Division for bravery in a situation he de-escalated in the fall, on the other side of the beach near Ashbridge’s Bay.

On Sept. 5, 2015 just after 10 p.m. Korikov was walking a friend back to her bike after a walk along the boardwalk – Korikov lives downtown but visits the Beach a few times a year – when he noticed three men surrounding another man who was lying on the ground. One of the three men was beating the man “severely”, said Korikov, and he walked over to assess the situation.

“It was pretty intense,” he said.

The victim looked to be in his 50s and his attackers were in their 20s. People were walking by but no one intervened, so Korikov broke up the group, yelling to stop and that the cops were on the way, and helped the man who was being attacked sit down on a nearby bench.

“He was just bleeding everywhere, his face is swelling, you can see there are probably a few breaks in there,” he said. “He was really disoriented too. He can’t really talk, he can’t really sit up straight, that type of stuff. Big concussion.”

Korikov told him he didn’t want to fight and tried to get the man to calm down.

“Eventually he tried to punch me so I had to put him down,” said Korikov. “I do martial arts.”

Throughout the situation Korikov knew that, because of his martial arts training, he would be able to contain the man if he needed to – he has been practicing martial arts for eight years and teaching for three, and runs free classes that combine jujitsu, Russian martial arts, and Japanese sword-fighting out of a community centre in Cabbagetown – but he was waiting to see if the situation escalated.

“In a situation like that you’re always planning, it just depends on what the person does first. Things can escalate really quickly, especially with three people involved,” he said.

“I put him down, I kind of locked him up on the ground. He was very surprised and that kind of sobered him up a bit, he just struggled a while and said, “OK you got me, I’m sorry, can you let me go please … Tried asking nicely, tried squirming, didn’t work. Tried screaming, tried yelling, tried swearing, tried telling me that if I let him up he was going to beat me, which was kind of counter-productive.”

But Korikov held him until the cops arrived, telling the man that after beating someone so badly he would have to deal with the cops.

Police and paramedics arrived, taking the hurt man to the hospital and arresting the attacker. The man was charged with aggravated assault, mischief to interfere with property and causing a disturbance. The matter is before the courts with a date scheduled for June 21. Korikov gave his statement to the police, who he said were very polite and shook his hand, and eventually went back to his car to find a $250 parking ticket (he didn’t end up having to pay it).

Speaking with the police afterwards, he learned that the attack on the man was completely unprovoked, and that the man might have been a good Samaritan himself.

“The guy who was beaten was just walking on the beaches, lived somewhere in the neighbourhood and saw the three guys who were there harassing two girls on the bench, the girls must have been 13 or 14 years old,” he said. “They were being abusive making comments, so he asked them to stop, and the drunkest guy of them all was about 25 and he attacked him. He just beat him pretty much to a pulp.

“He had a broken jaw in two places, he had a broken orbital, and apparently in the hospital they put him through three surgeries in the first night just to save his eyesight because one of the bone shards went into his eye. The doctor said that if he’d continued getting beaten for a while he could have died because that could have ended up in his brain. Definitely didn’t come too early, probably a little bit too late.”

Korikov hasn’t spoken to the man and said that as long as the man is OK, that’s all he needs.

“I don’t need any thanks, I don’t need any gratitude, I’m just doing what I feel everybody is supposed to do. I’m more surprised at the people who walked past – I’d have something to say to them,” he said.

Like the Huttons, Korikov believes there are bigger heroes in the world than him. When he first heard he was to receive an award he thought, “I don’t really deserve it. It’s not really anything that I feel should be commendable to that degree – there are really big acts of heroism out there, this should be minor in comparison. This should be common. If somebody is getting attacked, you shouldn’t just walk by.”

But he also believes it’s an “honour, humbling in some cases,” and can serve as a platform to encourage others to go through the world with a more communal mindset.

“If you walk past somebody, even if you don’t feel like getting involved, at least call 911, do something about it,” he said. “Or at least stand by, anything, yell at the people, tell them the cops are coming, it’s not that difficult.”