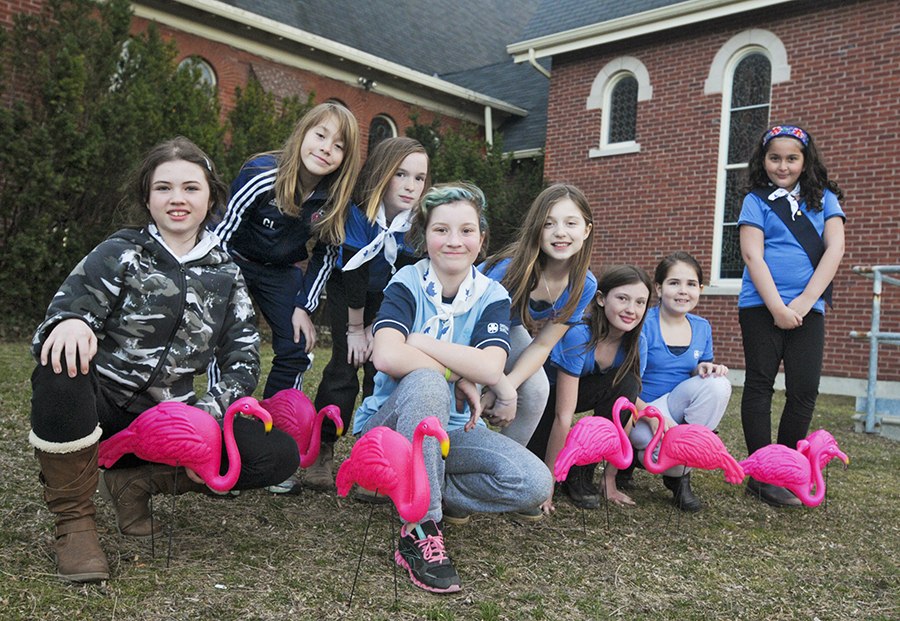 The 7th Toronto Girl Guides have been "flocking" unsuspecting Beachers in an attempt to raise money for a trip to Newfoundland this summer. PHOTO: Anna Killen

They strike under the cover of darkness.

Armed with pink plastic flamingos, suppressing giggles, the troops of the 7th Toronto Girl Guides have been leaving their mark across the East End for the last several weeks – and their battle isn’t over yet.

Have you been flocked?

Households have been waking up to find flocks of pink plastic flamingos decorating their front lawns as well as a note from the girl guides laying claim to the roost.

By afternoon, the birds are gone, en route to their next temporary nest.

The guides are fundraising for a trip to Newfoundland this summer – their longest trip together yet, where they plan to meet up with their girl guide pen pals and go whale watching – and residents and businesses are getting caught up in the flocking game.

It goes like this: If you are “flocked,” meaning you wake up to a batch of flamingos dancing on your lawn, you have the option to nominate the next person to be “flocked” and can contribute a donation.

Businesses help by placing laminate flamingos in storefront windows to spread the word and explain the fun taking place around the neighbourhood (no, a whole bunch of people haven’t been turning 50 this April).

The group hoped to raise $1,500, but believes it will surpass that goal thanks to the colourful spirit of the neighbourhood.

Group leaders Lee-Ann Murphy-Martinez and Steph Beeley decided on the flocking fundraiser because it seemed like a unique way to supplement the traditional girl guide revenue stream of cookies and raise the extra money for this big trip. Instead of having the girls flock each night as a group – there are 11 going on the trip, relatively small for a guide troop but still a bit large for a covert mission – the girls go out in pairs with a parent volunteer.

“It’s really hard because you have to have the perfect timing and you have to be very careful, if the lights are on, that they don’t see you,” said guide Lauren Walker. “We’ve gotten caught a few times.”

What happens when they get caught?

“And some of them just ignore it,” chimes in guide Camden Kubbinga. “They might have known what was coming.”