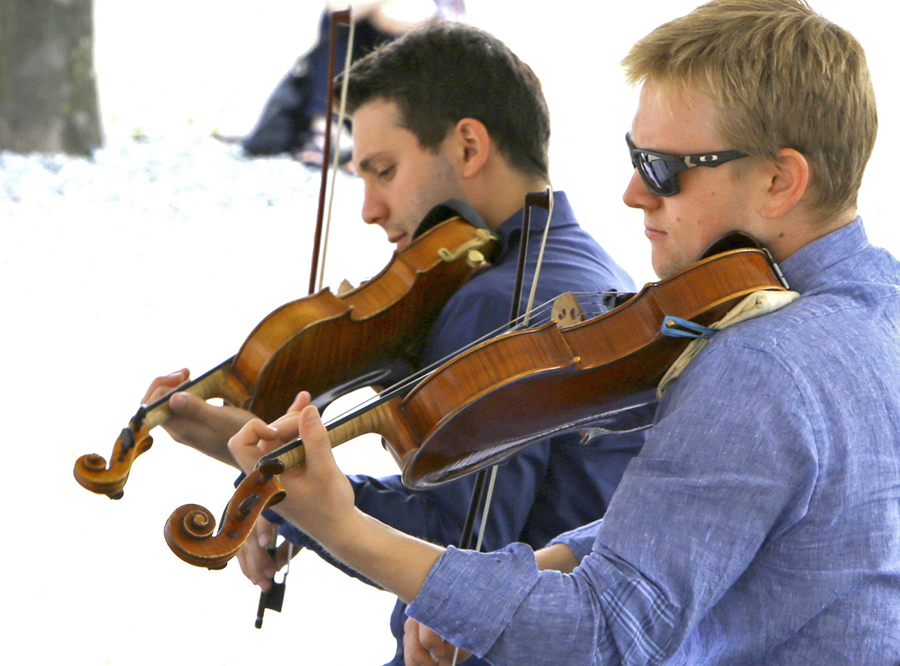 Violist Keith Hamm will be joined by violinist Aaron Schwebel for the final instalment in The Viola concert series. On Sunday, April 24 at 1:30 p.m., Hamm and Schwebel will perform a one-hour program chosen by the musicians.

Hamm is a native of Alberta, and is making a name for himself on the Canadian classical music scene. Trained at the Glenn Gould School of Music and the Royal Conservatory, he has performed across the country. He is principal violist of the Canadian Opera Company Orchestra, and founder and artistic director of the Rosebud Chamber Music Festival in his hometown of Rosebud, Alberta.

Admission is $20 at the door of the Seicho-No-Ie Centre, 662 Victoria Park Ave., just north of Danforth. Bring a non-perishable food donation. Proceeds will go to the church’s renovation project.

David Occhipinti will debut his Art Song Project as part of the TD Discovery Series Special Projects on Sunday, April 24. The Messenger is starting to pick up steam, with screenings at 80 US and 20 Canadian theatres booked, and a few awards won.

The documentary film, directed by Su Rynard, uses the fate of songbirds to hold a mirror up to humanity’s environmental state of affairs. From Toronto, where the film was conceived and work started in 2010, to Mount Ararat in Turkey, from the fields of Saskatchewan to the streets of France, the film looks at man-made threats to birds such as thrushes, warblers, orioles, tanagers, and grosbeaks. Everything from light pollution to habitat loss is investigated, accompanied by some stunning and innovative ultra-slow-motion cinematography.

Jackson, Rynard, other producers and some film participants including Michael Mesure from the Fatal Light Awareness Project will hold a Q and A session and discussion after the Wednesday screening.

Under the artistic direction of Mervin W. Fick, the choir will perform music by noted composers including Grammy winners and Juno nominees. Work by Paul Halley, Leonard Enns, Paul Hindemith and more is on the program, exploring the theme of love.

The Iridescence Wind Quintet featuring clarinetist Peter Stoll will be special guests of the 60-voice chorale.

Greg Pilo’s weekly jazz jams happen Tuesday nights from 7 to 10 p.m. at Salty Dog Bar and Grill, 1980 Queen St. E. There is no cover. Tonight, Tuesday, April 19, drummer Pilo will be joined by Perry White on saxophone, Reg Schwager on guitar, and Dave Young on bass. On Tuesday, April 26, the quartet will include Pat LaBarbera, saxophone, Brian Dickinson, piano, and Neil Swainson, bass.

Jazzy Sundays continue at Morgan’s on the Danforth, 1282 Danforth Ave. near the Greenwood subway station. On Sunday, April 24, Lisa Particelli’s ‘Girls Night Out’ jazz jam – where gentlemen are welcome too – will be on stage, featuring Mark Kieswetter on piano. Steve Cole, Russ Boswell and Shawn Nykwist will perform on Sunday, May 1. Performances run from 2 to 5 p.m. with no cover charge.